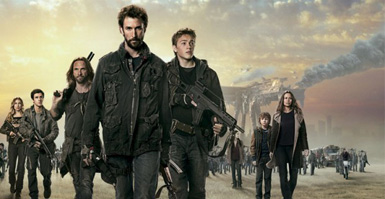 Like any master illusionist, the writers of FALLING SKIES have managed to catch our attention with a whole host of eerie aliens inhabiting a brand new apocalyptic world that barely resembles the world we know.  They scared us silly with the unstoppable machine-like Mechs that trample all in their path in a hail of bullets and firepower.  They terrified us with the introduction of the Skitters, the creepy bug crawlers that lurk in the darkness and who posses an uncanny intelligence that rivals our own.  Then, at the end of the first season, they beguiled us and teased us with the introduction of the Overlords, mysterious beings that beckoned with their long fingers and silently promised to reveal the answers that Tom Mason desperately sought to save his son.  But that promise was more an invitation to see why resistance was futile — and for a little personal payback for the recent attack which the survivors and 2nd Mass had struck against the aliens.  So while Tom’s hopeful mission to find a cure for his son Ben did yield answers, they were not the ones he was searching for.

The second season opens with Tom Mason still in alien clutches and uncertain when and if he will ever see his sons and the 2nd Mass survivors again.  Three months have passed and with Tom’s fate is unknown, he is presumed dead.  As for the 2nd Mass, the hum as are fearful and hunted — fleeing for their lives.  In the aftermath of last season’s successful attack, they sparked the ire of their alien occupiers, who are no longer content to allow the humans to hide and perhaps strike again.

The first season of FALLING SKIES was about the survivors learning that they could strike back; the second season is about reclaiming their planet.  Vastly outnumbered, outgunned and no significant resources to tap into to stage another strategic attack, the 2nd Mass is uncertain what should be their next move.  Yet there is a spark of hope with Tom Mason’s return; that is until there are signs that Tom could be an unwitting tool that could expose them all.  The returning hero could be their last chance, or he could be their downfall.  Unwilling to take any risk, John Pope is the most vehement in stressing his concerns and is outraged that no one else is willing to concede that Tom’s return is suspicious.  Whether Tom is a threat is a mystery in and of itself, but really what better way for the aliens to destroy the morale and strength of the survivors by waging a bit of psychological warfare as well as outright attacks?

The deeper one peers into the motivations of the aliens, the mysteries abound.  We have been so dazzled and distracted by each new alien that we have forgotten to pay attention to the motives of the aliens.  There are still so many questions to be answered:

Why did the aliens come to Earth in the first place?  What does our planet that they could not get somewhere else?  How did they find us?  Were they hiding amongst us for centuries before their final Earth-shattering attack, or did they literally just drop out of the skies?  With all their vastly superior knowledge and technology, why did they not devise better ways to protect themselves? Do they really just see humans as “insects” and of no consequence that they arrogantly believed there was no threat from humans?  If Ben is turning into a Skitter, where did all the other Skitters come from?  Were there Skitters before the Mechs and Overlords came to Earth, or was that the alien-form they created out of the humans they could capture and transform?

The “why, how, when” questions really hang over the show and yet we seem to have to forgotten about them.  The illusion is so brilliantly executed that we barely register that the real questions are:  not how to fight back; but really, why the aliens came in the first place?  The urgency of day-to-day survival and the plight of Tom Mason, his three sons Hal, Ben and Matt and the other 2nd Mass survivors drew us into the trap of only seeing their immediate needs and goals from a myopic vision.  But sooner or later, everyone needs to take a step back and assess what is really going on.  Fighting to survive is a worthy ambition; fighting to kick the aliens off our planet is laud worthy as well.  But the better quest is to figure out what they want and how to keep them from getting it.

Season one was about intelligence gathering, but even more information is needed before another effective strike can be massed. So season two of FALLING SKIES has a lot it will tackle. There are the ripple-effects of Tom’s return and how it either draws the 2nd Mass together or cause it to fracture from within; for divided they will fall.  There is the torn loyalties of those who want to believe in Tom and yet know that it may not be safe to do so. There is the wildcard, Pope, who only knows that there is a threat in their midst and he wants it neutralized before anyone gets irreparably hurt. And lastly, there is Ben.  Really, this season only appears to be Tom’s story.

For those paying attention, this season is all about Ben.  Barely able to control his rage and anger at the aliens who abducted and tormented him, Ben is the one to watch.  Those spikes in his back are both a blessing and a curse.  They endow him with special abilities and a potential weakness.  It is definitely time to adjust the focus lens and pay close attention to the boy that is fighting for his life, his freedom and the ability to remain human.  Scale by scale, Ben knows that his fate is a ticking time bomb on all that he holds dear.

So as the time is running out for Tom and Ben — and Pope may hold the linchpin.  Pray that Captain Weaver, Dr. Glass and Hal can keep their ragtag group together amidst so many perilous stressors, and that fate delivers them the one weapon they really need to have a chance at reclaiming their planet.

It is not about striking back; it is about winning.  It is time to show these aliens that Earth is not someplace they can call “home.”  It’s our home and we are going to fight for it — to the last man, to the last breath, and we shall prevail.  Humans may look inferior, but the unpredictability factor has always made us the victor.  It’s time to solve some of those mysteries and take back the planet.