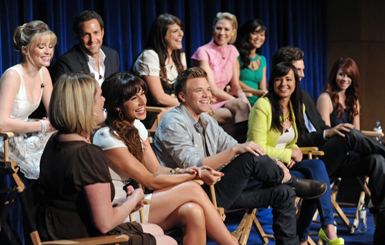 The summer of 2011 will be remembered for its successful launch of several fun television shows, but queen of them all is the MTV comedy series AWKWARD.  Premised on a young teen who gets an anonymous letter on her 16th birthday, which leads to a series of comedic errors as friends and family believe she tried to commit suicide after receiving it, the show is a delicious blend of teenage angst wrapped in a colorful ensemble of characters and cheeky humor.  In fact, the entire series feels like a “love letter” to modern high school life.

Starring Ashley Rickards as Jenna Hamilton, the girl who feels invisible until suddenly everyone knows her name – but for the wrong reason – she infuses the show with believability and charm, particularly as Jenna has a knack for tripping into hilarious circumstances and yet manages to pull it off with aplomb and good-humor.

Rounding out Jenna’s high school world are Tamara (Jillian Rose Reed) and Ming (Jessica Lu), Jenna’s her best friends who share in Jenna’s desire to breakout of the “invisible zone”; Matty (Beau Mirchoff), the guy that she has been secretly seeing who does not want take their relationship public; Valerie (Desi Lydic), the zany high school counselor who means well but who inadvertently stirs up more trouble; Sadie (Molly Tarlov), the girl who delights in tormenting Jenna whenever she can and whose razor-sharp observations are the bane of Jenna’s existence; Lissa (Greer Grammer), the sweet girl who unfortunately follows Sadie’s lead and who is desperately trying to keep ahold of her boyfriend who has taken a shine to Jenna; and Jake (Brett Davern), the guy who just wants to sweep Jenna off her feet and tell the whole world how much he cares about her.  Then, on the home-front, there are Jenna’s parents Lacey (Nikki DeLoach) and Kevin (Mike Faiola), who only want the best for Jenna, no matter how unusual their parenting methods.

High school is an unusual and yet remarkable time in every young adult’s life.  It allows one to experience the most humiliating and outrageous scenarios that life will ever throw at you – just to see how you will react.  It is the making of most of people as it provides the chance to see that, no matter what, one will survive.  It is only a matter of deciding if you are going to survive by retreating into a dark hole, or if you will embrace all the experiences and make them a part of who you are.  In AWKWARD. Jenna is a resilient survivor.  No matter how ugly and cruel the comments were in the anonymous note she received, she rose above those biting criticisms and embraced her life.  In the process, she discovered that she has great friends, good-hearted parents, and two young men who love her.

As season one ended, Jenna was confronted with an incredible choice: does she give Matty one more chance to be her boyfriend, or does she accept Jake’s offer and perhaps discover another great relationship? Jenna ultimately chose Jake at the end of last season, but ever since then, the debate has raged on: Team Jake vs. Team Matty, which deserves to win Jenna’s heart?  As the second season opens, Jenna is confronted again with a big choice, is she ready to make her relationship with Jake “official”?  This time it is Jenna who must decide if she is in this new relationship one-hundred percent.

Simultaneously, in addition to her romantic entanglements and decisions, Jenna also found out that her mother was the one who sent her the “anonymous letter.”  Jenna must decide if and when to confront her mother about why she did such a hurtful thing.  In addition, should her father be let in on this terrible secret?

One would like to think of high school as being all about parties, dances, euphoric young love, and friendships that will stand the test of time.  But really what makes all those things so special are the trials one endures.  Jenna is not just sailing through high school, she is making hard decisions and learning what it is like to live with consequences of choices.  Fortunately for her, she has found a way to “make lemonade.”  AWKWARD. embraces how incredible “awkward” teenage life can be, but tempers it with a healthy dose of humor.  The show carefully weaves heart and humor into each difficult situation and we cheer for Jenna every step of the way.

So in season two, AWKWARD. takes us all back into Jenna’s world where she will navigate even tougher choices and have a blast throughout.  She will make decisions about her relationships with Jake and Matty, whether to confront her mother, and the best way to get her hands on an elusive sex-tape which may or may not have her on it.  (That’s where the Asian Mafia comes in.  It pays to have friends all over when you are THAT desperate!)

At the recent premiere party at the Paley Center in Beverly Hills, the cast of AWKWARD. took a few minutes to chat about their characters and what lies ahead in Season 2:

In great anticipation, we look forward to the 2nd season premiere of AWKWARD. which airs at 10:30PM on Thursday, June 28th on MTV (MuchMusic in Canada).  Whether you are Team Matty or Team Jake, you are going to love this new season of AWKWARD. Photo Credit: Photo Credit: Kevin Parry Photography