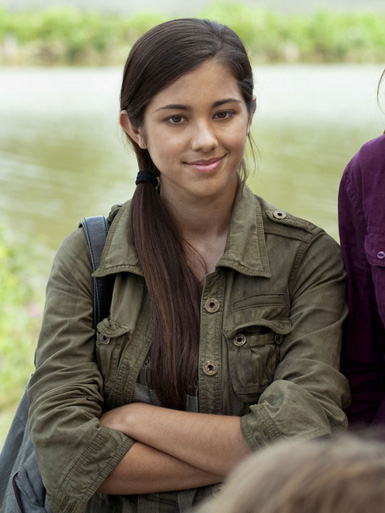 In a strong ensemble series like TNT’s alien series FALLING SKIES, each character is given a chance to shine and now that the show is in its second season, more of the characters that were briefly introduced last season are beginning to see growth and challenges ahead. Such as in the first season, Seychelle Gabriel’s character Lourdes was just an eager young medical trainee anxious to learn and contribute to the resistance.  Yet this season, Lourdes is blossoming into a young woman with confidence in her abilities and who has caught the eye of an engineer who joined up with the 2nd Mass, Jamil (Brandon Jay McLaren).  In an exclusive interview, rising star Seychelle Gabriel talked about what she is enjoying in the second season of FALLING SKIES. 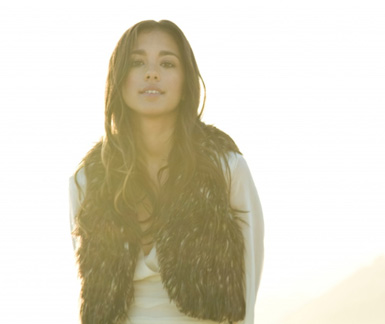 After two seasons working on FALLING SKIES what do you most appreciate about the show?
Seychelle: My castmates.

Can you elaborate?  For example, do you have a favorite moment or scene that you worked out that you can share?
Seychelle: I really enjoy most of my scenes with Moon, and this season we have a few really intense ones down the line where we get caved in and run around screaming with shotguns and stuff.  That was crazy, and pretty damn fun.

In portraying Lourdes, has there been any changes in how you portrayed her in Season 1 versus Season 2?
Seychelle: Definitely, but I mean down the same line, as well.

What has been Lourdes’ internal journey in the midst of all this tough fight for survival in a world occupied by savage aliens?
Seychelle: It’s been a traveling from dark to light kind of thing.  She’s constantly putting her efforts into things that will distract her from thinking about what has already happened, but hasn’t forgotten about any of that either.  And those memories will definitely come to surface a bit this season.

At this point, what is the one thing that you most admire about Lourdes?
Seychelle: She’s such a team player, but never jeopardizes who she is uniquely.

For you, what has been the most challenging or tough aspect of portraying Lourdes so far?
Seychelle: Just kind of getting into that sense of loneliness, and understanding what it’s like to not have any family or friends left, except the few that she’s made in the 2nd Mass.  I’m always talking to my parents or friends or something, and thinking about having that all cut off can be a trip.

Because nearly all of your scenes seem to be with Moon Bloodgood’s character, Anne, will we be seeing Lourdes interact more with other characters in the 2nd season?
Seychelle: Yes, a couple new ones!

Are there any characters that you wish that Lourdes would have more of a chance to interact with?
Seychelle: Always. I mean it’s such a big cast, it would be cool to work with everyone all the time, but that’s just not how it rolls.  I did have a little ditty with Pope a time or two this season, and I really enjoyed that.

Because Lourdes is receiving medical training from Anne, have you receive any specialized training to portray the role or is it something that you are learning as the show goes along?
Seychelle: Both, for sure.  I’ve talked a lot with my family and friends who are nurses or pre-med students (even sat in a couple classes) and gotten their perspective on the arena, and that was definitely the most helpful.

What about fight training? Have you participated in gun training to get Lourdes more prepared to fight back against the aliens?
Seychelle: Not really, but I did learn how to hold it and check the safety. Very advanced stuff.

How big a part does Lourdes’ faith play in this 2nd season?  Does it lead to any conflicts between her and the other survivors or is it something that she keeps comfortably just for herself?
Seychelle: Yeah, it’s something she’s kept more to herself this season.

Assuming that there will be a 3rd season of “Falling Skies,” do you have any hopes of where your character will go storywise?  Things that you would like to see Lourdes do or issues she has to face?
Seychelle: Yeah, I have some hopes, but nothing too specific.  I think if anything I’d like to get really up close and personal with the aliens, join a crazy mission with the Mason boys.

As a teaser, what do you think fans should keep an eye out for in the upcoming second season?
Seychelle: A certain skitter…

Finally, do you have any other projects that you are working on that you can share and talk about?
Seychelle: Nothing really at the moment, just wrapped up second season of “The Legend of Korra,” which is airing now. I’m loving watching it myself, and am pretty stoked at how much everyone’s digging it too!

With young love on the horizon for Seychelles character Lourdes, and hints of a particular Skitter to keep a close eye on, fans are going to love seeing where the second season of FALLING SKIES takes the 2nd Mass survivors.  FALLING SKIES currently airs Sunday nights at 9PM on TNT. Catch up on past episodes you may have missed for free online at clicktowatch.tv. Photo Credit (Second Photo): Andrew McLeod