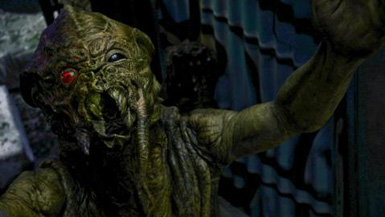 Four episodes into its second season, FALLING SKIES is continuing to ramp up the action and bigger story arcs of the season.  In “Worlds Apart,” we watched the return of Tom Mason as he was welcomed back as both a hero and possible threat to the 2nd Mass.  In “Shall We Gather At the River,” the 2nd Mass tried to overcome the threat of being boxed in by the aliens who were now tracking them doggedly in order to prevent another attack.  In “Compass,” Pope and Tom came to physical blows and Pope found himself asked to leave the survivors; while Ben came to grips over the death of his friend Jimmy.  Then in last week’s episode “Young Bloods,” Captain Weaver’s daughter is found with a group of young children, who had to be rescued before they can be harnessed by the aliens.

Last season, the 2nd Mass had a little time to regroup at various points before being forced to flee again.  But this season, there is no such luxury as the aliens are angry at the attacks made by the survivors and have been relentlessly pursuing them to eliminate the threat.  It is not just the constant traveling that distracts the 2nd Mass, but the fact that they have painted a bulls-eye on their backs.  Before their desperate attempt to strike back and blowing up the alien’s ships, they were a mere nuisance; now they are a threat that the aliens will not tolerate.  So it is not just about surviving and discovering ways to strike back; it is about finding allies in the fight.  In “Compass,” they found out that there may be a large organized military effort in Charleston.  Thus, believing that their best chances in the ongoing resistance lies with a larger, better equipped group, the 2nd Mass is slowly en route to Charleston.  But with fuel, medicine and other necessary supplies critically low, it is going to be a struggle to travel the last remaining 500 miles.

In the upcoming July 8th episode “Love and Other Acts of Courage,” the survivors are confronted with a new proposition in their ongoing fight, but from an entirely unexpected source.  Two familiar faces return, one which is welcomed and another which is not.  The offer they receive is controversial and requires a level of faith that they are just not ready to accept yet, and it puts Tom in the crossfire once more.  Then while on a scouting patrol, Hal and Maggie are given a moment to reflect on their slowly blossoming romance – albeit in the most close-quartered circumstances. The episode not only brings up issues of trust and whether it is ever possible to trust the enemy; but challenges the faith of each person as they must decide what they value most: survival at any cost, or to survive with those we love. What price are we willing to pay?

Then in the July 15th episode “Homecoming,” the episode poses the question of whether those that return can be trusted.  As Ben and Tom have both seen and experience first-hand, all those who are rescued or released are not always welcomed.  So when another lost survivor returns, emotions and distrust are running high.  It leads to a mind-twisting episode, and Hal, Maggie, Tom, and Ben are all tested emotionally and physically.  Simultaneously, Captain Weaver has a rough ordeal of his own as he deals with the complacency that has set in amongst the 2nd Mass, and his own eroding health.  With fuel running dangerously low and a critical life-saving procedure needed, it falls upon Jamil, Lourdes and Anne to save the day.

Then in an action-packed, deadly episode, on July 22nd in “Molon Labe,” all hell breaks loose.  One of their own has betrayed them and it leads to a bloody confrontation with the aliens.  This episode introduces a brand new species of aliens, which is guaranteed to make your skin crawl; and surprisingly, the youngest Mason will have a major part to play and he gets to be the hero for a change.  It ends up being a standoff in which both sides sustain losses and negotiations seem futile.  But it also serves to reaffirm that the aliens have more to fear than just the 2nd Mass and the other human survivors.  That information proves vital and it propels Ben to make a major sacrifice in order to do everything he can to strike back.

By the end of the 7th episode, it will be clear exactly where this season is going.  FALLING SKIES is not about surviving and striking back, it is about kicking the invaders off the planet.  It is about taking back what was ours.  But in order to fight an intelligent and more heavily armed occupier, something more effective is needed – that weapon is about to be revealed.

Finally, it is clear that in its final three episodes on August 5th and the 2-hour finale on August 12th, FALLING SKIES is ramping up.  With the clock-ticking, there is little time to rest, regroup and strategize.  It is time to act, to fight and to use every tool and person available.  The aliens will not stop coming, nor should we.  The human resistance has surprised them and it threatens them, let’s now see how we can cripple this massive alien army and bring it to its knees.  It is time to show them that humans will not cower in the darkness, but will strike into their heart and make them know what it is to feel fear – if for the first time ever.

Whatever you do, don’t miss one single second of the upcoming episodes of FALLING SKIES, which airs Sunday nights at 9PM on TNT.  The war is coming.