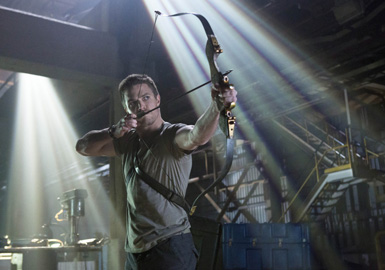 You’ve seen the commercials. You’ve heard the hype. Now there’s only one thing you want to know: Which of the new fall shows are worth watching and which should be avoided at all costs? In this continuing series, we give you the scoop on some of the most highly-anticipated shows of the season, with today’s subject being The CW’s ARROW.

The Plot: After being left for dead on a deserted island for the better part of five years, former billionaire bad boy Oliver Queen returns to Starling City a changed man. Enter Arrow, his green-hooded alter ego intent on avenging the wrongs of his family and restoring Starling City to its former glory.

The Snap Judgment: A hero who kills! A love interest who’s interesting! By golly we’re really not in SMALLVILLE anymore. Which, with apologies to the millions who fell in love with the iconic man in tights flannel button-downs, is just one of the many reasons we’re so excited for the CW’s re-imagination of [GREEN] ARROW. Other reasons include: A perfectly cast titular character in actor Stephen Amell who brings with him the requisite mix of charm and chops, Katie Cassidy’s delightful legal eagle/love interest Laurel Lance who proves that the third time’s the charm (See: Previous stints on The CW’s GOSSIP GIRL, MELROSE PLACE), and the mysterious matriarch that is Susan Thompson’s Moira Queen who may in fact end up giving REVENGE’s Victoria Grayson a run for her money in the not-so-mommy-dearest department. And since we’re on the subject of REVENGE, we’d be remiss if we didn’t mention the curiously coincidental parallels to the hit ABC series, also known as the real strength of the show. As a result of circumstances we’re not about to spoil here, what executive producers Greg Berlanti and Marc Guggenheim really get right, aside that is from the colorful collection of characters cast, is ARROW’s stellar setup. Complete with compelling flashbacks that paint a pretty gruesome picture of what is motivating our hero moving forward, Oliver’s backstory doesn’t just do a phenomenal job of putting an interesting spin on a somewhat familiar origin story, but colors his current predicament by providing him with a handful of targets. Targets that will presumably afford Amell with ample opportunity to make use of those abs as he navigates the dark and dangerous waters of a world in which nobody is who he or she appears to be.

The Conclusion: : In a post Christopher Nolan Dark Knight world, ARROW is right on target.