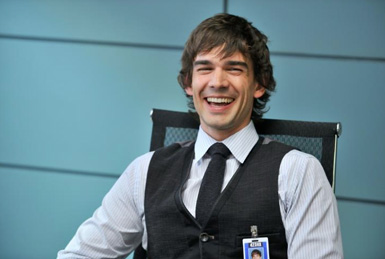 The world as Annie and Auggie know it is about to change dramatically in the 3rd season of the spy drama COVERT AFFAIRS.  In the first episode back, something so big and earth-shattering happens that no one is left untouched or unscathed.  At a recent set visit, star Chris Gorham provided a few cryptic hints and teases about how the show is changing and what it means for the various relationships for the characters on the show.

On the Season Three Bombshell
CHRIS: I felt like in the second season we were really trying to make everything bigger; then in the third season I really feel like we’re just trying to go deeper with everything, and get more complex, which I think makes the show better. It’ll be interesting.  I mean, the first episode is huge and it kind of changes everything.  It changes everything for the entire season.  So it’ll be really interesting to see what the audience reaction is and how they respond to the new tone of the show.   I mean, one of the realities of the CIA is that it’s a dangerous place to work, and anything can happen, and there are consequences to your actions; and so we really see that this year.

Switch from Stand-Alone Episodes to Serialized Storytelling
CHRIS:  It’s the same show, but the storytelling is really different.  It’s much more serialized than it’s been before.   We have one mission that everyone’s kind of working on in their own way that lasts the whole first 10 episodes.  Annie’s working an op with a guy and that operation lasts for the whole first season.  So the show has turned into really something that you’re gonna wanna watch live — that you don’t want to miss it because at the end of every episode there’s these huge revelations.  Everything feeds into everything else.  Our writers, Chris and Matt and the whole team, really took a lot of time in the off-season making sure that all of the pieces fit, and that everything fits together at the end, and everything happens for a reason.  So plot wise, everything fits together and is very serialized.  The other thing is it goes deeper than we’ve gone before.  All the emotional stuff is bigger.  There’s an urgency to this year that we didn’t have as much last season.

Annie & Auggie’s Relationship
CHRIS:  We kind of opened the door to the Annie and Auggie relationship at the end of Season 2. So we’re exploring that.  To me, in a way, that’s very real for those two people are right now.  They’ve both have very complicated lives, and the fact that Auggie’s blind has allowed us to play with the relationship in a way that you can’t do with any two other characters.  It’s a lot of fun for us to do.  In the second episode, Annie and Auggie go on a mission together. They go on a mission together and they have to pretend that they’re married.  That’s their cover that they’re a married couple.  So that’s fun. Episode 2 is Annie and Auggie in a hotel room.

Auggie & Parker’s Relationship
CHRIS: If I remember correctly, Auggie’s been and come back, and then he goes again.  Yeah, I think that’s right.  So we don’t see that first trip.  But then Auggie goes off to Eritrea and we see what happens with his relationship with Parker.   We have a big episode, Episode 3, that is a big Auggie episode with relationship stuff there.  And we have pirates. The pirate episode, that’s a heavy Auggie-Parker episode.  It’s a really good episode.  It’s one of those where, kind of like the Istanbul episode, where Auggie doesn’t go out on a mission, but circumstances require him to call on all of those faculties.  Like he’s there with a very specific intention regarding Parker who he is very much in love with and then there’s pirates.  Do we see beach scenes?  Yeah.  Do we see bathing suits?  We do.  Episode 3 is bathing suits on the beach.

Auggie & Jai’s Fractured Friendship
CHRIS:  It’s really interesting.  Their relationship at the end of last season had really fallen apart.  It’s always fun for a Sendhil and I to play together because with those two characters they don’t really like or trust each other, but they do have a respect for each other.   So it’s been fun.  Yet at the end of last year Jai poached two of Auggie’s top guys and basically burned that bridge.   So we do have what I think is a really interesting follow-up to that reality now in this season.   It’s good.  But there’s a price to be paid for the things that happen, and I think at the end of the day with the Auggie-Jai relationship, and with Jai in general, I think it’s not always what it seems.   So there are surprises there.  It’s gonna be an interesting resolution to what was started last year.

Prequel Webisodes
CHRIS:  The webisodes are kind of a prequel. The webisodes take place a year before Annie comes to the CIA, and follows Auggie on one of his early missions as a handler, right after he’d been promoted by Joan to his current job that we see on the show.  So he’s not quite as good with his brail and his laser cane, and all of the stuff.  He’s learned very quickly, but he’s only a little over a year away from recovering from his injury and he’s doing what is still a very new job.   So it’s been kind of going in and finding ways to show where he was a year before Annie joined, when we first met Auggie.  So there’s gonna be a lot of little details that we have in there that are gonna be fun for fans and fans of Auggie, for sure. There’s five of them, and they’ll be aired with the first 5 episodes.  It’s interactive,  kind of like a choose-your-own-adventure thing.  So within each webisode there are two points where the audience can choose where the story goes.  And then at the end of those five weeks, a linear version is going to be available on Video-On-Demand.  The scope of our webisodes is going to be pretty impressive.

More Exotic Locations
CHRIS: We shot in Barcelona.  So far we’ve been to Morocco, which was for a couple different episodes.  Then Barcelona for the second episode with Piper and I, and then Puerto Rico.  Also this season the show’s going to be in Cuba, thought we’re not shooting in Cuba.  So it’s another big year.

With those fantastic teases in mind, you do not want to miss one single second of the 3rd season of COVERT AFFAIRS, which returns July 10th at 10PM on USA Network.