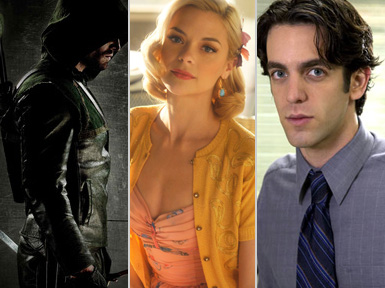 What kind of Comic Con coverage can we expect from theTVaddict.com this year? — Dylan
The TV Addict: An exhausting amount thanks to our West Coast Correspondent extraordinaire Tiffany Vogt, who alongside her team will attempt to hit up the press rooms of many of your favorite shows including: PSYCH, BEAUTY & THE BEAST, ELEMENTARY, NIKITA, CULT, ARROW, HAVEN, FALLING SKIES, TEEN WOLF, SPARTACUS, WAREHOUSE 13, GRIMM, THE FOLLOWING, ONCE UPON A TIME, PERSON OF INTEREST, REVOLUTION, THE VAMPIRE DIARIES, LOST GIRL, MERLIN, FRINGE, SUPERNATURAL and DOCTOR WHO. Needless to stay, stay tuned to theTVaddict.com all weekend long for exclusive photos and video as fast as I can edit it!

Any word on what’s in store for the denizens of Bluebell following last season’s very eventful HART OF DIXIE finale? — Jane
The TV Addict: Suffice it to say, the aftermath of George and Lemon failing to make it down the aisle will be front and center when HART OF DIXIE kicks off its much-anticipated second season this Fall. In typical Lemon fashion, the former bride-to-be will take the implosion of her relationship with George as a sign that it’s time for her to grow up, move out of her father Brick’s house and get her very first paying job at of all places the Rammer Jammer! And speaking of Bluebell’s most infamous watering hole, expect Wade to waste little time in making his intentions with Zoe clear, who sadly, will be forced to go back to square one in terms of assimilating herself into the tight-knit town now that all of her progress has been for naught following her presumed role as “home-wrecker” in the destruction of George and Lemon’s happily ever after.

Would love some news on my favorite fictional family, the Bravermans. — Allie
The TV Addict: Since TVGuide.com has already let it slip that eldest daughter Haddie will very soon be leaving the nest for College, you may be pleased to discover that the Bravermans are adding another bundle of joy to their brood. No, Adam and Kristina will not be having another child, but rather will consider giving Max a friend of the four-legged variety! Which should certainly add some fun to PARENTHOOD’s second episode back next.

Any ida how showrunner Shonda Rhimes plans on filling the void left by Lexie and Teddy’s GREY’S ANATOMY exit? — Rachel
The TV Addict: Indeed we do. Unfortunately, it spells bad news for fans hoping Cristina might replace Teddy (Kim Raver) as the hospital’s hotshot heart surgeon. Or at least that’s our takeaway from learning about the recent addition of Mel Barnett, a talented Doc hoping to escape the Florida sunshine for Seattle whose speciality is none other than Cardiothoracic Surgery. [Cue sad trombone in 3… 2… 1…]

Just how extreme is this OFFICE makeover we’ve been hearing so much about? — Bran
The TV Addict: Pretty extreme. In fact, word on the street is that THE OFFICE is already casting about for their B.J. Novak replacement. Enter “Pete,” Dunder Mifflin’s newest low man on the totem pole. Think Ryan, circa season one, but 85% less douchey and 150% more flirty. Particularly with cute baristas he spies during his frequent office coffee runs.

Finally had the chance to check out ARROW during its preview screening at Comic Con last night. LOVED IT! But curious if there are any plans to introduce any other DC super-heroes into the mix? — Jake
The TV Addict: While we have no doubt that Stephen Amell’s Arrow will eventually come face to face with some familiar friends and foes, that kind of super-stunt casting will more than likely be saved until the show has found its own footing. Case in point, theTVaddict.com has just learned that ARROW’s upcoming second episode will see go mano-a-mano with a beautiful Asian assassin named Wen who is sent after Laurel as retribution for prosecuting a businessman whose cushy relationship with the mob has become a blight on Starling City’s not so sterling reputation.

Before I jump back on the SMASH bandwagon I’m going to need assurances that Ellis really is gone? — Jen
The TV Addict: While we can’t promise that we’ve seen the last of the asinine assistant, we can assure you that Eileen has a new assistant this year in the form of a 60-year old sweetie named Liz. Read into that what you will.

Any intel on what’s in store for our favorite boys and girls of ROOKIE BLUE? — Davey
The TV Addict: Despite barely hitting the halfway mark of ROOKIE BLUE’s fantastic third season, the show is already prepping for a fourth. Enter Chloe and Marlo, two officers with little in common except for the fact that they will complicate the lives of Dov, Andy and Gail! Gail in particular, who we hear be forced to pay the price for some incredibly bad decisions she makes during the show’s upcoming first ever cliffhanger-style finale.

FALLING SKIES Scoop Please! — Miller
The TV Addict: Appropriately titled “Homecoming,” Sunday’s episode will mark the rescue of Jessy Schram’s Karen from the Skitters. More importantly still, it will also mark a shocking turning point in Ben’s story arc, who will be forced to choose sides after a heart-to-heart with fellow harnessee Karen.