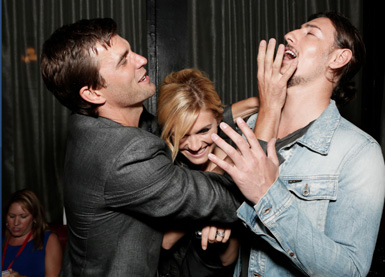 It was a special night as fans mingled and partied with the cast, producers and writers of the television series HAVEN at the Sidebar nightclub in San Diego last Thursday night.  As a last minute fun surprise, it was announced that HAVEN would be hosting a party and a few lucky fans were invited to join in the festivities.  It was the equivalent of winning the geek-lottery as it was a rare opportunity to talk with those behind the show that has captured the hearts and imaginations of fans across the globe.

Sponsored by Entertainment One (eOne), the night glistened with promise and anticipation.  The nightclub was decked to showcase the night’s featured show with posters and themed décor, as well as serving such fun libations as The Emily Pomtini and The Nathan Mojito.  Then taking a spin in the DJ booth, co-star Eric Balfour cranked out the tunes for the those mixing it up on the dance floor.  He jump started the set with a remix of the signature HAVEN theme-song, which was met with loud cheers and whistles from the appreciative audience.  Then, as Eric whipped the night into a dancing frenzy, his co-stars Emily Rose and Lucas Bryant laughingly posed with each other and a few lucky fans.

Joining in the HAVEN festivities and taking a turn on the red carpet to chat with press before mingling with fans were the stars of Cinemax’s FEMME FATALES, and other celebrities including Emu Phillips (“Yesterday Was a Lie”), Chase Masterson, Kipleigh Brown, director James Kerwin, Corri English (“Holliston”), Todd Stashwick (“The Devil Inside”) and hockey player Michael Guilbert.

The atmosphere was laced with expectation and exuberance as everyone celebrated HAVEN’s success and pending return for its third season.  For the 500 plus fans gleefully packed to the walls inside the Sidebar nightclub, mingling with stars Emily Rose, Lucas Bryant, Eric Balfour, along with producers Sam Ernst and Jim Dunn, and writers Brian Millikin, Nora Zuckerman and Lilla Zuckerman and more behind-the-scenes execs was pure heaven.  It was a night to be remembered and which will be forever etched on the hearts of those lucky enough to share in the momentous celebration.