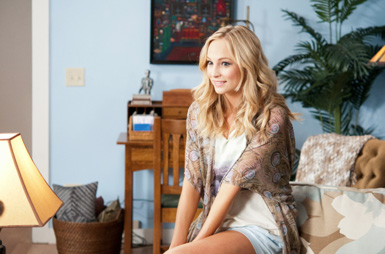 After a record breaking 14 million views for its first season, the online web series sensation DATING RULES FROM MY FUTURE SELF returns with a new season starring THE VAMPIRE DIARIES’ Candice Accola.  After the storybook ending for Lucy (portrayed by Shiri Appleby) last season, the second season follows the roller-coaster love life of Chloe Cunningham.  Chloe has determined given up on love after deeming herself a “loser magnet,” but just when you give up on love, it finds a way to convince you otherwise.  In an exclusive interview, star Candice Accola talked about starring in and producing the current season of DATING RULES OF MY FUTURE SELF.

Can you generally describe how you became involved with DATING RULES FROM MY FUTURE SELF?
CANDICE:  I worked with Bob Levy and Alloy Entertainment before on THE VAMPIRE DIARIES, so that was the initial beginning of it all.  It was just a great opportunity from Alloy Entertainment, Bob Levy and Chip Reed to come and be a part of the project and I was very excited from the very beginning.  I also play a part as a creative producer in the second installment of the series and really got to be hands on and learned so much about a different side of the business, which I’ve grown to respect and love on a whole new way even returning to a series solely on the acting and creative side of it.  It’s interesting to have a new perspective of thinking about things with a business sense.  So that’s really how I got involved in working on the series.  I was just elated at the opportunity to play around with comedy with muscles that I haven’t necessarily worked before.

Was there something when you read about the role of Chloe Cunningham that just jumped out at you and you just thought, “I can do that! That’s my role.”
CANDICE:  In reading the role of Chloe, a 26 year-old who is a single girl living in Venice and experiencing dating life after completely deciding that love does not exist.  I, on the other hand, do believe in love.  I believe in love a lot.  But I’ve definitely been through changes in my life and discovering the possibility of true love.  So I believe that’s a very normal roller-coaster to ride in your 20’s. When I got back to Los Angeles, I was actually staying in Venice.  I rented an apartment in Venice, a bunch of my girlfriends lived in Venice, and I have a clothing line that works out of there.  It was just so relatable — all the girl’s nights dinners.  It was so relatable and on point to conversations I was having in my group of friends that it was just a great opportunity to kind of live in that world and highlight the comedy of that world of being a 20-something and single.  Especially in L.A.  It can be a very hard city to date in since it is a very big city.  Yet it has the best stories.  All my friends were single as well over the summer, so everyone was bringing their stories to the table and then having it all of sudden pop up in the scripts.  Just the parallels between what the story was and stories that I was actually hearing in real life.  There were the same, so I loved that.  I loved that they were just so in line with each other.

Did you ever get the sense that they were following you around and you were on a reality show and they weren’t telling you?
CANDICE:  [Laughs] No, but I feel like I’m fascinated by my 20’s and this specific time in my life and my girlfriends’ lives.  I have some friends in their 30’s and they’re like, “You’re 20’s are so hard!”  It’s that constant little voice in the back of your head that is constantly asking questions and trying to find the answers, and constantly stressing and worrying; but it’s also such a great time too. So I think it’s so relatable.  I think that as much as we all like to think we have our own problems and no one could understand, those dating woes are actually so relatable to everyone else’s.

As producer, do you have a hand in shaping the storylines?  What exactly do you get to do wearing the different hats?
CANDICE:  As creative producer, they brought me in to discuss storylines, contribute ideas, contribute my own perspective or funny quotes or funny things from my own life or from my friends’ lives.  We kept like a summer “log book” of ridiculously hilarious quotes from our dinner nights with me and my girlfriends. So just exploring some of those and being a part of the casting process.  They really just took me under their wings and showed me this other side of the business that I’ve been eager to see.  I’m just so grateful to be able to learn from people that I hold highly in regards to this business.

Were you able to write some of the advice that Chloe gets from her future self?
CANDICE:  Actually, in the second season, the app that Lucy had developed has evolved.  It’s now become a face-time app.  So now instead of receiving texts, Future Chloe is actually face-timing Present Chloe.

That’s cool!
CANDICE:  Yeah, it was.  Definitely reading it on the paper it was tricky, but with some wigging and makeup and the different tonality of the two characters — there’s a difference in who you are at 26 versus who you are going to be at 36, and just making sure that those are two different characters in their own evolution.  But it was really fun to play an older version of Chloe as well.

You mentioned you had a hand in casting.  Can you hint at the kind of men that Chloe may be encountering along her journey this next season?
CANDICE:  I’m excited that Reid Ewing was a part of Season 2.  He’s in Episode 1, playing Andrew.  There’s also a lot of great talent as well throughout the series. It was great fun!

So will Chloe be going on many dates this season, or will she be exploring one potential relationship this season?
CANDICE:  There is a series of many dates.  Then we’re also going to be getting to know a past relationship that may persuade her to change her stance on love not being real.

To see exactly how love sneaks up on Chloe and persuades her to give it another chance, as well as to see Candice shine in such an effervescent role, be sure to watch DATING RULES OF MY FUTURE SELF, which premieres August 1st on Hulu and beginning Thursday, August 2, it will also be available on Facebook.