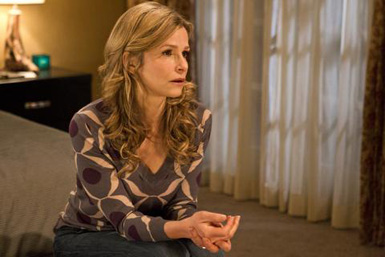 In a rare feat, TNT is simultaneously closing the door on its hit series THE CLOSER while debuting its new spin-off series MAJOR CRIMES.  Creator and executive producer James Duff likes to describe MAJOR CRIMES as more of a “continuation” series since as the final scene of THE CLOSER ends, minutes later MAJOR CRIMES picks up exactly where it ended on the same night.  With a very clever sleight of hand, one series ends allowing its lead Kyra Sedgwick, who delightfully portrayed Deputy Chief Brenda Leigh Johnson for the past seven seasons, a graceful exit while Mary McDonnell takes center stage in the new series with her character Captain Sharon Raydor — though everyone is quick to describe the new series as more of a true ensemble series, which will allow all the characters expanded storylines and screen time.

But no matter how they do it, it will still be a goodbye for the fans who have cherished the time that Kyra portrayed her now iconic character, Brenda Leigh Johnson.  It is also a time to say goodbye for a few other familiar faces and characters who will not be regularly appearing on MAJOR CRIMES.  After the penultimate episode’s big reveal that Lt. Gabriel (Corey Reynolds) was the inadvertent department leak through his girlfriend, who had been paid to befriend and gain Gabriel’s trust by the notorious attorney Peter Goldman (Curtis Armstrong) and Det. Flynn’s (Tony Denison) wise advise to transfer, we knew that Det. David Gabriel would also be moving on.  In addition, Chief Pope (J.K. Simmons) has been angling since Day One for a big promotion and he is likely to get his wish granted, leaving another hole in the world we have come to know and love as THE CLOSER.

Yet how these characters stage their exit may surprise you.  THE CLOSER cast, crew, writers and producers have worked diligently to create a storyline that will satisfy fans and yet provide the hook necessary to lure them to the new series.  Rumored for weeks, if not months, that a death would be involved and that a central villain would be returning for the finale, the final episode of THE CLOSER is not looking to go quietly into the night.  It is aiming for a much bigger send off.

As seen in the previews, the villainous Philip Stroh (Billy Burke) makes his deadly reappearance.  For years, Brenda has dogged his footsteps and worked tirelessly to catch the devious criminal who has eluded her through his legal expertise.  But every great criminal eventually makes one mistake.  Just how will Philip react when he realizes how close Brenda may actually be this time?

At a recent screening of the finale with fans at the Roosevelt Hotel in Hollywood on August 7th, the cast and producers of THE CLOSER were quick to remind the lucky few that they need to keep any and all spoilers to themselves.  But if the reactions of the fans at the screening were any indication, they were satisfied.  The party, gloriously sponsored by TNT and Lincoln (who had flown in winning fans from around the country for their turn on the red carpet with the stars of the show), was filled with beaming faces, cameras flashing, fans hollering from the bleachers, and news crews ready to capture every moment on film, the night glittered with pride and happiness.   Missing from the festivities were Kyra Sedgwick, Mary McDonnell, and J.K. Simmons, but the rest of the cast were there to mingle with the fans and happily recount some of their favorite memories working on THE CLOSER and their hopes for the new series MAJOR CRIMES. Though James Duff nearly had a heart-attack when during the Q&A one fan admitted that she had never heard of MAJOR CRIMES and had not realized that nearly the entire cast would still be working together on the continuation series.  So in case you too are still a bit fuzzy about it:  the show is losing a few faces and being renamed MAJOR CRIMES, but essentially everything you have known and loved about THE CLOSER will still be there:  Detectives Flynn, Provenza, Tao, Sanchez, Commander Taylor, Buzz, Agent Fritz Howard, Captain Sharon Raydor and Dr. Morales — and with a little luck, perhaps a few more.

Over the years THE CLOSER took viewers into the confession room where Brenda Leigh Johnson elicited confessions from the most hardened and ruthless of murderers.  Not constrained by law to be truthful herself, Brenda’s lies to commiserate with and get the guilty talking were surprising, yet effective tools.  Yet even when Brenda was fully within the bounds of the law, her tactics seemed to verge on a slippery slope of ethics.  One such tactic lead to the heinous Johnson Rule, stemming from the death of Turell Baylor, whereby police are no longer allowed to abandon suspects or citizens in situations where their lives may be at risk.  Still chafing under a rule bearing her own name, seeming to make her culpable for a non-existent crime, Brenda has struggled to find a balance between necessary police tactics to capture criminals and procedures set in place to make her job increasingly difficult.  It served as a reminder that justice remains elusive in our legal system.

Seeking to highlight this realistic problem, THE CLOSER has not backed away from the personal and professional cost to those who do their best to bring justice to victims of violent crime.  Similarly, MAJOR CRIMES will continue to address this thorny issue throughout its series.

To see exactly how THE CLOSER wraps its final episode and says goodbye to Brenda Leigh Johnson, be sure to tune in on Monday, August 13th at 9:00 p.m. on TNT.  Then watch the premiere of MAJOR CRIMES at 10PM that same night on TNT to see how our heroes continue the fight against crime and sticky politics.