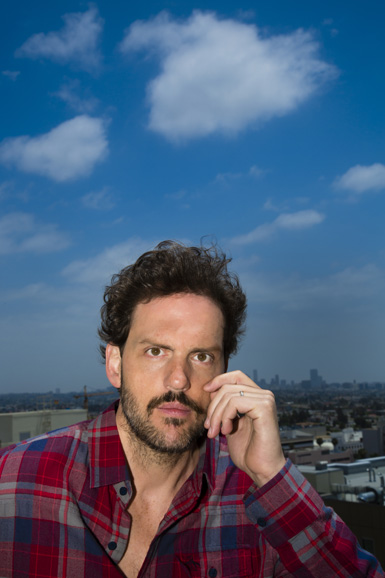 Last year’s biggest surprise and the first breakout sensation of the television season was NBC’s supernatural series GRIMM.  It invited viewers into a world where the Grimm fairytales were gruesomely real in our world today.  The unknowing Detective Nick Burkhardt (David Giuntoli) was thrown suddenly into this murky world upon his aunt’s death and suddenly people around him looked a lot different.  Some were distinctly non-human and he found out that there had been a multitude of creatures called Wesen living amongst us for centuries.  Fortunately for Nick, he quickly discovered one true ally in his quest to figure out what was going on and in his fight against the Wesen:  Monroe, the blutbat with a heart of gold.  In an exclusive interview, Silas Weir Mitchell shared what is next in the upcoming season for Monroe, Nick and all their friends.

How far along are you into filming the second season?
SILAS:  We’re about to start Episode 7.

So how quickly does the second season start from where we last saw everyone in the first season finale?
SILAS:  The second season just starts off with just guns blazing.  I mean, it really gets off to a roaring start, and it picks up right after where we left off in season one and it just doesn’t look back.

The first season left some great cliffhangers, the big one being with Juliette and the infection she sustained.  Is that going to be addressed right away or is that the mystery that is ongoing throughout the season?
SILAS:  Both. It gets dealt with right away and it remains a mystery.

Does Monroe perhaps, because he has an affinity and some extra senses, suspect that something may be up with Juliette?
SILAS:  Juliette is in deep doo-doo, and everybody because of Nick wants to help him, so we’ll try to help her.  But it doesn’t necessarily mean that it works.  People try.

How quickly do they begin to suspect that what Juliette is going through extends beyond just an infection?  For example, when we last saw her, she had regained some consciousness and her eyes looked all black, like she was possessed, which was spooky.
SILAS:  [Laughs] They were black weren’t they?  I think she’s a little “under the weather.”

So what’s up with Monroe’s romantic life?  It seemed like he and Rosalee (Bree Turner) were headed towards coupledom last season. Is that something we’re going to be seeing more of?
SILAS:  I don’t know about “coupledom,” I think that’s jumping the gun a little bit.  But I don’t think it would be unfair to suggest that Monroe may want to take her out on date one of these days.

So they are taking baby-steps towards a possible romantic relationship?
SILAS:  Yeah, I think we’re going to slow play this one, you know what I mean.  I think Monroe and Rosalee are wounded and tentative, but clearly there is an affinity there.  The idea of two Wesens that are two different types trying to living in the human world in a more positive way, it makes sense that they would kind of start orbiting each other a little bit.

It was exciting to hear that Bree Turner would be returning as a regular this season.
SILAS:  Definitely.  She’s an apothecary and that’s a hugely important element — that there’s this place where you an make these potions and spells and things.  So they are taking that element seriously.  Then as for Monroe and Rosalee — or as Bree coined it at Comic-Con “Monrosalee” — Monrosalee is a viable duo.  It doesn’t necessarily have to be romantic, but it might be.  Like I said, there’s an affinity there.  But Monroe had his heart broken by Angelina, so he has to be careful to not let that happen again.

With Rosalee and the apothecary world expanding, will Monroe be getting out into the field as much?  Will we be seeing more of the badass side of him coming out and working with Nick in the field?
SILAS:  Monroe gets out there a little bit more.  I think it’s less of a reluctant thing and a little like, “Okay, this can work. This could be fun. I know it’s challenging; it’s dangerous, but if I’m going to be out in the world, I might as well be out in the world swinging and not just tip-toeing through it.”

So Monroe is willing to step up and be a part of the fight now, and not content to sit on the sidelines?
SILAS:  I think the nature of it is that as the relationship gets more solid, Monroe trusts Nick and he doesn’t want to be on the sidelines all the time.  He sees stuff going on and he thinks, “I can do that.  I’ll try that.”   Like if you see a bunch of people playing with guns, you want to try it.

Monroe seems like he began to take a lot more initiative as the season progressed last year, so it’s nice to see him more actively involved.
SILAS:  Yeah.  He feels a little less used by Nick for information if he can actually get out and do something.  So that’s part of the motivation to get out there.  It’s like, “Yeah, I’m not just your personal Wikipedia.  I would actually like to participate.”

Monroe also took quite a beating from his own kind because of his association with Nick.  Did that help solidify things for him?
SILAS: Yeah, I think that scene at the end of that episode where Monroe is beaten up and he essentially says, “I’m not running from these people. Let’s take the fight to them.” You punch a blutbat in the face, that doesn’t go down easy.

It sounds like in the second season they decided to go no-holds barred and just go for the action.  How hard has that been for you to take on that more rigorous role?
SILAS:  They are doing a lot more action.  It is a more badass season.   Like Nick is getting his Grimm on and sort of badassing it up.  There’s more physical work for sure, but that’s why God invented stuntmen.  [Laughs]  Our stunt coordinator Matt Taylor got nominated for an Emmy and he is awesome. So we’re in good hands as far as that goes.

Another storyline the show dabbled with last season was with Captain Reynard (Sasha Roiz) and whether he had a particular alliance one way or another.  Is that something the second season will be exploring right away or is that going to be an interwoven mystery through the season?
SILAS:  Yes.  We’ll learn a lot about him early on.  There’s a definite mystery about that guy and some of it is revealed.

Can you share a favorite moment from the first season?
SILAS:  There were so many, honestly.  Just the whole getting picked up.  I’ll tell you what, being the first showed renewed by NBC was pretty amazing.  I was knocked out.  I was like, “Wow, they’re serious.”

It’s an addictive show.  You may not feel it as much because you work on it, but for those of us who watch it, it’s addictive.
SILAS:  It’s great to hear that.  I like the fact that it’s not something we have seen before.  That’s my favorite thing about the show, that it is unique.  It’s a unique take on the world. It like that’s fun. It’s fun for people — it’s psychological, mythological, kind of metaphorical world that is also very grounded in reality.  So it shows the world we live in a kind of light that I think is sort of disturbingly accurate.

Whether “disturbingly accurate,” it certainly makes for a fun show, particularly on a Friday night.  People are exhausted from their work week, and it is so entertaining and invites you into this interesting world.
SILAS:  That’s great to hear.

The first season of GRIMM is currently available on DVD from Universal Studios Home Entertainment. If you missed any part of Season 1 or simply want to relive all the fun adventures all over again, be sure to check it out. The DVD boxset also contains never seen before bonus material, including an interactive GRIMM book describing the various supernatural beings featured on the show, deleted scenes, a gag reel, and clips of the special effects used to create all the Wesen creatures.

As the tagline aptly describes the show: “They are not fairytale, they are warnings.  Discover what goes bump in the night in the chilling breakout series GRIMM.”