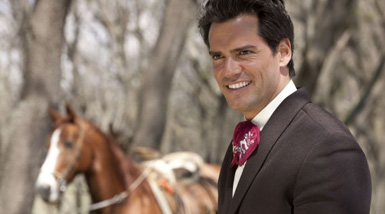 The new television series AMOR BRAVIO is a sweeping saga of a young man and woman whose fate gets swept up in the changing tides of destiny.  Cristian de la Fuente stars as Daniel Diaz Acosta, a young man forced to flee and make a new life for himself and his journey intersects with a young woman Camila (Silvia Navarro), whose life has also taken an unexpected turn. In an exclusive interview, Cristian de la Fuente talked about the romance and adventure of his new series AMOR BRAVIO (When the Heart Commands).

How did you get involved with AMOR BRAVIO and what attracted you to the character of Daniel?
CRISTIAN:  I got a phone call from Carlos Moreno, the producer awhile ago and he asked me to be in the project and then he sent me the first 10 scripts.  I’ve never been a good reader. As a kid I didn’t like to read a lot.  But I remember starting to read the scripts and as soon as I was done with the 10 of them, I asked him if he could send me more cause it was a great story.  It really attracted me because it’s not just a love story — there’s a love story in every movie, every TV show, and every soap, like a love story based on “Romeo and Juliet” — but this had a lot of other ingredients.  It had drama, it had action, it has a police and crime element.  It had a lot of things and it was very well-written.  The story was great and that attracted me and I wanted to be a part of that.

It looks like you’ve been really busy working on the 112 episodes. How long did that take to film?
CRISTIAN:  It takes about 9 months to shoot a soap — a little over 9 months.  We’re not done yet and we’re still shooting. We hope to be done by the end of September.

That’s a remarkably fast pace, but there does seem to be a lot of story to get through.
CRISTIAN:  We have long hours and we shoot very quick, but we take our time when we need to take our time.  Like there’s some scenes that require more time and more dedication.  Then we take our time and we try to do our best.

Of all the action sequences, which one did you enjoy the most to work on?
CRISTIAN:  I don’t know the word in English, but it’s when you catch the little bulls in order to see how they are going to grow up.  So that and standing in front of a big bull.  That was pretty thrilling.

Did you know going into the series that you’d be working so closely to full sized bulls?
CRISTIAN:  No. I had no idea.  I remember when I was reading the scripts and I said, “Wait a minute.  What about this scene?” and they said, “You’ll probably have a stunt double and he’ll do everything.”  So then I said, “No, no, no.  I want to do this.”  So then I trained for a couple weeks with a friend of mine who is a bull-fighter and he trained me.  He was always by my side to make sure nothing happened.  But it is was great.  It was one of those experiences that is once in a lifetime.  You either do it or don’t do it; and I did it.  It was good.

Turning a little bit to the love story, what did you most appreciate about Daniel and Camila’s love story as it develops?
CRISTIAN: The love story between Daniel and Camila is also very unique ’cause when you see the first episode they both have other relationships. They don’t even know each other.  They have no idea that they are going to be together or that one day they will be together.  Then we see how destiny can change your life and destiny many times has a different plan for you than the one that you have in mind for you.  We think that our future is going to be one way and we have no idea that destiny has a couple of surprises in store.  So that changes their life.  In the case of Daniel, he left his country and he moved to another country and he had a whole life that he never imagined that he’d have.

Can you talk about the mystery surrounding Daniel?
CRISTIAN:  There’s not a big mystery about him ’cause in the first episode we gonna see everything revealed.  The only thing we don’t know and we don’t find out during the course of the story is why these very wealthy man who had this ranch in Mexico inherited it to Daniel.  That we will learn.  Was he really his son?  What was the reason behind it? And what is going to happen once Daniel takes possession of the ranch?

What was it like working with Silvia Navarro?
CRISTIAN: She is a great actress. Very talented and a very nice working partner.  We spent many hours working together and you really appreciate it when you have somebody working at your side that has the dedication, and is as professional as she is.  You really appreciate that.  It’s just nice to have somebody that is invested in the project and is also as talented as she is.

With such a large cast, did you get a chance to work with all the other cast on the series?
CRISTIAN: The good thing about my character is that he has a relationship with everybody.  I don’t think there is any character that I haven’t interacted with, which is great ’cause through that I got to meet great human beings and great professionals and many of them are my friends now.

Sounds like you had a great experience.  Will this telenova be continuing beyond the one series?
CRISTIAN:  No.  We wrap in about a month and half from now.  Univision is premiering the series this Monday, where it will air for about 6-7 months.  Then that’s the end of the story.

Do you know what your next project will be yet?
CRISTIAN:  Yes.  Resting and sleeping.  That’s what it will be called.  [Laughs]

Funny!  So what would like viewers to anticipate and look forward to about AMOR BRAVIO?
CRISTIAN:  I think they will have a blast.  The story is a journey and viewers should let the journey take them fun places. Thanks to the magic of TV. And at the end of the day, the beauty about the Spanish language is there is more than one way to say “I love you.”  I invite everybody to be with us Mondays through Fridays at 10:00 p.m. on Univision and have  a good time.

With that special invitation from Cristian de la Fuente, please be sure to check out AMOR BRAVIO which will be airing weeknights at 10PM on Univision.  Discover a love story that will make your heart swoon.