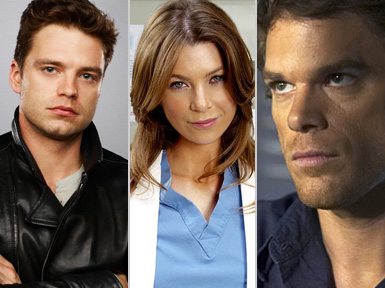 FALLING SKIES second season finale is this Sunday. Any idea how it ends? — Jason
The TV Addict: Boy do we ever! Unfortunately, to reveal the seriously cool scene on which the spectacular second season ends would probably not be in our best interest of a website proprietor who very much welcomes TNT’s penchant for dropping off screeners at our door! Thus, we’ll simply say this: Not only will FALLING SKIES cliffhanger of an ending leave fans bug-eyed by offering up a sequence of events that they’ve yet to see before, it sets up what sure as heck looks like a very interesting third season.

Despite the fact that the word “BlueBell” covers up far too much of Wilson Bethel for my liking, let me be the first to say how much I enjoyed your recent self-made promo for HART OF DIXIE. Now that you’re good and buttered up, how about a little scoop? — Skylar
The TV Addict: Would you believe that there is a serious downside to living in a small town like Bluebell? As luck would have it, everybody knows everybody’s business. Case in point, we have it on fairly good authority that one of Blue’s most notable bell’s recently spent an afternoon perusing the aisles of the local grocery store for household essentials. You know, stuff like potatoes, plums and PREGNANCY tests. Oops… we may have already said too much!

The only thing more exciting than the recent report that has John Barrowman jumping on board The CW’s ARROW would be if you could shed some light on the character he’s playing. Spill! — Jamie
The TV Addict: Since we don’t actually know who the artist formerly known as Captain Jack Harkness will be playing, we hope some irresponsible speculation will suffice. Speculation that involves a recent casting notice that found its way into our inbox for ARROW’s fifth episode of the season that has the production searching for a thirty to forty year old male named Edward who is described as the clean-shaven soldier and leader of a unit that captures Oliver. Think Christoph Waltz in Inglorious Basterds.

Is Sunday seriously the last episode of POLITICAL ANIMALS? — Frank
The TV Addict: While we’re not exactly sure if USA Network plans on renewing the critically acclaimed albeit ratings anemic series, having already had the pleasure of screening the episode in question, two things remain abundantly clear. One, It’s certainly the last episode for one character, whose untimely and shocking end will have some serious repercussions for the political future of the Hammond family. And two, thanks to an ending that leaves far too many things up in the air, creator Greg Berlanti sure as heck wasn’t writing this as if it was a limited six episode event. Note to USA Network: Give Greg a Chance!

Any BIG BANG THEORY news to brighten up my day following yesterday’s disturbing real-life car crash that thankfully didn’t result in too much harm to star Mayim Bialik? — Rachel
The TV Addict: If laughter really is the best medicine, you may enjoy learning that Sheldon’s ego is about to get that much bigger, as producers begin the search for an actress to play his new assistant. An assistant that will immediately hit it off with Leonard once the twosome realize how much of their life is dictated by the rules and whims of a certain STAR TREK obsessed scientist.

Seeing as though NIKITA shoots in your hometown of Toronto I’m wondering if you happened to have found yourself on the set at anytime this season? — Samantha
The TV Addict: Not so fun fact: Despite our best efforts to “accidentally” bump into noted animal activist and NIKITA star Maggie Q so that she can fall head over heels in love with Mac, our dream has not yet come to fruition. And believe you me, we’ve tried! That said, in Ms. Q’s defence, it would appear that she will have her hands full this season thanks to newly independent Amanda’s dream of recruiting members to her upstart organization. Promises Amanda in her sales pitch to “Anne,” who producers are currently casting for, “Division is going to self-destruct and we’ll be the ones to push the button.” Duh… duh… duh.

Your just released spoilerific trailer for DEXTER season seven has me more excited than ever. Care to add to that excitement? — Aaron
The TV Addict: The only thing we’re really prepared to spoil about DEXTER’s seventh season premiere that — in case you haven’t heard, is a return to form for the series — is that Dexter Morgan is in over is head. So just how much trouble is our intrepid anti-hero in? Put it this way: The opening sequence of the seventh season premiere involves him rushing to the airport! Read into that what you will.

I’m somewhat concerned about how Julia and Joel’s marriage will be affected by their recent addition of Victor to the family. Any chance you can alleviate this PARENTHOOD fan’s fears? — Jen
The TV Addict: In terms of Julia and Joel’s relationship, we’ve got a bit of a good and bad news situation for you. On the positive side, all signs indicate that the addition of Victor will not take a toll on their relationship. Where the bad news comes in is that it might very well adversely affect Julia’s career, specifically her partner track at her law firm.

Even though SHAMELESS’ third season is oh so far away, I’d love to get an update on my favorite television family. — Lee
The TV Addict: Happy to oblige, assuming of course you don’t shoot the messenger. Which is our not so subtle way of saying, remember that surprisingly uplifting and happy note SHAMELESS ended its second season on? Well, you’re probably going to want to savor that sequence, because when the hit Showtime series does return for its third season in January, things are going to get ugly. Specifically between daughter Fiona and absentee-father Frank, who appear poised to end up in a custody battle over who has guardianship over the Gallagher brood. Translation: Let’s get ready to rumble…