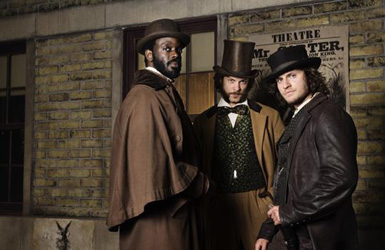 Taking a leap of faith on a new television series is not easy to do, but I am asking you to do it anyway.  Having had the opportunity to preview the first couple of episodes of the new drama series COPPER, I have compiled a few reasons that you should take the time and watch this fine new series from BBC America.

Rugged Heroes
It may be hard to see it from the promo photos or even the previews, but the men of this series are tremendously good-looking.  But better than their comely looks, they are heroes worth rooting for; for they champion those that cannot stand up for themselves and defiantly protect the honor of women and the safety of children.  Starring Tom Weston-Jones, along with Kevin Ryan, Kyle Schmid, Ato Essandoh, they portray the last line of defense against a criminal lawlessness that ruled the early days of New York in 1864.

Tom Weston-Jones plays Detective Corcoran, a man who served valiantly in the Civil War only to find up on his return that his wife was missing and his daughter murdered.  Uncertain whether his wife left voluntarily and what exactly happened leading to the death of his 7-year old daughter, Corcoran is haunted and driven to pursue injustice to the ends of the earth.   His partner, Detective Francis Maguire (Kevin Ryan) shares Corcoran’s passion in protecting the innocent and stands by Corcoran’s side through the murky and treacherous politics of working for the New York Police Department.  Fleshing out their unusual team of comrades are a savvy politician Robert Morehouse (Kyle Schmid), whose wealth and position shields Corcoran when needed; and Doctor Matthew Freeman (Ato Essandoh), a black physician who aids Corcoran as much he can with medical aid and forensics to help solve the increasingly tricky cases.

The bond between these men and Corcoran has been forged both in the battleground and in the streets of New York. They have each other’s backs and rise to defense the helpless in a time when heroes were desperately needed.

Clever Schemes
The show may appear to be another tale of good versus evil as Corcoran and his friends attempt to solve crimes, chase down criminals, and keep off the radar of those who would shackle them under tyranny; but crime and politics go hand in hand.  Where there is one, there is always the other.  What COPPER does so well is that it deftly weaves in threads of ongoing stories of political intrigue and the mystery of what happened to Corcoran’s family throughout each episode.

In addition, for each crime, there is a unique perspective on how to go about solving it.  Corcoran does not just rely in a gun and brute force to get the answers he needs or to punish the guilty, he relies on science and intellect to secure information he needs to establish his case.  Employing a bit of Sherlockian-finesse, criminals are ferreted out — and the justice sought is deliciously served.

Heart Tugging
Any good tale remembers that it is not just about what happens with our heroes, but that we need to care about them along the way.  We cannot just weep for the detective who lost his family, but we must appreciate how he treats his fellow man in the midst of his grief.  Corcoran and his friends not only share a strong brotherhood with each other, they take the time to extend their cocoon of love and friendship to those they meet along the way.  From the wayward waif to the lost prostitute to the man condemned to die, they extend their sympathy, compassion and tenacity in aiding them all.

Visually Intriguing
From the outset, the show appears to showcase the dark, dank alleys of New York at a time when there was not much to brighten each day.  But as the stories venture into the hallowed marble halls of the rich, the crimson rooms of wantonness, and to the lush outskirts of the city, we begin to see that COPPER is not tied to one locale on its canvas.  It will explore all the rich multitude of venues throughout New York and beyond – and each will be more visually arresting that the last.

Cheerworthy
When all is said and done, we want to cheer for our heroes.  We want to know that they will prevail over evil and that evil will get its comeuppance.  COPPER may fool you into thinking that justice remains elusive, but do not be fooled.  By the end of its 2nd episode, you will see exactly how justice is served in this unexpected series — and you will cheer.

To see exactly how engaging and addictive this new drama series is, be sure to tune in for the premiere on Sunday, August 19th at 10PM on BBC America (Sunday August 26th on Showcase in Canada)