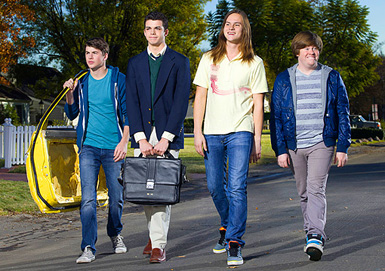 Seeking to emulate the success of the British television series of the same name, MTV’s new comedy series THE INBETWEENERS introduces us to a quartet of young men struggling to navigate the trials of high school.  For everyone who survived high school, one recalls acutely how thorny, and at times hilarious, the social structure is for those four pivotal years.

In this ribald and rambunctious series, Will McKenzie (Joey Pollari) dares to make the move from private school to public school only to find that making new friends is trickier than he imagined.  Quickly taken underwing by a well-meaning trio, Will discovers his new friends are perhaps not the most socially-polished, but they have good intentions and soon Will’s world becomes the epicenter of the wacky adventures of Simon, Jay and Neil, along with the girl who has caught their eye, Carli.

At a special screening event at the Paley Center in Beverly Hills, co-stars Joey Pollari, Bubba Lewis and Zack Pearlman took a few minutes to talk about their characters and what they appreciate most about their new series:

At its best high school is the best of times; at its worst it is a series of misadventures.  In the world of THE INBETWEENERS, life falls somewhere in between. To see how Will, Simon, Jay, Neil and Carli succeed in their adventures, be sure to watch the premiere of THE INBETWEENERS on Monday, August 20th at 10:30PM on MTV.