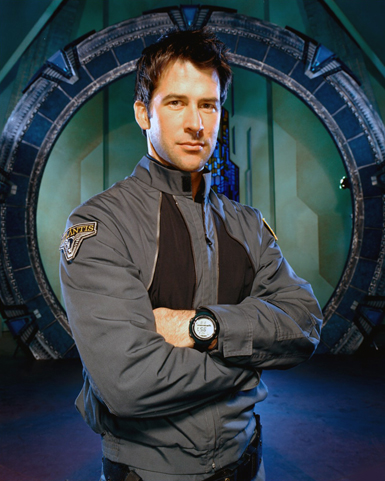 This is your first visit to Fan Expo Canada. What are you most looking forward to?
Joe Flanigan: I always like making contact with the fan base. I feel really lucky to have a following and it gives us a chance to express our gratitude. Also, I always look forward to the endless stream of strange outfits people wear.

What is the strangest thing that somebody has asked you to sign at a convention?
Well, its not the disturbingly large posters, or occasional breast, or even the elaborately painted oil portraits of myself. I would say it was someone asking me to autograph a picture of David Hasselhoff with no shirt on. I’m still trying to block that visual.

You ski, surf and play tennis (just to name a few). Were action scenes on STARGATE ATLANTIS easy for you to do?
They were generally easy for me. However, at the beginning of the show the stunt coordinator wanted to make my character some JuJitsu Karate maniac. Working a 14-16 hour day then rehearsing elaborate fight scenes proved difficult. I emphasized that my character was an improviser and basically a gunslinging space cowboy. Give the sticks and Karate moves to other people and just hand me the big gun. I think it worked for the best.

Did you take anything from the set when the show ended?
Yes, The People’s Choice Award statue that was oddly put on the producers shelf and never given to the cast even though it was awarded to the cast. It still sits in my living room next to my action figure.

Would you want to be friends with John Sheppard in real life?
How do I answer that question without being really self-congratulatory?

You are an accomplished actor. What is your favourite type of role to play and why?
I love action and I love playing characters who really aren’t sure they are going to survive. I also really like comedy. Without a doubt, though, John Sheppard was my favourite role. I would love to have played Indiana Jones and I am also hoping to get a crack at the Nathan Drake role for (the action-adventure video game), Uncharted.

There has been much talk about a SGA movie. Are there any updates that you can give us?
No plans on the books yet.

You co-star with Jean-Claude Van Damme in the upcoming DVD release, 6 Bullets. What was it like playing opposite the Muscles from Brussels?
I really enjoyed working with him and doing a more orthodox action movie than I am used to. My role was great and I’m hoping people enjoy it as much as I enjoyed shooting it.

About the Author: Terri-Lynne Waldron has been covering entertainment journalism for over 20 years and you can follow her on Twitter at @tw1976.