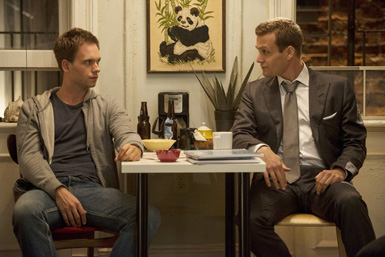 Bringing a sensational close to an outstanding season, the USA Network drama series SUITS ends its second season on a high note.  That is not to say that Harvey and Jessica will successfully manage to oust the thorn in their side and vanquish Daniel Hardman; but SUITS definitely has a clever trick or two up its sleeve to keep its fans guessing and salivating for more until the show returns.

The first season may have been introduced Mike Ross and humorously portrayed his acclimation into the Pearson Hardman world, as well as gaining his footing as a newly fledged associate at one of New York’s most preeminent law firms.  However, the second season showcased Harvey Specter, the man who took a chance on a young genius without a law degree.  Initially, it was just supposed to be a cool game for both Mike and Harvey when they rolled the dice last season to see if they could pull off such a masterful con as to pass Mike off as a Harvard Law School graduate and licensed attorney.  But this season, that all changed though as the stakes became infinitely higher.

Blowing the doors right off Mike and Harvey’s little secret, managing partner Jessica Pearson caught them both red-handed.  Yet with her name and the firm’s reputation at stake, Jessica begrudgingly permitted Mike to stay – albeit on a very short leash.  Thus, this season’s overall story arc should have been about Mike and his efforts to keep Jessica happy and appeased.  Instead, the show threw a curveball and just as Jessica was trying to assimilate the news about Mike and how to best manage damage-control, two much more serious problems arose: the simultaneous return of ex-managing partner Daniel Hardman, banished 5 years earlier after caught fleecing the firm’s client’s trust accounts and Harvey’s nemesis Travis Tanner who had found evidence that Harvey had knowingly committed fraud and withheld critical evidence in a defective automobile case years before.

Caught in the cross-fire of both an internal political disaster and a looming sense of doom with the return of nefarious Daniel Hardman and Travis Tanner’s frothing desire to make Harvey sweat blood and be disbarred for professional misconduct, the Mike-Harvey shenanigans seemed to pale in comparison.  Things got steadily worse as Donna risked her career by shredding a vital document that may have exonerated Harvey; and Harvey, sensing Mike could not successfully keep up his end of the charade, squashed the blossoming Mike and Rachel romance.  Adding further fuel to the raging fire of calamities, in last week’s heart-wrecking episode, Mike’s beloved grandmother died.

Talk about building up to a climatic season finale!  To recount briefly where things stand: Mike is sidelined in his grief and anguish over his loss; Harvey failed to win Louis’ pivotal vote in the upcoming partnership meeting; and Jessica is facing losing everything she has fought so tenaciously to preserve. With our “suits” so distracted and distraught, they failed to anticipate exactly how much of a threat Daniel Hardman is to all of them.  It is painful to reveal, but things go from bad to worse in the finale.  The game they have strived to win hangs in the balance and their key player has just struck out – leaving Louis Litt as the one person who can keep Hardman from exacting his revenge.  Unfortunately as history has proven, Louis does not always make the wisest of choices;  Louis’ self-interest makes him a survivor, not a hero.

SUITS has deftly ensnared us in its ever-addictive world of legal maneuvering.  It has shown that cases are not won in a courtroom, but rather sometimes in a conference room or a boardroom.  The powerplays that really matter are made behind closed doors and with back-room handshakes, which Harvey and Jessica know better than anyone. They know the clock is ticking on the Hardman timebomb – and time has just run out.

To see how much damage is inflicted when the explosion occurs, do not miss one second of the upcoming 2nd season finale of SUITS as it airs Thursday, August 23rd at 10PM on USA Network (Mondays at 9PM on Bravo in Canada).  Bring a flak jacket!