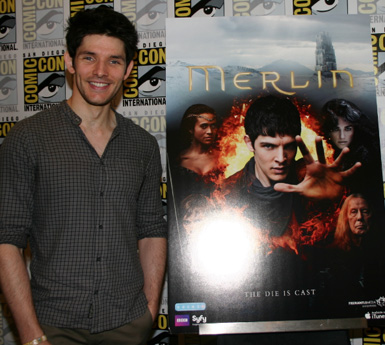 The British fantasy series about the classic tale of Arthur, Merlin, and the Knights of the Round Table has made hearts swoon and captured the imaginations of fans across the globe.  MERLIN returns for its fifth season on September 29th across the Pond in the U.K. – and will hopefully air early next winter in the States.  However, some of the juicy scoop and spoilers shared at last month’s Comic-Con event in San Diego were too good to keep to ourselves.  Accordingly, here are some of the highlights that fans can anticipate from MERLIN’s upcoming 5th season.

Time Jump
Executive producer Johnny Capps revealed that Season 5 opens three years after the events of the 4th season finale, which featured the long-awaited wedding of Arthur and Guinevere.  He also explained that Season 5 will be a little bit more darker and sophisticated as they move towards the more classic Arthurian legend, where the stories were naturally more dark.  Star Colin Morgan (who plays Merlin) described the 5th season as, “It’s definitely the most ambitious season yet,” and his co-star Angel Coulby (who plays Guinevere) added, “Season 5 is more psychologically dark, but will be still accessible to our younger fans.”

What’s Next for Merlin
Colin Morgan explained that during the course of Season 4, Merlin crossed over a bit into the darker side and that is something explored further throughout the 5th season.  Colin then hinted that fans should anticipate a very important scene in terms of Merlin’s magic that will be upcoming this next season, which taps into Merlin’s emotions and the darkness he touched. He also acknowledged that there will be a lot of forces coming at Merlin and he will have to fight back even more against them.  He also admitted that previously Merlin had been perhaps too confident in his abilities and too hasty in exposing himself; thus, in this next season it will be important for Merlin to start keeping things to himself, for Merlin cannot be as careless and has to be more guarded.  He added  that Merlin will have to adapt and be more calculating in planning things as Arthur confronts his own views on magic, which could change everything for Merlin – and not for the better.  As for Merlin and Arthur’s friendship, Colin noted that Merlin and Arthur’s relationship is strained a bit this season because Arthur is now king; but at same time Arthur and Merlin’s relationship has matured.  This may also be the toughest year for Merlin as he finds himself even more isolated from those he cares about.  Especially in light of Aithusa’s betrayal in rescuing Morgana; for as the Dragonlord, Merlin felt the dragons were like kin.  The fact that the baby dragon aligned with Morgana hurt him deeply.  So without Arthur or Gwen or even the dragons, Merlin feels even more cut off.  In fact Colin noted, “There’s a lot of loneliness in Merlin.”

What’s Next for Gwen
As the Queen of Camelot, Angel Coulby revealed that while Gwen believes in herself more now, Morgana is a constant worry and threat.  Fortunately tempering that constant fear is the strong partnership between Gwen and Arthur; as Gwen is truly his equal now as Arthur confides in her and trusts her completely – and best of all, they love each other deeply.

Even co-star Colin Morgan observed that Gwen has come into her own as a ruler and does not hesitate to call Arthur on his “glory seeking” behavior.  Arthur cannot just ride out to defend his kingdom from the slightest threat anymore, he must act like a ruler and rule from his throne.  So this allows for the Knights of the Round Table to step up and take on a more active role, permitting Merlin lead them from time to time.  Though Angel was quick to note that Merlin still has Arthur’s back and keeps watch over him.  Thus, when Gwen is holding down the homefront on the throne of Camelot, Merlin is watching over Arthur.  Angel would love to see more Gwen and Merlin adventures, but hinted that as Arthur has Merlin, now there may be someone who keeps watch over Gwen — she has a champion of her own, so to speak.  Angel also teasingly advised that there is a very interesting twist in middle of Season 5 for Gwen.

What’s Next for Morgana
While peace and happiness have reigned in Camelot for the past 3 years, things have not been so rosy for Morgana.  Colin cryptically described it as, “In the 3 years that have passed, something has happened to Morgana.”   Fortunately Katie McGrath was much more open about what is going on with the terrible fate of Morgana.  She explained, “Three years have passed, and things have gotten even worse for Morgana – especially since she has lost both Morgause and Agravaine – and her worst fear has come true.  She has been actively persecuted for having magic.  Thus, she feels vindicated in her battle against Camelot.  It’s very personal for her and she feels Arthur and everything he stands for is out to get her.  So it’s not about getting the crown anymore; it’s about being accepted.”  Katie also noted, “MERLIN is good about balance:  everyone has a dark side and a light side.”  Yet for all her hideous crimes, it is not always easy to see Morgana’s side or to forgive her for all that she has done.  Katie explained it as, “Morgana’s journey went from semi-spoiled princess to all powerful being.  So Morgana doesn’t understand what she’s done to everyone else.  She’s too self-absorbed.  She eventually needs to realize what she’s put everyone else through and take a good look at her own actions.” Colin teasingly added,  “Gwen and Morgana have an upcoming tense scene.”  But then he also ruefully noted, “There’s also a confrontation between Merlin and Uther coming.”  Laughingly, Katie refused to answer whether Morgana has something to do with return of Uthur.  She also dodged the question of:  how is it possible for Morgana to have been incarcerated for three years when she is so powerful?

Return of Uther
One of the most anticipate moments of the season will be the return of Uther.  Executive producer Johnny Capps explained that while they adore having Tony Head back, Uther only returns for one episode.  He elaborated by explaining, “Uther returns in a very unexpected way.  He returns at a point in Arthur’s life where he’s absolutely missing his father — at a moment when Arthur is having a wobble as king and needs some advice – and at a moment of weakness is some how able to contact Uther.”  The story unfolds in an unexpected way with lots of twists and turns.  He also revealed that Uther also has amazing scene with Merlin and they have a good conversation that they should have had a long time ago about Arthur.

Rise of Mordred
We all knew years ago that the day Merlin saved the young boy Mordred that he may one day regret it.  Executive producer Johnny Capps foreshadowed, “It’s the golden age of Camelot with the Knights of Round Table – in fact season five opens with scene at the Round Table — and  Morgana is in need of a right-hand man.  So Mordred returns just when she needs some support.  In addition, Mordred knows key things about Merlin, which he may or may not share with Morgana.  So Mordred comes in and stirs things up.  It refreshes the series.  Mordred is a complex character and villain, so he goes on an interesting journey.”  Even star Colin Morgan acknowledged, “Mordred is the big force this year.” But Katie McGrath was a bit more coy saying, “There is a relationship of a kind with Mordred and Morgana,” but would not exactly what kind of relationship – whether it be romantic, motherly or out of common goals.  (Mordred will be portrayed by newcomer Alexander Vlahos.)

Fun Guest Stars
As for what fresh and returning faces to expect in the 5th Season, executive producer Johnny Capps stated that Liam Cunningham will be featured in the first and second episodes of Season 5, who he felt brought a natural gravitas to role.  He also revealed that John Bradley from GAME OF THRONES makes an appearance and that Janet Montgomery would be returning as Princess Mithian.

Season 6 and Movie Trilogy
The final big reveal that executive producer Johnny Capps shared was that they were in discussions with the BBC for a 6th season of MERLIN and that they were negotiating for a trilogy of MERLIN movies that would go back to the earlier part of the series to fill-in pieces of the existing MERLIN story. When asked if he was up for perhaps 6 more years to complete the 6th season and the upcoming trilogy for MERLIN, star Colin Morgan laughingly said, “Only if the passion is there in the story.” 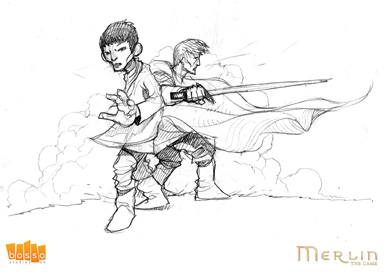 MERLIN the Game
Fans looking to extend the MERLIN experience are invited to check out the new online game offered by Bossa Studios on Facebook last this Fall.  “Merlin The Game” seeks to enrich the fan experience by taking them into a virtual world where they can join on the Knights of the Roundtable’s quests fighting the good fight against evil.  As explained by Imre Jerle (creator in chief at Bossa Studios), “We have carefully crafted the game to capture the very essence of the worlds most famous sorcerer.  Players can explore magical lands while adventuring alongside trusty allies in the Crystal Cave, knocking out ferocious Wilddeoren rats or uniting with one of their favorite characters, like Merlin or Arthur.” Creators and executive producers Julian Murphy and Johnny Capps also explained, “Each step allows the player to become more immersed into a wider universe of Camelot. We are amazed at the attention to detail.  Fans of the show are sure to love the opportunity to create and follow their own destinies.”

For the ambitious fan, there is an exclusive sign up registration to be the first to play the beta version of the game currently available at: www.merlingame.com. A special behind-the-scenes video can be seen on the Merlin YouTube page.

MERLIN, whether experienced as a television show or online in video game form, is a world unto itself.  The legend of Merlin, Arthur, Guinevere, Morgana and Camelot has existed for generations and manages to captivate us time and time again.  For those who have discovered the magic of MERLIN, Season 5 returns Saturday, September 29th in the U.K.  — and those of us States-side will have to wait patiently a few more months, and as the Season 5 tagline foreshadows, “The die is cast.”

If you have not had a chance to view these fun video interview with Colin Morgan and Angel Coulby, be sure to check it out: