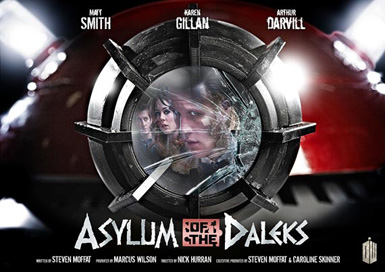 No matter how dire the promos looked with The Doctor carrying Amy’s seeming lifeless body in his arms, we just knew that Amy’s journey was far from over; for she was destined to meet with the Weeping Angels one last time – and thus her time as The Doctor’s companion had not come to an end just yet. But we still all clutched our hearts and held our breath all the same.

In a fun and somewhat amusing twist in “Asylum of the Daleks,” The Doctor, Amy and Rory were abducted not so that the Daleks could kill their mortal enemy and his beloved companions; instead, the Daleks wanted The Doctor to save them and had simply provided him with Amy and Rory because they understood that he required companionship to accomplish his missions. Surrounded by the one alien species that he and his fellow Time Lords had worked tirelessly to eradicate, The Doctor was only too happy to preserve his own life by taking on the task that the Daleks were too afraid to tackle themselves – destroying the Daleks deemed too unfit and insane to live amongst their own kind, which had been abandoned on a planet and left to die.

With fearless confidence, our trio of heroes strapped on their handy nano-field wristbands that were supposed to protect them from the toxic planet infected with nanogenes, which could transform any living being into a Dalek. Thus, it was with hearty enthusiasm, which soon turned into bravery balanced with shades of terror and worry that Amy and Rory joined The Doctor in this latest adventure. But for Amy and Rory, this was to be their last hurrah. They had already decided long-before that their marriage was over and this was the perfect chance to have one last trip with The Doctor and to break the bad news.

Yet, as always, fate had other plans. Reluctantly recruited and yet happy to help, the Ponds were at a crossroads. Both seemed deeply saddened at their future alone and yet were standing by their decision to end the marriage. It was only in fighting the Dalek nanogenes, and clinging to her love of Rory was the Ponds marriage ultimately saved. Amy could no longer deny her love for Rory, and revealed that she had only wanted to release him from his marriage vows because she thought it was unfair to condemn him to a life where she would not be able to bear him children (or rather, more children, River Song was but their daughter for just a moment before she disappeared and reappeared later in their lives). But for Rory, the fact that Amy was no longer able to grant him children was a non-issue. He loved her heart, body and soul regardless. She was “the girl who waited” and he was “the boy who waited.” Their romance was written in the stars and nothing was going to keep them apart.

However, this was but one part of the story. “Asylum of the Daleks” was also the story of Oswin Oswald, a vivacious young woman trapped amongst the insane Daleks looking for a way to escape the asylum. Yet for all her cool computer skills and the ability to seemingly know everything, Oswin’s tale was a tragedy. She had saved our heroes, but they were unable to save her. It had been a cruel and horrifying revelation to learn that the spunky young girl was no longer as human as she thought. The minute her spaceship crash-landed on the planet, and without the life-saving nano-field wristband to protect her from the nanogenes, Oswin had been transformed into a Dalek before she could even realize what had happened. She had been going through her daily routines of baking soufflés and hiding out in her sanctuary for nearly a year unable to comprehend and accept her altered reality and the fact that her humanity had been stolen from her long ago.

This was the twist and the tragedy of “Asylum of the Daleks.” We may have laughed at the Daleks as they pled with The Doctor to “save us” from the insane Daleks stuck on the planet below and called him “The Predator,” and we were even more amused when they renamed him “Doctor Who” in the end because Oswin had erased him from the Daleks’ collective memory bank; but there was a feeling of haunting sadness in the end. Oswin had saved The Doctor and all she asked in return was that he remember her as human. It seemed so little for the young woman who had saved his life. The one nagging thought is that somehow, some way, The Doctor must find a way to repay this debt. Surely remembering Oswin’s bravery and humanity is not enough.

For those of us keep abreast of the casting news that Jenna-Louise Coleman is has already been chosen as The Doctor’s next companion as the Ponds’ journey with him comes to an end, we know that Oswin shall live – in one form or another. In fact, her name is to be Clara Oswald, not Oswin. So if the Dalek version of Oswin perished when the asylum was blown to smithereens the second that the force field was down, where does Clara come from? Is she a prior ancestor to Oswin or Oswin herself? Alas, the answers to these mind-boggling questions may not be satisfied until Christmas when The Doctor’s adventures with his newest companion finally begin.

In the meantime, we look forward to Amy, Rory and The Doctor’s next adventure in “Dinosaurs on a Spaceship.” As crazy as that sounds, we have all seen much more astounding things over the course of the five decades of The Doctor’s travels.

DOCTOR WHO always manages to weave humor and poignancy into its wondrous tales of adventure across time and space, but it also serves as a check on our own humanity. What price is too great to pay in order to preserve those we know and love? Shall The Doctor be cursed to save millions upon millions of human lives at the sacrifice of the few? And are the chose few to be his companions, marking them for death the minute they agree to step beyond those blue doors of the TARDIS? Heaven forbid, as the countdown clock continues ticking down on the Ponds time aboard the blue box bigger on the inside than the outside. We are desperately clinging to the hope that there is a happily-ever-after in store for Amy and Rory and we want to see them get it. Now on with the dinosaurs! We have been hearing a tale or two about those already.

On this side of the pond, DOCTOR WHO airs Saturday nights at 9PM on BBC America (Space in Canada). Catch you on the flipside as we all track our own blue boxes into the blogosphere and our dreams.