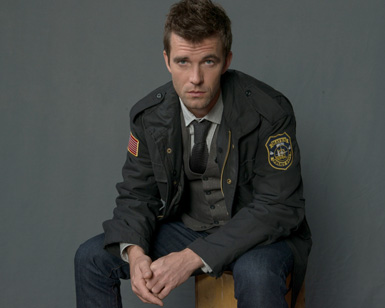 As fans of the Syfy series HAVEN are well aware, the show’s hero Nathan Wuornos (portrayed by Lucas Bryant) is cursed with an affliction (or “trouble” as such things are known in Haven) that prevents him from physically feeling anything.  It was thus with unexpected surprise and joy that Nathan accidentally discovered that for whatever reason he could feel the touch of Audrey Parker (Emily Rose), a newcomer to Haven. It was a secret that Nathan concealed for the better part of the first season of HAVEN and one which, after known, created a tantalizing prospect of a romance between Nathan and Audrey in the second season. But just as they were about to step in that direction, the second season finale snatched that possibility away with Audrey’s untimely kidnapping.  The “troubles” of Haven had struck again and this time it was straight through the heart.  In a recent exclusive sit-down interview, star Lucas Bryant provided insight as to how the third season of HAVEN will offer further roadblocks in the romance between Nathan and Audrey and what role the new characters have to play in their increasingly complicated lives.

As can been seen, Lucas is quite confident that HAVEN’s third season is going to kick-ass.  He feels that the additions of new cast members Dorian Missick, Bree Williamson and Kate Kelton bring a special new dynamic to the show — offering a prism in which to look through and assess how messed up things really are in Haven.  For as season three will show, life amongst the “troubled” has not gotten any easier, and in fact, things are beginning to spiral out of control.  There also is a murky faction known as The Guard who are seeking to recruit the “troubled” and their motives are not yet known.  Thus, season three of HAVEN is all about the growing influence of The Guard and the story behind the person known only as The Colorado Kid, who died that fateful day 27 years ago.  Using the aid of a big city detective new in town, a local therapist and a waitress who may be the key to unlocking the agenda of The Guard, Nathan and Audrey’s quest to subdue the “troubles” and restore peace to Haven will be a challenge — and just when you think you have all the answers, an even bigger question arises.

But the good news is that Lucas promises that there will be huge reveals and lots of answers before the end of this season.  As for that tattoo on Nathan’s arm, the answer to how and why it appeared in the second season finale will be addressed right away in the first returning episode.  Interestingly enough, that tattoo shall prove instrumental throughout the upcoming season as it offers an invitation to discover what it means and why certain people have it.

However, as for heeding his father’s dire warning that Audrey is too important and that Nathan should not get involved with her, Lucas reassures fans that Nathan remains undeterred when it comes to his feelings for Audrey.  It is not enough that Nathan can actually feel her, but also Audrey has been the one person consistently there for Nathan as he dealt with the loss of his father and took over the reigns of the thorny political position of police chief.  Audrey’s loyalty, support and love only strengthens Nathan’s resolve to keep her in his life.  But when another young woman catches Nathan’s eye, there could be a pull on Nathan’s affections as he reevaluates why he is drawn to each. Yet, as Lucas readily admits, Nathan cannot seem to help himself when it comes to Audrey.

Lucas also shared that funnily enough in the real world, there are challenges in filming the Nathan/Audrey scenes as he and Emily try to  remember to not touch each other, which leads to some carefully choreographed scenes to ensure proper contact is made and does not prove a distraction.

Despite Nathan’s tug-of-war over his emotions between Audrey and Jordan (Kate Kelton) this season, the one thing Nathan is much more decisive about is how to deal with the “troubled.”  No longer constrained by moral dilemmas, Nathan unflinchingly acts to remove any threat to the people of Haven.  This is in stark contrast to fellow Haven-ite Duke Crocker (Eric Balfour), who now that he has found out that it is his family’s legacy to act as a “reaper” of the “troubled,” finds himself much more conflicted and uncertain about his role in helping or eliminating the “troubled.”  With the recent discovery that he himself is now “troubled,” it puts Duke in the cross-hairs of fate.  He can no longer sit back and watch the rest of Haven struggle with the “troubled” problems, he is in the thick of it and everyone is looking to see which side he lands on.  Will Duke pick up his father’s work and save the “troubled” by killing them? Or will Duke resist his legacy and struggle to find his own path? So Nathan and Duke may be at odds this season on the best course of action to handle Haven’s battle with the “troubles.” 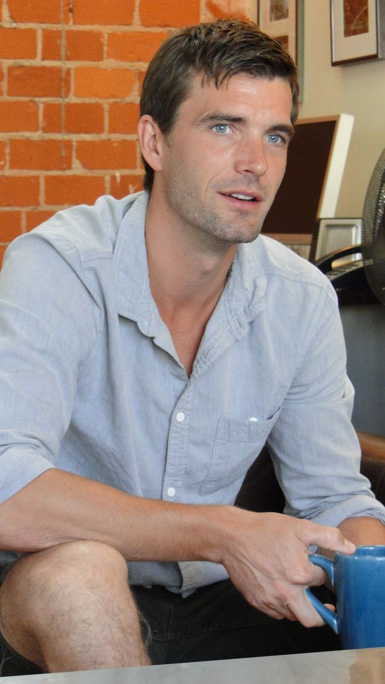 Back in the real world, there are no such conflicts between co-stars Lucas Bryant and Eric Balfour who remain steadfast friends and who continue to tease each other mercilessly at every possible opportunity.  One only has to see the two of them together to witness their warm camaraderie and it seems to have infected the rest of the cast as well as they all had such wonderful things to say about each other.  Lucas shared that he could not love Eric more as it is a pleasure and joy to do scenes with him.  He was just as effusive about co-star Adam Copeland, who he described as a fantastic actor who impressed him this season.  Then Lucas impishly added that because Adam and Eric are so magnetic that he finds himself drawn to them and cannot hold himself back when he is around them.  Given the twinkle in his eye as he said it, you can interpret that as you wish.

Finally, the one big teaser Lucas had to offer is to keep an on eye on the fate of The Colorado Kid.  There is a lot more going on with that story that will make up a big part of this season’s overarching mystery and he hopes that the fans and new viewers will be as excited about this season as he is.

To see the fate of our heroes after last season’s massive cliffhanger which left Duke and Nathan squaring off and Audrey missing, be sure to tune in for the 3rd season premiere of HAVEN on Friday, September 21st at 10PM on Syfy (Friday September 28th at 9PM on Showcase in Canada).  Everyone’s troubles have just begun!