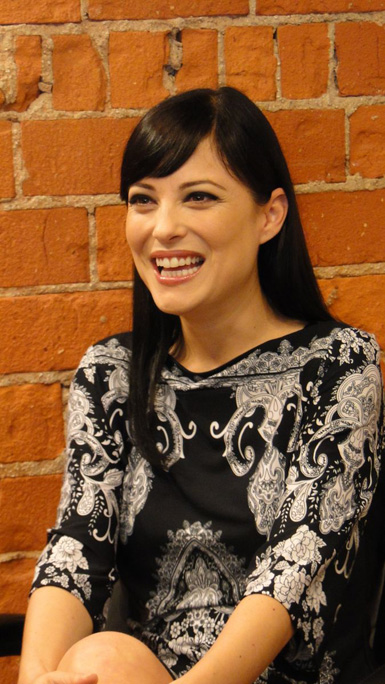 Portraying the most controversial of the new characters introduced in HAVEN this season, Kate Kelton is the woman to keep a close eye on.  Her character Jordan McKee maybe a waitress at Haven’s Gun & Rose café, but as fans who have been following the digital media campaign on Twitter are well aware, Jordan is also the face of the mysterious organization known as The Guard.  Actively recruiting the “troubled” from the four corners to “Escape to Haven” (#EscapeToHaven on Twitter), Jordan appears to be the benign face of a group of people offering sanctuary and a safe haven for those who feel persecuted, excluded and simply afraid of how their abilities set them apart in a world where “special” is interpreted as “strange” and something to be feared.

But like everything else in HAVEN, nothing is exactly what it appears on the surface.  Jordan McKee is not as benign as she looks and The Guard may not have the “troubled’s” best interests at heart.  In fact, fellow Haven-ite Dwight Hendrickson (Adam Copeland) has stepped forward with a video campaign of his own denouncing The Guard — though given that there is a history between Dwight and Jordan, there may be more than just an ideological difference of opinion going on.

As revealed in some of the season three previews, there is a brief clip showing a kiss between Jordan and Nathan.  (Gasp!)  Both Lucas Bryant and Kate Kelton were quick to point out that viewers cannot exactly tell what the circumstances were in that particular clip, so viewers should not start pulling out their pitchforks yet.  There may be a good reason for that infamous lip-lock moment.  One possibility is that Nathan is working undercover and trying to infiltrate The Guard; and what better way in than to romance one of their own?  Another possibility is posed by the circumstances of Jordan’s own “trouble” – unable to touch another human being out of fear of killing them, Nathan may be the only one who Jordan can safely touch.  That kiss could be an experiment, or a way of showing sympathy and understanding between two “troubled” people seeking a bit of solace — or our worst fears are realized and there is a new romance brewing between the two.  But as we have seen, the path of love is never easy in HAVEN.

In a recent exclusive interview, Kate Kelton talked about what ripples Jordan will cause this season in HAVEN:

Listening to Kate describe Jordan, we cannot help but wonder if Jordan is a character that we shall find ourselves falling in love with despite our better judgment as well.  And since she seems to have swept both Dwight and Nathan off their feet, we would be in fine company!

Jordan is a character full of passion and secrets, but that does not necessarily make her the enemy.  Like most of the “troubled,” Jordan is seeking a way to live, accepted for who she is, and to not have to live in fear for her life simply because she is different.  In her world, there may not be a good side or a bad side, it is only the side that lets her live in peace.

As a fan of the show herself, Kate was torn as to whether or not she was rooting for Jordan and Nathan because she too is a fan of the Nathan/Audrey relationship.  Though Kate is the first to admit that she did not mind at all having to do kissing scenes with co-start Lucas Bryant, nor when Adam Copeland filled in for Lucas.  In fact, Kate shared a funny story about how once she was running lines with Adam where he did a pitch-perfect impersonation of Lucas/Nathan – leading to speculation that perhaps we have discovered a hidden new ability or “trouble” for Dwight in a future season of HAVEN as a shape-shifter or mimic. (Fingers crossed that a 4th season comes to fruition as we’d love to see that!)

As for what to expect as the third season unravels, Kate forewarns that fans are going to lose their minds at how much goes down before the season finale.  The Jordan/Nathan reluctant romance will only be a portion of what they all go through as the murky motives of The Guard are exposed and the clock ticks down on Audrey’s fate.  Plus, the one question everyone should be asking is:  what will they all do once the “troubles” are gone?  Will Audrey vanish like she has time and time before?  Will any attraction between Nathan and Jordan dissipate because they would no longer be drawn to the one person who understands what they are going through?

On a lighter note, one fun thing that fans should look forward to is the upcoming Halloween episode, aka “the haunted house” episode directed by Jason Priestley.  Kate happily shared that working with Jason was unparalleled as his infectious spirit buoyed them all as they struggled through that tricky episode.

Finally, Kate recommends that fans jump in with both feet and hang on for the entire crazy ride of season three of HAVEN.  She also warns that there is a “whammy” of a surprise in the final episode, so be prepared.

To join in on the HAVEN fun, be sure to tune in for the Season 3 premiere on Friday, September 21st at 10PM on Syfy (Fridays at 9PM on Showcase in Canada) – and be prepared for Kate’s grand entrance as Jordan in the October 12th episode.  It’s going to be a shocker.