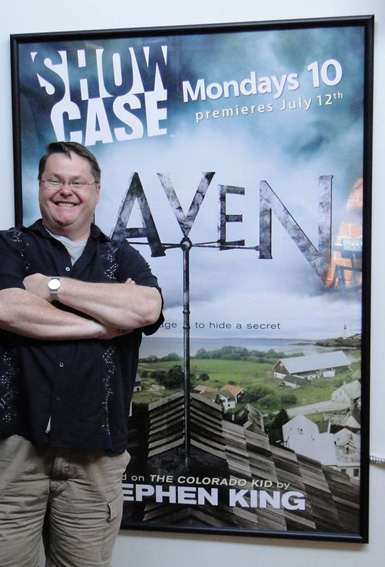 The third season of HAVEN is not just about bigger and better mysteries, it is a season that promises answers.  When co-creators and executive producers Sam Ernst and Jim Dunn first started the show, they wanted viewers to focus on the questions of:  What is going on with Audrey?  And where does it all lead?  And this is the season we get answers to those burning questions.  However, it should be cautioned that season three will also bring up new mysteries to be solved, one of which will lead to a cliffhanger that fans should be prepared for in the finale.  The one promise is, that no matter what questions arise or which mysteries are solved, fans will enjoy finding it all out.

In a recent exclusive interview, executive producer Jim Dunn provided a few hints and teasers about what Season 3 will offer and what is going on with the new characters that show up this season.

As Jim described, there are three new pivotal characters being introduced that fans should watch for, the first is Bree Williamson, who portrays Haven’s resident psychiatrist Dr. Claire Callahan and it’s Claire’s job to help the “troubled.”  Audrey may triage the “troubled” away from catastrophe, but it’s Claire who holds their hands through recovery, learning to cope and live with their abilities and the effects it has on their lives.  Then jumping right in to the fray of Haven’s “troubled” world is newcomer Dorian Missick portraying Detective Tommy Bowen, a big city detective acting who is a bit of a fish-out-of-water and is not sure what to make Haven’s unusual inhabitants.  Finally, the most conflicted character will be Kate Kelton’s tortured Jordan McKee, a woman’s whose affliction makes her feel both powerful and isolated at the same time.  Jordan is also caught up in the world of the mysterious organization known as The Guard, and her videos have been circulating on Twitter and Facebook inviting the “troubled” to seek refuge with The Guard in Haven.  But are their messages offering “Escape to Haven” really what The Guard is all about?

In addition to being face of The Guard, Jordan is also a possible new love interest for Nathan, perhaps because Jordan has a “trouble” of her own that is surprisingly complimentary to Nathan’s “trouble.” As Jim explained, this turns the tables on Nathan and puts him in the position that Audrey is to him.  Because Jordan cannot be touched without of fear of hurting someone, and only Nathan can touch her,  it puts them in a unique position and piques both their interests.

Also Nathan is a bit curious as to what is going on with The Guard, and since the tattoo on his arm does give Nathan suddenly a certain amount of credibility with The Guard, Nathan seizes that opportunity to delve into their underworld.  However, since Nathan is virtually the poster-child for the “troubled,” he cannot easily sneak in under The Guard’s radar, so getting closer to Jordan also provides a way into their secretive organization.

Another unexpected ally is Dwight, a disillusioned former member of The Guard.  Jim happily shared that writing for Adam Copeland, who plays Dwight, has been a pure joy.  Just peeling back the layers and discovering who Dwight is as a character has surprised them all.  It also doesn’t hurt that Adam’s presence on screen just seems to jump out, something that is not a surprise of longtime Edge fans who have faithfully followed Adam from WWE to HAVEN. So as the show continues explore Dwight’s backstory through the current online digital initiative that will lead to some interesting revelations about Dwight as well. Such as, why did Dwight leave The Guard?  And what exactly is the history between Dwight and Jordan?

Then, as we shall see, there is a distinct possibility that romance may be taking an interesting turn this season on HAVEN.  Will Nathan actually fall for Jordan, or will his feelings for Audrey prove too strong to ignore?  Fans are confident that what Nathan and Audrey share cannot be broken, for it is time tested and true.  But with a clock put on Audrey’s time in Haven, it could put strain on the newly blossoming romance.  Suddenly survival could take precedence and dating back-burnered — though we would all like to hope that those star-crossed lovebirds learn to seize the day!

Jim explained that the relationships of all the core characters are only going to deepen and become more complex this season because they wanted to explore who was with whom and why.  They also wanted to sharpen the focus of each character’s emotions and highlight the choices they make.  With Audrey’s allocated time in Haven is running out — for as the “troubles” go away, so will she, like she has time and time before when she lived previously in Haven as her previous incarnations Sarah and Audrey years ago — so with the clock ticking down, Audrey’s time is almost up.

Thus, what becomes essential is finding out what happened that fateful day 27 years ago – the day The Colorado Kid died.  It is a “lost day,” meaning that people do not seem to remember it clearly.  In fact, there are portions of time missing from everyone’s memories of that day.  Unfortunately, if Audrey is going to find a way to stay and not vanish again, she needs to unravel the mystery of what happened with The Colorado Kid and how she can prevent history from repeating itself.

Jim also added that because HAVEN is based on the Stephen King story of The Colorado Kid, they wanted to honor that story by finally delving into the mystery behind it.  Who was The Colorado Kid?  Who murdered him? And why was that date so significant?  It is a day commemorated by a newspaper clipping and photo that clearly shows Audrey as Lucy, yet after that she simply disappears.  Therefore, there is something very significant about that day and it is imperative that Audrey figures it out before it is too late.

Another person embarking on a dark journey this season is Duke.  After springing upon him the revelation of his family’s legacy, Duke finds himself very conflicted about his role in Haven.  He could always walk away before rationalizing that the “troubles” were not his problem; but now Duke finds himself at the epicenter of it all, and there seems to be a clock ticking down for him as well.  It appears that given their crossed fates that Duke and Audrey are destined to be on opposite sides of this murky mystery; yet their unknown past relationship bears scrutiny as well.  Audrey once knew Duke when he was a boy and gave him a necklace.  Just what was their relationship when Audrey used to be Lucy and how does that affect their relationship now?  That particular history is just simmering beneath the surface and is likely to explode in ways that neither can anticipate.

In fact, all three of our heroes: Audrey, Nathan and Duke, are wrestling with difficult issues this season.  Nathan must delve into The Guard and get a handle on coping with the “troubles.”  Audrey is racing against the clock to find a way to stay in Haven.  And Duke has to figure out if he will be a hero or the villain in this story.

As luck would have it, HAVEN is not going to make it easy for them or for us as viewers.  Jim cautions that the season three finale will about as big a cliffhanger as one can get in HAVEN, with the clock will tick right down to the stroke of midnight.  So you have been forewarned, this season of HAVEN will be very satisfying and very strange for viewers.   Mysteries will be solved, answers will be revealed, and yet there will be one final surprise to shock us all so that we will be eagerly awaiting a fourth season next year.

To see how this enigmatic season plays out, be sure to tune in for the 3rd season premiere on Friday, September 21st at 10PM on Syfy (Friday September 28th at 9PM on Showcase in Canada), and for the twelve Fridays thereafter.  If there is a clock ticking down on our heroes, we do not want to miss one second their final days. Tick, tick, tick . . .