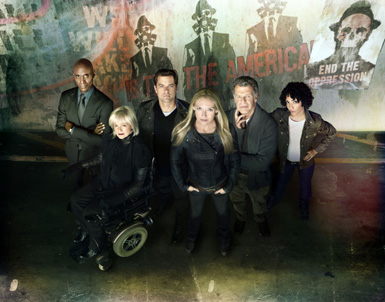 FRINGE has been an absolute miracle of a sci-fi show since its debut.  The fact that it lasted to its fifth season is also a testament to its loyal and tenacious fanbase that followed it from timeslot to timeslot and even to the dreaded Friday nights.  In fact, “Fringe Fridays” became a destination for fans every Friday night last year.  Thus, it is with joy and exuberance that FRINGE will be celebrating its final 13 episodes of its fifth season continuing the same tradition.

As the extraordinary journey of FRINGE and its Fringe Division heroes comes to an end, it is only fitting to reflect back on its achievements and to ponder where the journey has taken us. The following interviews with executive producer J.H. Wyman and some of the cast show their excitement over what is still yet to come and the joy over what they have achieved:

As Joel emphasized, this final season is designed to be a “love letter” to the fans.  He wanted to answer every possible remaining question he could, which he ruefully admitted was hard to do.  He also understood how hard it is going to be to say goodbye to these characters, adored by fans and those who have brought this show to life.  But all good things must come to an end, and so too does FRINGE.

With 13 final episodes to showcase and conclude this fine series, Joel felt that was enough to tell the story he has been dying to tell.  FRINGE has always been a remarkable series carefully constructed with each season’s theme mapped out and making sure that it paid off.  In addition, not only did the story arcs and themes have to work, there had to be emotional continuity.  Each character traveled a specific path that led them to a specific point; and that is something he intends to continue through this final season.  Thus, for season five, Walter, Peter and Olivia all must endure a final odyssey.  So with emphasis on the ideas of:  what are they experiencing, why is it being shown, and what is the purpose of it; hopefully all these stories and relationships will tie together like melodious movements in an orchestra.

Joel also promised that there will be an explanation why the entire Fringe Team was trapped in amber until the year 2036.  Not only was that twist intended to be visually exciting, but it was a way of transporting the Fringe Team from the past to the future; for to be the saviors of our planet, they had to be preserved until they had the best chance of succeeding.  So the story of the Observers and the amber is at the forefront of this next season, as the over-arching story will be about what the world is missing and what it needs.

The “happy accident” of this last season of FRINGE is that it is set up so that new fans can jump right in and without having seen a single episode of the prior four years, new viewers can figure out what is going on and join in the fun.  Then for the more curious, they are welcome to watch episode 19 (“Letters of Transit”) from last season, or better yet to watch all the preceding four seasons.  But this final season was meant to welcome all viewers, new and old.

Josh Jackson happily added that he was ready to say goodbye because the opportunity to properly finish the show is the rarest thing to happen in television.  He also appreciates that FRINGE is getting the chance to tell the story they wanted to tell for the audience, which does not happen very often.  So it is their final gift to the fans – giving them a proper goodbye.  He was also excited that the show is finally exploring the idea of colonization by the Observers.  After years of being observed, to be conquered and ruled is a very different feeling, which puts humans in the curious position of being rebels.  This is a chance for them to reach outside their everyday lives and reclaim their planet from an invading, superior force.  So while  FRINGE has always felt like it was on the cutting edge of the future, and this is meeting it head-on.  It also provides a unique way to give emotional payoff for these characters, many who  have traveled through alternate realities and timelines to get where they are – and we get to see them finish their amazing journeys.  So, for Josh, he is satisfied where the story ends, and is incredibly happy they get to tell their ending, for better or worse.

Then for co-star Jasika Nicole, her one regret is that her character Astrid never had a chance to prepare Astrid’s father for her disappearance.  It worries her that he probably sat there wondering what happened to her when she never came home.  But perhaps that haunting  emotion is intended as it resonates through the next season; that vacancy felt by the world and the people who cared about them when the Fringe Division was trapped in the amber and what happened because of it.  She also acknowledged that this final season is all about the urgency of what our Fringe heroes must accomplish because there is so much at stake.  The entire world has gone downhill and it is up to our heroes to reverse the effects of it; and for those who watched Episode 19 from last season (“Letters of Transit”), that is where the 5th season picks up.  With so little time to tell the story they want to tell, she emphasized that each episode will feel like a roller coaster ride rushing towards the end.  But FRINGE is a show that intends to go out with a big bang; never quietly into the night.

Anna Torv also said that she felt it was extraordinarily fortunate that they knew going into fifth season that it was going to be their last and that they did not squander a moment of it and simply sprinted towards the end.  Thus, she is incredibly excited to focus on Olivia for this final journey and to see where it ends.

And for Lance Reddick, he simply forewarned that Broyles will surprise us this season — in who he is.  He recommended that fans keep careful watch for Broyles and to pay attention when he does.

FRINGE is about to embark on its final journey and you are invited to take this extraordinary journey with them.  Humankind is having to reclaim their planet from the mysterious Observers and it will be a fascinating fight.  Take this final adventure and discover how it all ends.  FRINGE’s fifth and final season begins Friday, September 28th at 9PM on Fox (CityTV in Canada)