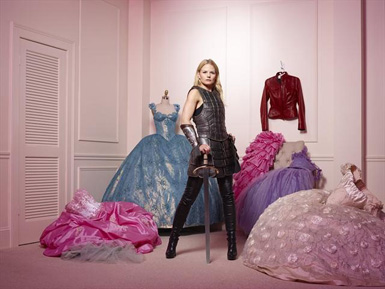 Looking back over the first season of ONCE UPON A TIME (the fairytale series with a twist), the one thing that stood out was not the Evil Queen’s curse; it was the curse of Emma Swan — for anyone who got close to Emma suffered for it.  From Sheriff Graham to Jefferson to August Booth, and even Emma’s own family Henry, David and Mary-Margaret, they all seemed to suffer more after Emma’s arrival.  Was it not enough that Regina’s curse had trapped them all in the magic-less world of Storybrooke, only to learn that the one person who could break that curse seemed to carry her own sort of curse with her.

For the doomed Sheriff Graham, just as he began to awaken to his former life and actively defy Regina, his heart was literally crushed to death.  For Jefferson, he had looked to Emma as his savior to reunite him with his daughter, only to find that she was powerless to help him forcing him to go to Regina and that backfired spectacularly, as Regina refused to honor their bargain.  For August Booth, Emma’s return triggered a return to his natural state where he was made entirely of wood.  Then for Henry, all Emma’s return was guarantee that his friction-filled relationship with his adoptive mother went from bad to worse. For David, he awoke from his coma to find himself married to a woman he did not know or love, forcing him in the precarious position of doubting himself and his love for Mary-Margaret.  Then for Mary-Margaret, she took a chance on love and was branded an adulteress and accused of murder because of it.

Emma’s return has not only fractured the curse’s hold on time itself, it set off a chain of events that did not bode well for those who got close to her.  Thus, it is possible to argue that even though Emma’s arrival in Storybrooke, for better or worse, was necessary to break the curse, it does not truly explain the emotional and physical damage that resulted to all those who got close to her. While David, Mary-Margaret and Henry will recover from the emotional torment they suffered until Emma broke Regina’s curse; can the same be said for the men in Emma’s life?  Sheriff Graham is dead; Jefferson is bereft; and August is no longer human.

One can only hope that by breaking Regina’s curse that it undid the damage that resulted during its evil stranglehold, and that with the restoration of memories and the return of magic, that Graham, Jefferson and August’s fates can be changed.  But our fear is that what has happened cannot be undone.  Memories will return, but the wounds inflicted cannot be erased.

So we are left to wonder:  is Emma Swan cursed to bring pain and suffering on those she cares about?  Or was that a side-effect of the Evil Queen’s curse, that try as she might, Emma’s quest would not absolve the scars incurred along the way?

If so, it bodes badly for any men – whether romantic interests or not – that come into Emma’s life.  Her track record by her own account prior to coming to Storybrooke was dismal at best; yet it seemed compounded by the magical effects of the curse.  So now that the curse has been broken, we hope that Emma’s luck with men would be less tragic, but fear that it could continue.  For Emma only broke the Evil Queen’s curse, she has not broken her own.  There seems to be something “tragic” hanging over Emma.  She was supposed to have escaped the curse by being placed into the fairy tree and taken by August to our world before Regina’s curse fell upon her.   Yet what if it was something else?

After all, Emma broke the curse stopping time and erasing everyone’s memories; then Mr. Gold promptly tossed another curse into the Wishing Well, unleashing magic upon Storybrooke.  So we are left wondering: if Regina’s curse was truly broken, wouldn’t they have all been transported back to the fairytale world?  Why is everyone still in Storybrooke?  Why hasn’t time been erased and everyone returned to the point in time just before Regina enacted her curse?

Is it because a curse can be broken, but not undone?  Plus, why was it necessary for Mr. Gold to return magic to a world that is not accustomed to it?  Does our world need magic amidst it? Or does Mr. Gold need the magic to take them all home again?   And if magic is that powerful, surely Graham, Jefferson and August can be healed, returned and revived again.  And if not, then what exactly is the curse of Emma Swan that zeroes in on the men in her life?  And if there should there be another romantic interest looming on the horizon, would it not be best to warn him to avoid Emma at all cost?

Emma Swan is a trouble-magnet.  The daughter of Snow White and Prince Charming, she embodies everything that the Evil Queen Regina hated and despised: pure love.  Maybe that was the insidious part of her curse – cursing Emma Swan so that those who care about her suffer.

It is too late for Graham – he already sacrificed his heart.  But is it too late for Jefferson and August?  Assuming Jefferson can be reunited with his daughter, will that be enough or will his fascination with Emma come back to haunt him?  Then as to August, he may have treated Emma like the younger sister he was supposed to protect, but his flirtatious banter with Emma makes us wonder if there is something more there too.

And who will be the first to recognize and identify that Emma is cursed in her own right and go about finding a way to save her?  After all, Emma saved everyone else, shouldn’t there be someone who now saves her? And what will it take to break the curse surrounding Emma?  Shall “true love’s kiss” be the only cure?  If so, where is Emma’s prince?  This is a story about fairytales after all.

ONCE UPON A TIME airs Sundays at 8PM on ABC (7PM on CTV in Canada) Catch up on past episodes you may have missed for free online at clicktowatch.tv