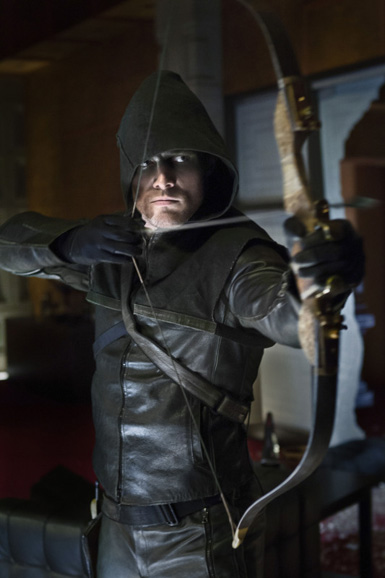 Lost at sea, a quest for vengeance, and a masked crusader, ARROW is the stuff legends are made of – or better yet, heroes.  When a young spoiled man finds his entire world stolen from him, the path home and to redemption is thorny and trouble-filled.   Oliver Queen (Stephen Amell) could not foresee that fateful day on his father’s yacht would be a pivot point in destiny; but for him, it was.  The man that subsequently came home five years later was not the same.  He was no longer the frivolous, carefree billionaire’s son, he was the heir to a fortune, a renown company, and a legacy entrusted by his father to wreak retribution against all those who sought to destroy them.  ARROW is not just a tale of vigilante justice, it is a story of a man who takes on the burden of cleaning up Starling City and eradicating the evil rooted there.  For those five years were not the only thing that Oliver lost, his father and a woman he loved where taken from him as well – making Oliver’s crusade personal and he will not stop until everyone who had a hand in it is destroyed.

ARROW is unabashedly a dark tale of vengeance.  It knows that its hero is but a man, and not a superhero and he will have to use his physical prowess, mental acuity and honed instincts to fight the criminals that have taken over Starling City.  One man standing against a vastly superior criminal syndicate stands little chance of success; but Oliver’s one advantage is no one will see him coming.  Donning a green hood and jacket, and calling himself The Green Arrow, no one will shall know his true identity; for the best weapon is the one anticipates.  Thus, the façade of The Green Arrow shall provide Oliver a strategic advantage.  It is but a sleight of hand, but an effective one.   It will allow him to live his life as Oliver Queen unsuspected, gathering the information he needs amongst the wealthy and amoral leaders of Starling, plotting his revenge all the while.

Unlike other heroes, The Green Arrow has no qualms about taking a life.  An “eye for an eye” is justly deserved for those who ruthlessly sought to kill Oliver, making his father and his girlfriend’s lives forfeit instead.  With villains carrying knives and shooting guns with real bullets, Oliver is not impenetrable and impervious to pain.  He must strike back accordingly, or he will only leave himself vulnerable to a returning problem.  ARROW thus poses an interesting dilemma: dare we root for a hero that is willing to kill? Fortunately, the answer is a resounding affirmative; for Oliver is not indiscriminate or hasty in selecting his targets.  Where justice demands action, he will take it.  To protect those he loves and those who cannot fend for themselves, Oliver will become both a shield and a sword.

The world of Oliver Queen is two-fold, murky and steeped in mystery.  Propelled by a list of names bestowed by his father, Oliver moves with strategic purpose.  Vengeance is never rash and lies in wait for the perfect time to strike.  But along the way, Oliver will also have to find his path to redemption.  He cannot be just a shell of a man conditioned to kill and rain down hell on those who have laid claim to Starling; Oliver must find his own humanity again.

Aiding in that journey, or perhaps hindering it are his mother Moira (Susanna Thompson) and her new-husband Walter Steele (Colin Salmon), his little sister Thea (Willa Holland), his best friend Tommy Merlyn (Colin Donnell), his new bodyguard John Diggle (David Ramsey) and his lost love, Laurel Lance (Katie Cassidy).  Figuring out just who is an ally and who may not have his best intentions at heart will prove challenging.  Five years is a long time and alliances have shifted, relationships have changed, and the people Oliver should be able to trust are perhaps the last people he should trust.  There will be those who feign happiness of his return, but plot his demise the second he returns; then he will find unexpected friends and forge new alliances in his quest as well.  So learning who to trust, if any one at all, shall be a thorny path for Oliver.

In addition, the world of Starling has become a house of mirrors, and what you see reflected may not be what is really there.  But Oliver has learned the art of illusion and can play a game of facades with the best of them.  Yet the one thing Oliver cannot protect against is his own heart.  Not only with his long-buried humanity be struggling to gain a foothold in his conscience again, so will Oliver’s yearnings to love again.  He is perhaps broken and betrayed, but Oliver still wants to have the life he had stolen from him again.  It is only a matter of choosing carefully, picking through the pieces, testing the bonds of friendship and family, and figuring out which are still strong and true.

In recent interviews at the Paley Center in Beverly Hills, Toronto’s Fan Expo, and San Diego Comic-Con, stars Stephen Amell, Katie Cassidy and the executive producers of ARROW shared their thoughts on the dangerous journey of Oliver Queen.

The one theme reinforced by all them is that Oliver is not only seeking vengeance, but redemption.  A man who seeks only to kill is but half a man.  To regain his life, Oliver must also find a way to reconnect with those around him.  Living in solitary isolation for five years may have stripped away pieces of his life and chipped away at his soul, leaving him damaged, but not lost.  Oliver just needs to find a way to make his life whole again, while finding a way to punish those who so richly deserve it.

That difficult balance and internal struggle is what makes ARROW so compelling. Stephen Amell’s portray of Oliver Queen as The Green Arrow seeks to ensnare us with the complexity and turmoil of the question:  Who is Oliver Queen?  Is he a man? A hero? A vigilante? Or is he something else entirely?  And what masks must he wear to find those responsible and once he does, what is the best punishment for each? For some, death is too lenient.  For others, perhaps they have suffered long enough.  Yet shall the weight of being judge, jury and executioner be a price too high for Oliver Queen?

To find out these answers to such difficult and thought-provoking questions, be sure to tune in for the premiere of ARROW on Wednesday, October 10th at 8PM on the CW (CTV Two in Canada).  Not everyone who wears a mask is to be feared; some are to be celebrated.