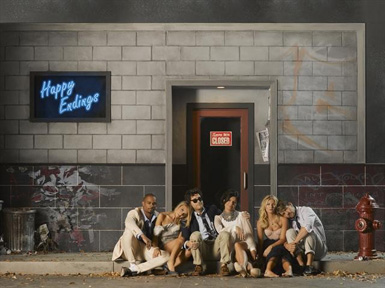 Don’t worry, be happy. Make that really really happy… because after a seemingly interminable hiatus, HAPPY ENDINGS returns with hilarious new episodes on Tuesday October 23rd at 9PM on ABC. In celebration of which, theTVaddict.com’s very own Senior West Coast Correspondent Tiffany Vogt recently had the distinct pleasure of attending a Paley Center for Media event in beautiful Beverly Hills to celebrate the return of HAPPY ENDINGS alongside DON’T TRUST THE B… (More on that later).

So just what did stars Elisha Cuthbert, Casey Wilson, Adam Pally, Damon Wayans Jr. and Zachary Knighton have to say about some of the hilarity and hijinx fans can expect from season three, which of their co-stars is most like their character and what is their pitch for a HAPPY ENDINGS/DON’T TRUST THE B… crossover? See for yourself, after the jump.