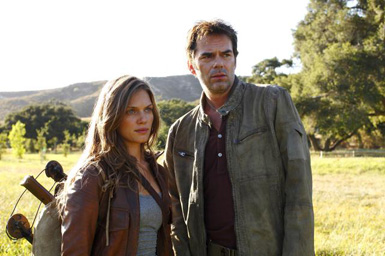 In an effort to help fellow REVOLUTION addicts get over the fact that they will have to wait until Monday October 29th for the hit NBC show’s next new episode as a result of tonight’s third and final Presidential debate, we thought fans might enjoy this exclusive one-on-one with stars Billy Burke and Tracy Spiridakos. And while Burke and Spiridakos — who were in Toronto at the start of the Fall season to promote REVOLUTION’s premiere on CityTV in Canada — were not surprisingly tight-lipped when it came to what the future holds for their characters of uncle Miles and niece Charlie Matheson respectively, they more than made up for their total and utter lack of spoilers with — as the title of this post suggests — some snappy answers to our silly questions. See for yourself, after the jump.

When you receive a script produced by J.J. Abrams, written by Eric Kripe and directed by Jon Favreau do you even read it or simply tell your agent “Yes!”
Billy Burke: First of all, you don’t receive that script because that script is locked away in a room.
Tracy Spiridakos: I had to go down to the casting office and sign a top secret confidentiality agreement. I was not allowed to take that script out of the office!
Burke: In my case, I met with Kripke and Favreau first, they told me everything about it and then you just say yes.

What kind of sales pitch did Kripke and Favreau give you to convince you to sign on to the project?
Spiridakos: We’re producing it!
Burke: Exactly! It’s a little bit, like “Hi, I’m Jon Favreau.” You hear the show is being produced by JJ, Kripke is writing it and Favreau is going to direct and in the measma that is pilot season, that’s what you’re looking for. If you’re going to take a chance on something you want to take a chance on something from people who like to hit home runs. It wasn’t a tough sell.

I’m always curious what it’s like for an actor, signing on to a series that potentially could take up the next five to seven years of their life.
Burke: Tell me about it. That’s always sitting there in the back of your head. If it’s a show that has some legs and lasts for a long time, is that what I want to be doing? And the short answer to that question is thankfully yes. I could see that happening here because REVOLUTION not only has turned out to be great entertainment, I’m having way too much fun shooting it.

As the likes of Keri Russell, Jennifer Garner, Evangeline Lilly and Anna Torv have so clearly illustrated, J.J. Abrams knows a thing or two about picking leading ladies. What do you think the Producers saw in Tracy that convinced them to give this relative unknown such a sizeable role?
Burke: I begged them to hire her! Actually I’m really impressed with their choice. It is a genius piece of casting and I’m so glad they went down that path instead, because I’m sure they had their pick of actresses who would have died to play this role. But the Producers took a chance on Tracy and in my opinion it’s one of those lightening in a bottle things. I think she’s just so perfectly suited for this.

When it comes to a show as shrouded in secrecy as REVOLUTION, how much more do you know than the audience?
Burke: We’re going to know things a couple of weeks before the audience. We get a script and we learn whatever piece of information at the time, but we’re going to be fans along with the show.

In my mind, one of the keys to any successful drama is a romantic component (See: LOST, CASTLE, etc.) What can you tell me about your character’s relationship prospects going forward!
Burke: First of all, our characters are related! [Laughs]
Spiridakos: I don’t know what the writers are going to do between Charlie and Nate. I don’t know where Nate’s loyalties lie. He’s a very interesting character in that we’re not sure if I should trust him or not. But I’m sure the writers have something in mind, I just don’t know about them yet.
Burke: Also, keep in mind, we’re constantly introducing new characters.

Is it safe to say that the show plans on revealing what happened between Miles and Monroe and why exactly he was found living in solitude in Chicago?
Burke: We’ll learn more about Miles through a series of flashbacks. The show isn’t too flashback heavy, but they are a device in the show. We use them to tell the story of what happened in the fifteen years since the lights went out and I’m as curious as everyone else as to where some of Miles’ character traits came from.

What’s your pitch for those who have yet to jump on the REVOLUTION bandwagon?
Burke: I don’t know if it’s our job to pitch the show. We’re just f**king actors. It’s why I didn’t become a salesman! I’m horrible and pitching things. But I can tell you this, it’s definitely a show I would watch and I don’t watch a lot of serialized television. And I’m not just saying this because I’m on the show, really.
Spiridakos: Every week the audience gets to jump in and go on this adventure with us and I feel like the viewers are going to have about as much fun as we are making it.
Burke: It’s good, trust us!

REVOLUTION airs Mondays at 10PM on NBC (CityTV in Canada)