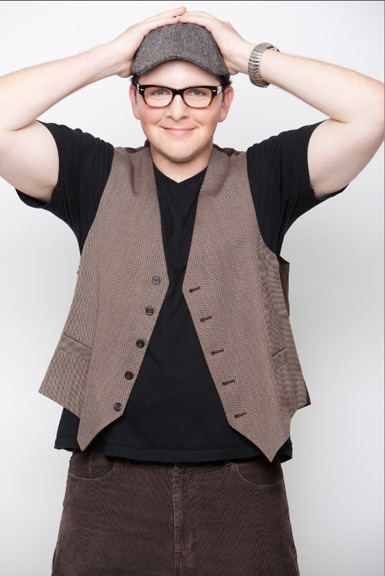 So this is a night-and-day situation for you.  Before on LIFE UNEXPECTED, your character had a calm reality with normal life and this time on BEAUTY AND THE BEAST, your character has a heightened-reality where he must face life-and-death stakes everyday.
AUSTIN:  Yeah, I cite the difference in that in normal everyday life you and me don’t have to go through our lives having to deal with stuff like this, so the normal highs and lows become high drama.  But when you have an external force pushing you into a situation where you’re really just reacting to the fact that it becomes life-and-death, you don’t have to create any of the drama.  The drama and the conflict is built in and forces your character into action.

One of the things this version of BEAUTY AND THE BEAST offers more of is the comedy element, which maybe because of the addition of J.T. Forbes, who you could have been portrayed more straight-laced.  But you seem to infuse J.T. with a friendliness and genuine friendship between J.T. and Vincent, and we get the sense that they could actually be friends in their prior lives.
AUSTIN:  Yes, and they were.  I think at the time of the pilot I wasn’t sure of the extent of the history because with TV you tend to proactively create the character history.  Like three seasons down the line, the executive producer could say, “We’re going to bring in the long, lost brother.”   But as an actor, you’ll be thinking, “I made the choice that my character was an only child.”  Like that character didn’t exist and now they are going to exist so you have to deal with that situation.  So I felt like in the pilot for BEAUTY AND THE BEAST the extend of J.T. and Vincent’s history was that they were roommates together in med school, and J.T. was doing medical research and Vincent was going to be a doctor.  Then he went off to Afghanistan and there was the whole military experiment, etc.  Then Vincent comes back from all that.  That was their history.  So I sought out the executive producers to get a sense and make the most detailed choices of what the specific character history is to try and understand completely where the character is coming from.  Not to put the best parts of my life into the character so that the character feels alive and engaging.  So what we talked about is that J.T. and Vincent are basically life-long friends.  It works out ’cause I felt that anyway.  There needs to be that true brotherly love.  The fact that their family is kind of out of the picture, whether that is because they are dead or are just not around, and before Catherine entered their existence, they only had each other to depend on.  Especially since Vincent’s brother died in 9/11.  It draws them closer together.  So it is like a multi-leveled collaboration with the writers and creators to make J.T. a more three-dimensional character; not just an expositional device or a confidante for Vincent.  What I always try to bring to a character is bring that sympathy that your normal, everyday person can relate to — especially where J.T.’s roommate and best friend is a beast or outcast and victim of a military experiment.  So I try to act like the character that the audience takes the ride with because I’m coming from an everyday perspective in this high stakes, supernatural environment.

It feels like there’s a warmth to J.T..  He’s not just a scientist solely interested in protecting his friend and acting very hostile.  He actually feels welcoming and like he’s curious.  All those qualities feel like they may not have come from the page, but something you interpreted out of the character.
AUSTIN:  I feel like as an actor when you audition for stuff the only way to succeed is to make it truly you.  Really good actors try to make the smart choices and that is to make the scene as dynamic and dramatic as possible; and those that come with experience know that to stand apart from even those auditions and to get a part that to rise above the fray, you’re best bet is to bring as much as yourself — and my own personality to every part that I do and that includes a warmth and an openness and a kind of loving quality.  It’s like the warmth that you would bring as any kind of friend.  So it’s kind of like the audience is my friend and we’re going through this together. That type of idea. And  I’m welcoming the audience in with open arms to whatever journey my character is taking.

We get a sense that J.T. is cautious and protective of his friend Vincent, but he still trusts him and is not afraid of the “beast.”  Is there any level of fear in their relationship because of the “beast” aspects or are they confident that everything is fine?
AUSTIN:  Well, it’s now 2012 and Vincent went off to Afghanistan in 2001.  So the idea is that within a year or two that the whole experiment happened.  So maybe in 2003, ’cause the incident with Catherine was 9 years ago, Vincent comes back to seek J.T. out ’cause he’s the only person that he trusts. So at that time he was still struggling with how to live with it.  He’s got these powers and extra-sensory abilities that are not in control and are dangerous.  ‘Cause he was basically modified into being a killing-machine and there’s no guidebook on how to deal with cross-genetics and the side-effects of the “beast”.  So those first couple of years with Vincent and J.T. were probably a struggle to deal with Vincent’s uncontrollable beast-instincts.  So it was discussed that there may have been a moment or two that Vincent went over the line and maybe hurt J.T., or that he may not have meant to hurt someone but hurt them by mistake when he had no control.  This is where the guilt comes in and so we get a sense that there’s some caution needed.  It’s proceed with caution when arguing with Vincent, so J.T. doesn’t want to go there.  Though he does try to talk with Vincent about how he can’t keep seeing Catherine or they could all be dead within a week.  It’s provoking a situation that could cause them all harm.  And the stress of it all could put pressure on Vincent and the beast could lash out uncontrollably again.

So humor could have been a defense-mechanism or way to keep the inner-beast calm because Vincent and J.T. live together?
AUSTIN:  Yeah, definitely.  J.T.’s more concerned about, “How do I keep my friend from getting hurt and how do we keep us all from getting hurt?”

If you were to describe the show, how would you describe it?
AUSTIN: It’s difficult to describe the show ’cause it’s the classic fairytale story set in the modern day where the beasts that are among us are terrorists.  It’s just a supernatural extension of that.  There are people who have it in them to do beastly, bad things and our show is a physical extension of the inner beast in all of us; also the connection you can find in that situation with someone else.  I feel BEAUTY AND THE BEAST at its heart is a romance.  It asks people to look deeper beyond the “beast” and see if anyone can truly love that person, and can that person really love someone else.

Looking at an obvious question, do you know what “J.T.” stands for?
AUSTIN:  No.  You kind of make up names in your head.  But my thought is that if someone calls you “J.T.” long enough, your name is J.T.  Like you don’t think of yourself or your name as “James Thomas” or whatever it is.    You just hear that name J.T. and that’s your name.  I hope that they figure out some kind of cool name, like from a famous scientist or something.  Its kind of fun to figure out what it does stand for.

So it’s not “James Tiberius”, like a nod to STAR TREK?
AUSTIN:  Oh, maybe!  Actually that would be a cool thing. That would be an awesome, awesome name!

To see more of J.T. and how his world expands and becomes even more treacherous now that Catherine has entered their protective world, be sure to tune in for the premiere of BEAUTY AND THE BEAST on Thursday, October 11th at 9PM on the CW (Showcase in Canada). Photo Credit: Vince Trupsin