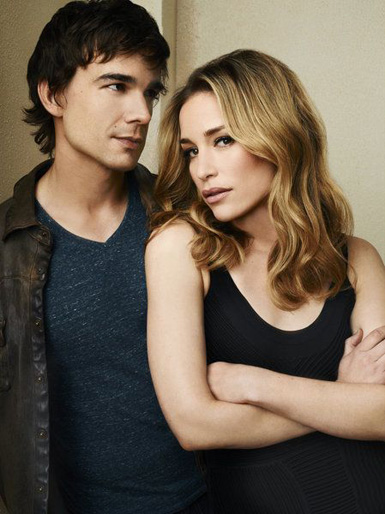 The journey of Annie Walker (Piper Perabo) has always been a love story.  From the very beginning, we knew that Annie was a girl who followed her heart to the ends of the earth and wherever it led, she would follow.  It began when Annie joined the CIA, in search of a man she fell in love with on holiday — a man who disappeared so easily that she figured out that he had to be a spy.  Yet Annie’s search for the elusive love of her life, Ben Mercer (Eoin Bailey), was just the beginning.  Slipping in and out of her life like a ghost, Ben was the man who gave Annie a taste for adventure and opened the door to international espionage; he introduced her to a world that she had always craved and gave her the courage to embrace it.

Then just as soon as she stepped through gleaming glass doors of the CIA and welcoming Annie with open arms was the equally mysterious Jai Wilcox (Sendhil Ramamurthy), who promised to take Annie on more adventures — which she may have gladly gone, but for a bomb that blew him to smithereens.  Also along the way and threaded throughout Annie’s spy journey, and yet just as elusively captivating was the Mossad agent Eyal Lavin (Oded Fehr), whose flirtatious banter kept Annie intrigued; and, better yet, who surprisingly came to Annie rescue by breaking her out of Russian prison after the CIA had abandoned her.  Then, more recently, there was the man who captured Annie’s heart:  Simon Fischer (Richard Coyle), a Russian spy who sacrificed his life protecting Annie from a rogue CIA agent.  But while Ben, Jai, Eyal and Simon have danced in and out of Annie’s life, there remained one constant in her life: Auggie Anderson (Chris Gorham).

It is said that a blind man sees everything.  In Auggie’s case, that is even more true. He did not need to see Annie’s beauty to fall in love with her; he only had to know her.  While he could sense by everyone else’s reactions that she was a naturally beautiful woman, Auggie saw into Annie’s soul.  He could hear the inflections in her voice, feel the grace and ease with which she moved when he walked with her, and could feel the warmth of genuine concern and affection for him each time they were together.   Auggie was not just enamored with a beautiful woman, he began to fall in love with a woman worthy of his love.

Alas, the love story of Annie and Auggie has been interrupted time and time again with various flirtations and other loves.  Auggie had a disastrous relationship with Liza Hearn (Emmanuelle Vaugier), the news reporter only seeking the inside scoop on the CIA; as well as recently falling in love with the daughter of his old mentor — Parker Rowland (Devin Kelley).  However, like Annie, Auggie’s relationships have ended abruptly each time he discovered that the women he was attracted could not fit into his life.  Also like Annie, Auggie slowly began to see that the one person who was constant in his life that he could depend on and trust, and who he began to appreciate more and more was right there by his side.  Annie was the girl that greeted him each day in the office and who called him from no matter where she was around the globe — both to check in for work and also because she cared enough to see how he was doing.

Annie may have been quicker to see that her feelings for Auggie had deepened and that she was falling in love with him, but quickly she put aside her feelings to let them both pursue their career goals and other relationships.  She knew in heart that  Auggie had to find out for himself if the relationship with Parker, with whom he was briefly engaged, could endure the test of time.  Fortunately for Annie, time was on her side and Parker became yet just another grain of sand in the ever-shifting hourglass.  But fate was unkind as Annie’s own undercover assignment introduced her to Simon Fischer and that clever spy stole her heart while she was not looking.

But in the wrestling match between fate and destiny, Annie’s world shattered again when the treacherous double-agent Lena  Smith (Sarah Clarke) shot Simon point-blank in the chest and turned the gun on Annie as well.  Annie may have survived, but if left an aching hole in heart where she had loved Simon.

Lena’s dastardly attempt to assassinate Annie along with Simon, however, was a wake-up call for Auggie.  Still grieving the loss of his own lady love, the thought of losing Annie as well struck him like a knife; and as if it were not enough that Lena tried to kill Annie and placed her at death’s door, Lena framed Annie as a traitor too.  Auggie had thought he had all the time in the world to coast through his life and take his relationship with Annie for granted. But one bullet to the chest was all it took to remind him that time waits for no man.  So while Auggie could not fight for Annie’s life as she lie in that hospital bed, he could fight for Annie’s career and clear her name.  That moment of clarity became the turning point for Auggie, who he suddenly realized that he could not live without Annie — that he could lose anyone else in his life, but not her.

Yet when Annie who came back from her near brush from death, she was not quite ready for love again.  Still raw from having the life she dreamed up ripped out from under her, Annie’s heart was full of vengeance.  She would not rest until she had tracked down Lena and ended her life as coldly as Lena had attempted to end hers — no matter the risk.  It was a fool hearted mission, and one which Annie may have regretted once she found herself stuck in a Russian prison without hope that the CIA would come for her.  Fortunately, Auggie was not about to allow fate to snatch Annie away from him again after she had fought off death itself, and he recruited Mossad agent Eyal Lavin to break Annie out of hell on Earth.

Alas, Auggie may have just handed over the love of his life to Eyal, who reaps the rewards of a grateful woman who thought the world had given up on her.  As we saw in this last episode, Eyal was back by special request of both his government and ours.  But it also provided a chance for Eyal to finally meet the man with the grand plan, who helped save Annie.  That bear-hug greeting from Eyal was not just to greet Auggie, it was to thank him.  Auggie had given Eyal something he had scarcely dream of, a love of his own.

The next page of Annie’s love story is yet unwritten, but we anxiously await to see if Eyal will prove worthy of Annie’s love.  Right now Eyal appears to be placed in a position where his government requires him to recruit Annie as a double-agent, yet he is struggling against his tender feelings for Annie and the trust she has bestowed upon him.  He realizes that if he continues to push her into betraying her country, she may never forgive him.  He also wonders if he can give up his own country for her.  This was the test that Simon faced and passed. Simon forsake his country for Annie and died because of it.  Such a harsh lesson may give Eyal pause. But Annie is worth it, if he only wants to reach out and take that risk.

Auggie may not realize that the game board has shifted again with Annie’s love up for grabs, but Auggie has learned one thing along the way:  Annie is not going anywhere.  She is loyal to her country and she will always come back to him.  He may not know that she already loves him, but he does sense that she would never leave him.  He just needs to be patient.

There is a saying that “if you love something, set it free, and if it comes back to you, it is yours forever.”  That is Annie Walker.  She always comes back.  Her love story is not yet over, and Auggie need only wait. She will be his forever.