Young actress Kaitlyn Dever has had quite the leap to stardom after stunning viewers with her performance in the FX series JUSTIFIED and then making the seamless transition working on the Tim Allen comedy series LAST MAN STANDING. In an exclusive interview, Kaitlyn talked about all the fun she is having working on LAST MAN STANDING and previewed her hot new films, “The Spectacular Now” and “Short Term 12.” 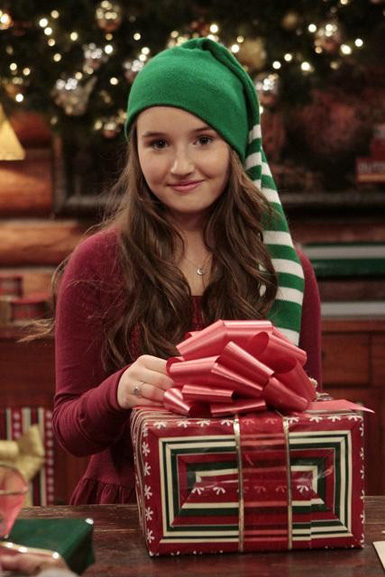 So in LAST MAN STANDING, who exactly is Eve Baxter?
KAITLYN: Eve’s basically very sarcastic and she has a very dry sense of humor. She’s always making fun of her sisters. She always has the funniest lines, and she’s really into sports. While in the first season, she was kind of tomboyish, she’s kind of coming out of that tomboy stage and she’s becoming a little more girly. Because she’s starting high school now, she’s changed a lot between seasons one and two.

Now that you’ve portrayed Eve over a season, what do you love best about her?
KAITLYN: Probably her dry sense of humor and her constantly making fun of Mandy, her older sister. Eve just has the funniest lines all the time — and I love being funny and making people laugh.

What’s it like to work with Molly Ephraim, who plays Mandy on the show?
KAITLYN: It’s great! She’s awesome. I don’t have older sisters in real life; I have younger sisters. So it’s kind of cool to have that kind of aspect because Amanda [Fuller] and Molly do feel like my real sisters. I’m always going over to Molly’s house, where we make cookies and bake. She just feels like a real older sister — actually both of them do.

Do you and Molly enjoy the more snarky scenes between your characters Mandy and Eve?
KAITLYN: [Laughs] Yeah, I love making Molly laugh. Like when we’re doing a take for a scene and if I can get her to laugh it’s really fun. When we were doing a taping last Tuesday on the show I made her laugh during a scene and it was really funny and I started to laugh too. That’s a lot of fun.

How have you adapted to having Amanda Fuller play the older sister Kristin on the show?
KAITLYN: We’ve adapted really well. She’s awesome. It’s been really easy. She’s great and we really connected and she’s really, really cool.

You also work with some illustrious comedians, Tim Allen and Nancy Travis. Do you feel you’re learning a lot about comedy from working with them?
KAITLYN: Yeah. I definitely have learned a lot. This is my first TV sitcom I’ve ever done. It’s a new concept for me and I’m always asking Tim question; and Tim’s always giving me advice, especially when they give me a quick rewrite. Like on a tape night they’ll come up to me with a new line — it’s kind of a punchline — and Tim will tell me how to say it. ‘Cause you have to time it. He has a way of timing his jokes perfectly with the audience laughing. You have to wait for them to stop laughing and then deliver your line. So he’s really good about figuring a way to say his lines. He’s always giving me great advice on how to do that.

Do you ever watch Tim and Nancy working kind of in awe and hoping your career will be as strong as where they are?
KAITLYN: I definitely learn a lot from both of them just working on a big set like that, and just working with them I learn so much.

My Editor has insisted that I pitch you this “crazy” idea for a LAST MAN STANDING episode that involves Tim Allen’s character reuniting with his former HOME IMPROVEMENT offspring in some sort of bizarre dream sequence that has him imagining that he has three boys instead of three girls!
KAITLYN: That would probably be very funny! That would be a great episode to do. I haven’t seen any HOME IMPROVEMENT episodes, but JTT [Jonathan Taylor Thomas] comes to the set every once in a while and he watches us. I’ve met him a couple of times. He’s really cool.

Do you pitch stories to the writers about what you would like to see Eve do on the show?
KAITLYN: Definitely! I keep asking one of our writers to write another Glorious Baxters music video episode. I loved doing that so much. We get to do choreography, dancing and it was really, really fun. I hope we get to do another one like that.

So you’re kind of pushing for the angle that Eve’s less into sports and more into music this season?
KAITLYN: Yeah, yeah, that would be really cool.

For you, what kinds of scenes do you like the best? What do you enjoy?
KAITLYN: Probably when Eve fights with Mandy. Those are fun. And any scenes where I have really good zingers.

As a character Eve is very socially conscious on the show. Is that something that is similar to who you? Has her social consciousness bled into your life?
KAITLYN: No, I don’t think so at all. We’re very different, Eve and I. The only thing we have in common is sarcasm, really. The rest of it is completely different. She’s really into sports — she knows everything about sports — and I know nothing about sports. You can ask me one question about it and I’ll know nothing — I get touchdown and slam-dunk confused. It’s crazy. [Laughs]

Are we going to be see more storylines of Eve pushing the envelope with her parents’ control?
KAITLYN: There’s an upcoming episode where Eve wants to join the Junior ROTC at her school, like in voting and frakking they have Mike Baxter’s opinion on everything, then they have Vanessa’s opinion. So in this ROTC episode, Eve wants to join and suddenly has this passion for ROTC; and Mike thinks it’s great. He thinks it’s really cool and into it, but Vanessa is not so sure about it and really doesn’t want Eve to join Junior ROTC. So Eve is trying to go against what she says and to do it anyway. That’s in an upcoming episode and it will be really good.

What do you appreciate the most about the relationships between Eve and her parents?
KAITLYN: In the first season, Eve and Mike were like friends, always going to games and talking about sports. But then in this season, there’s been less of that just because she’s starting high school and she’s trying to go against what her parents say. So, to me, she’s going a little crazy. She’s doing all these things and trying different things; trying to, I guess, find herself. I think she and her dad still share that buddy-buddy relationship and I think Vanessa’s relationship with her daughter is like any mother-daughter relationship. I think they are really close too.

Then what can fans expect in the upcoming holiday episode “Putting a Hit on Christmas”?
KAITLYN: It’s kind of cool ’cause it’s really different from a lot of other TV sitcoms because usually the sitcoms have a Christmas episode and its about getting the family together for Christmas and enjoying it together. But in our episode, the whole time Mike and Vanessa are trying to get rid of everyone so they can just have Christmas for the two of them alone. So they are trying to send everyone away, then Vanessa changes her mind and she wants the kids to come back, and then they send them away again — it’s back-and-forth. It’s different ’cause they are trying to get rid of the kids for Christmas instead of bringing them all together. It’s going to be a good episode.

How does Eve feel about it? Is she excited by the prospect of having escaped for Christmas?
KAITLYN: She’s very sneaky in this episode. Like a scene is going on and then Eve will pop her head up from behind a door or something. I loved doing that in this episode. She was very sneaky and listening in on everyone’s conversations.

You also have a couple of upcoming films: “The Spectacular Now” and “Short Term 12.” What can you share about those projects?
KAITLYN: “The Spectacular Now” I did over the summer and it was a lot of fun. It’s with Miles Teller and Shailene Woodley, and I play a girl named Crystal who is best friends with Shailene Woodley’s character. Crystal is very controlling and bossy of her friend. She thinks she knows more than anyone else. It’s a great film and it just got accepted into Sundance.

Congratulations! That’s cool. Are you going to Sundance?
KAITLYN: I am going. It will be my first time going to Sundance. I’m really, really excited. Then I also did “Short Term 12” about a month or two ago. Brie Larson was in “The Spectacular Now” and she was also in “Short Term 12.” So it was cool ’cause I got to work with her twice on two different movies. “Short Term 12” is like a very dark, dark role and I played a character who was very abused, depressed and she cut herself. It was interesting because I shot that movie on my hiatuses of LAST MAN STANDING. So it was going from comedy to drama, comedy to drama. It was a lot of switching around. But it was great, I loved it.

To see how the Baxter Christmas turns out and what Eve has to say about it, be sure to tune in Friday, December 14th at 8PM on ABC (CityTV in Canada), and look for Kaitlyn’s new films “The Spectacular Now” and “Short Term 12” as they are released later in 2013.