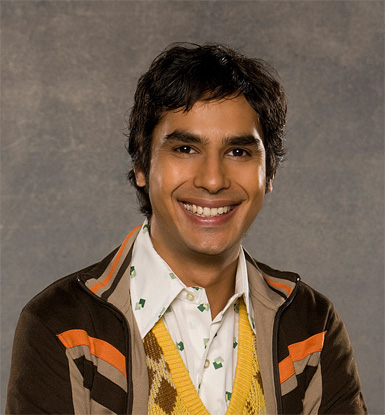 Given the stratospheric rise of CBS’ comedy series THE BIG BANG THEORY, it is no wonder the co-star KUNAL Nayyar feels a bit struck by lightening.  Life is good when you are king and working on a hit TV series like BIG BANG THEORY is enough to make any actor feel blessed and grateful that television audiences have embraced it so warmly.  In a recent press interview at the WB Mondo International Press Tour, Kunal candidly shared what life is like for him and what he thinks of the show’s hot success.

How much are you like your character, and how different are you from your character?
KUNAL::  I think every actor brings some elements of themselves to every character they play.  I don’t have, obviously, the wide?eyed innocence that Raj has. But I do really enjoy playing that.  I think I’m sort of easily excitable like Raj.  I get excited over things.  And I’m kind of an ass to my friends.  Like, I try to make fun of everything around me sort of like Raj does. I really enjoy playing him just because it’s really fun to play a character that is not malicious.  He’s a terrible liar and he really loves his friends.  So it’s really fun.

What are the surprises of the season for you this year?
KUNAL::  Well, in terms of the show, it’s just amazing that in our sixth season, the numbers that we’re getting.  Every year, it’s growing.  It’s surprising to me now.  At first, I was like, “Okay, this is really cool, this is really cool.”  Now it’s actually shocking.  When we get 17 1/2 million viewers, that’s shocking to me.  And for the story, I think nothing has really surprised me this year.  It’s just been more of what we do, which is every character is always fighting their own battles.  Like Wolowitz is adjusting to married life, and Leonard and Penny are always going to through their relationships, and Amy’s trying to sleep with Sheldon, and Raj is trying to find love.

How do you explain the rating numbers keep growing like this?  Like you say, it’s pretty rare.
KUNAL::  I can’t explain it.  The writing is phenomenal.  It all starts with the writing.  We’re very blessed to have, I think, the best writers, and it makes our job very easy.  And it was written almost in rhythm.  So if you just stayed true to the moment and you speak the words, it’s hilarious.  And so I’ll tell you that I think that people like watching the show because it’s nice to root for people who are good people.  You know, I think people like these guys.  They’re good guys.  And I think just people want to see them succeed or fail.  It’s hilarious when they do fail.  But I think it starts with the writing.

A lot of people own seasons of BIG BANG THEORY on home video. What are some of your favorite things on some of the seasons that they’ve included?
KUNAL::  I think it’s wonderful to watch the extras on DVDs because it really brings you closer to it.  I was wondering, like, if we do something really cool, does it ruin the magic, like, if we showed them the inside, behind the scenes?  But I think it brings it closer.  I love watching DVD extras.  I think it brings you closer to the process that you love to watch every day.  I love the bloopers that they put together.  And I think we did a set tour once, Simon and I, and that was a lot of fun.  I don’t know what we’re doing this year.

Do you hang out together?  I mean, you work so many hours together.
KUNAL::  Oh, yeah, we all hang out together. Dinners, drinks.  In the beginning, we would always go out together all the time and stuff.  But, like, Simon is married and he has a child, and I’m married.  And everyone’s life evolves, and then you have your own responsibilities. And now our families have evolved and gotten bigger, and so our obligations have taken us away.  We still love hanging out with each other.  But it’s different.  In the beginning, it was like, “Let’s go out here, let’s go have dinner.”  And now it’s we wake up in the morning, go to work, and we’re all sitting around, reading the paper at the same breakfast table, talking about, “Oh, did you read that?”  It’s really comfortable.  No one is trying.  And in the beginning, you might only have a short period of time together, because you don’t know if the show’s [going to make it].  So you really try to cram everything in together, get to know each other, get to know each other.  And now it’s just so lovely.

How do you feel about the expanding cast, now that there are these new female characters who have come and flushed out their world?
KUNAL::  I love it.  Because it’s so great, because it really allows ?? it’s fun to see.  It’s really been good for Penny, I think, because you get to see Penny in a light outside of the boys.  You get to see her be with the girls, and you get to see her insecurities bouncing off people that are trying to ?? who are ?? I don’t know.  Like, I feel like those two characters are almost like boys.  You know what I mean?  It’s so funny.  It’s been great.  And we’ve done that in the past where we’ve had guest stars that we’ve tried to make recurring or we’ve tried to ?? and it just hasn’t worked.  And we just got really lucky with both Mayim and Melissa, because not only are they talented, but I think that they just fit in with the rhythm of the show.

What do you think of those storylines in terms of not just the actors fitting in but the whole dynamic from the beginning when they were all just the guys and they were total geeks to all these women?
KUNAL::  Oh, it’s great.  I think it’s one of the best things that ever happened to our show, yeah.

Do you feel yourself you are a geek and nerd?  Do you like comic books and sci?fi?
KUNAL::  I like video games and I like “Lord of the Rings” and STAR WARS.  I’m not a big STAR TREK guy.  I think everyone is geeky about something.  I’m not like a total only comic books or I’m only totally video games.  I like some stuff.  It’s hard for me.  Like, there’s old vintage music that I love.  There’s some classical music that I like, so I’m kind of a geek about that.  I just started learning how to become a DJ.  I’m kind of a geek about that.  Or I’m a geek about golf.  I’m obsessed with golf.  So there’s many things that I’m geeky about.

Do you ever feel like the underdog?
KUNAL:: Oh, my God, yeah.  I mean, I’ll be at the coolest party at the Emmys and feel like I don’t belong.  Always, always.  That sounds horrible.  I don’t always feel like an underdog.  But, yeah, there are moments in my life when I do feel like I don’t belong here or maybe I’m not worthy of the success or maybe I’m not ?? I didn’t put in my time.  I went to grad school.  I got my Master’s degree in acting.  And then I got on the biggest show in television.  And I didn’t have to wait tables for five years.  So maybe ?? am I worthy of this?  I think ?? without this turning into a therapy session, I think everyone, at some point in their life, feels like that.

How do you manage the fame right now after 6 1/2 seasons?
KUNAL::  I mean, I live a pretty private life. That’s how I handle it.  I’m not at the Hollywood nightclubs all the time and I try to stay away from when TMZ asks me questions.  I just try to stay away from all that stuff.  I have the same friends I’ve had since the show started.  Before the show started, if I began to act like a celebrity, I think my family would disown me.  They’d be like, “What’s wrong with you?”  So, yeah, I just try to just fly under the radar.

Do you get recognized by fans?
KUNAL::  It happens sometimes.  I’ll be inside a restaurant and then someone will see me.  And then, an hour and a half later, I’m leaving the restaurant and there’s like 35 people outside.  And so I am always ?? I try to sign every single autograph.   Always, you know.  I saw Tom Hanks do that once.  Early on, we were at a concert somewhere, 75?person concert or something, and he was there with his wife and after the concert, the lights come on and it’s “oh, my God, Tom Hanks.” He stayed for an hour and signed every single person’s autograph. I said, “That’s what I want to be.”  Because people who I looked up to when I asked for their autographs and they weren’t so nice about it, and I promised myself I would really never try to become that person.

To see where the rocky path to love takes Raj this season, be sure to tune in for an all new episode of THE BIG BANG THEORY on Thursday, January 3rd at 8PM on CBS (CTV in Canada).