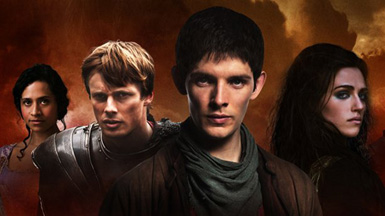 Now that has been officially announced that MERLIN’s fifth season will be its last, it was a tricky treat to try to pry a few teasers from the stars of the show about what the epic final season will offer.  Doing their best to dodge questions, stars Colin Morgan, Katie McGrath, and Bradley James offered what they could in this exclusive interview.

When exactly did you finish filming for this last season?
COLIN: We finished about 8 weeks ago.

So you can answer all our questions about what’s going to happen this next season then.
COLIN:  [Laughs] We’re going to be very cunning about it.

Do you think this final season is going to give closure to the fans?
COLIN:  I think everything people wanted to see is fulfilled.  In the fifth season, I was very proud of how everything was handled.  It is definitely the strongest it has been.

Will there be a final scene for Morgana and Merlin?
KATIE:  [Laughs] I don’t know! You’re going to have to tune in and watch. You’re trying to get us to give something away.
COLIN:  And we won’t give anything away.
KATIE:  We’re like on the football field here, we’re watching all sides.

The big question for this season is how long before Arthur and Morgana begin to suspect that there is something more going on with Merlin.  So much time has lapsed and so many coincidences have happened. Surely there must be some inkling.
COLIN:  You’re right.  Possibly.
KATIE:  [Laughs] Who knows!
COLIN:  It would be wrong of us to give any specific details. But we can speculate that there is a fun element of that for the fans.

On a safer, less spoiler topic, what has it been like for you to bring these iconic characters to life and see them through this journey?
COLIN:  It was always about the growing up tale for Merlin.  He started out in Camelot doing all the dirty jobs to becoming the king’s confidant and friend — and look how far he has come.  It’s fantastic.
KATIE:  And for Morgana, she was a spoiled, entitled princess and is now this malevolent, magical sorceress.  Everyone had a big journey, but I think her change has been the most drastic and a challenge to play.  I’ve enjoyed it very, very much.
BRADLEY:  You find that the journey Arthur has made over the course of the five years is quite extreme.  I think with Arthur you were always aware of where he was going to end up, to be the heroic, noble king that he is.  To start off with, he was the antithesis of that.  So the journey has been a very gradual one and he has found himself in a completely different place than where he was when we started the show.

Maybe you could share a favorite memory from one the earlier seasons that you will take away from this journey.
KATIE:  My favorite memory of MERLIN from filming was in the first season, actually.  We were all playing hide-and-seek in the castle, at night time.  For some reason, all four of us weren’t in a scene together and all decided to play hide-and-seek in the dark, in our full costumes.  That was fun.
BRADLEY:  That was fun!
KATIE:  It sort of sums up the five years and the laughs we had.

Is there anything you can share about what’s upcoming in the 5th season?  Maybe just a few teasers?
BRADLEY:  Mordred’s back — I’m not sure what I can tell you without telling you what happens in the show!

We know there’s the 3-year gap.  You can surely talk about what happened during that time period for our heroes?
BRADLEY:  Yes, three years have gone by.  That’s what I can tell you.
KATIE:  I can tell you what happens with Morgana.  For two years of that period, Morgana has been held captive because of her magic and it is a very important storyline for her in season five is that everything she has feared her whole life about being persecuted for having magic has all come true.  She has been persecuted.  She has been tortured.  She’s been kept locked up.  I think that the fact that her fears have actually happened means that she feels vindicated in removing Arthur from power and in taking over because she’s protecting people like herself.

What has it been like for Merlin?  I imagine that this being a time of peace and prosperity means that he is either proud and happy, or maybe he feels lonely because everyone is successfully moving on with their lives and he is still in a kind of stagnant place.
COLIN:  Yes, it is definitely a double-edged sword for Merlin in a way.  The kingdom is in a good position right now.  It’s the strongest it has ever been. It’s the happiest it has ever been.  But Merlin is still not close to that future that he dreams of and that he can reveal himself in.  So he dreams of that place.  He envies that everyone flourishes in their own lives but he cannot yet in his.  So it’s mixed emotions.  But very quickly the darkness looms and hangs over them over the majority of the season.

Since this season reintroduces Mordred.  Can you talk about what he will be doing with your characters?
KATIE:  Mordred is a very important relationship for Morgana.  Obviously in years past, he brought out a very maternal side of her.  But when Mordred comes back, he is obviously a man, so he’s very dynamic.  So for the first time Morgana feels like she has an equal to sort of plot and plan with, and she’s been waiting for that for many years.   His arrival is very exciting for her.

Then what has been going on for Arthur and Gwen? Are they blissfully living married life together?
BRADLEY:  Camelot is in a very good place when we start at the beginning of series 5 and a big part of that is Arthur and Gwen have been married for 3 years.  So they probably bicker every now and then.  Apart from that everything is great.

Does Arthur get more opportunities to work more with the Knights of Camelot? I imagine that he is needed on the throne more, but he is stubborn and may want to go out on adventures still.
BRADLEY:  Arthur is a very hands-on king.  He likes to get out there and do things himself. So he still gets out on adventures and quests with his group of mates.  So the Knights are involved in that regard because he is bound and determined to go on adventures.

With those few teasing tid-bits, and knowing that this is the season that Merlin’s secret will finally be revealed, be sure to tune in for the premiere of MERLIN on Friday, January 4th at 10:00 p.m. on Syfy.  To read more about this momentous final season, be sure to check out: Spoiler Alert! Colin Morgan and Angel Coulby Preview MERLIN Season Five