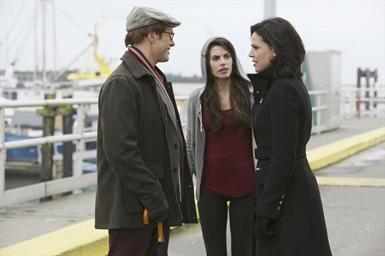 Shocking everyone, ONCE UPON A TIME dared to torment fans by nearly killing off another fan favorite right before their eyes.  The beloved, gentle Dr. Archie Hopper looked like a goner when Cora masquerading as Regina wrung his neck, leaving his lifeless body to be found framing Regina for his death.  But it was not until the last minute that we saw that Archie had been granted a reprieve.  His life had been spared as he still had a big part to play in Cora and Hook’s vengeance.

Here are some answers to some of the burning questions that remain from this jaw-dropping, nearly heart-breaking episode from executive producers Adam Horowitz and Eddy Kitsis.

Did you always know that you didn’t really want to kill Archie?
EDDY:  Oh, yeah.

Would it be too big a thing to kill off any of the main characters at this point?
EDDY:  We can kill anyone.  I think that’s a big deal.  Obviously in killing off a main character — it is obviously something we’ve done on the show (Sheriff Graham, which I still get death threats about) — but for us as writers we looked at: What does Cora need? She needs information.  If you come to a strange land and you’ve never been there, a psychiatrist is perfect.  He knows everyone’s secrets.  He knows how they run.  Mr. Gold has gone to him. Henry’s gone to him.  And so he is more valuable to her alive right now.  But you never know what’s going to happen.
So that moment at the end where Cora says she doesn’t know who she killed, is that someone we should take note of as the story moves forward?
ADAM:  It is only something to be worried about in that here is a woman who doesn’t care about who she kills.
EDDY:  To Cora, he’s just some schmuck she found.  She literally took a random Storybrooke person and killed him.  It’s not someone we will see their backstory.

We also saw Emma finally dive more into the magic aspect.  With the warning of consequences, how will that be playing out for the rest of the season?
ADAM:  It’s obviously a new element that’s been introduced and gives Emma something to explore and discover and what that means.  How that’s going to play out? We’re not going to tell you.  We want you to discover it in the show.

One of the things you guys kind of laid a foundation for was there was the curse, which erased everyone’s memories and put them in a stagnant time portal, but in the end of last season when they broke that Mr. Gold put the other portion in the well and brought back magic.  But he used the “True Love” potion which in the fairytale land made Mary-Margaret and David invincible to the Queen’s magic and they could not be killed.  Is that something that could still be in play here in Storybrooke?
EDDY:  I think what he did was use the power of true love to bring back magic — and magic in neutral form.  That is to say we’ve seen fairy dust, which is good magic, and we’ve seen Mr. Gold do some weird stuff, which is dark magic.  It’s like Storybrooke has been “dry” and now “prohibition” is over.  This was just a way to get the “still” running again.

So David and Mary-Margaret are now longer invincible and Regina can kill them?
EDDY:  Well, it is in a different land.
ADAM:  All bets are off.

Does Regina have a next move immediately or is she kind of laying low for the next few episodes?
EDDY:  She’s laying low and she has a next move.
ADAM:  She is both.

So she’s not as “broken” as Cora believes?
EDDY:  The real question is:  How persuasive is Cora?  And for somebody who’s been off magic, will they return?

Are you figuring out situations where Emma will use her magic, particularly with Cora in town?
ADAM:  Emma’s abilities with magic is something we want to explore, but it’s not about coming up with situations to use it.  It’s more about the larger thing with Emma, which is now that she is back and she is with her family and Henry, it is about looking at herself and who she is.
EDDY:  And I think to her magic is frightening.  She just realized a little bit ago that this was all real and she just got back from this crazy land, and I think it frightens her to realize that this magic is inside her.  So I think you’ll see her using it when she needs to.

Will that create a conflict with Henry since he is so anti-magic?
EDDY:  I think that he’s anti-bad magic.  But what is interesting is now that magic is brought to Storybrooke and now that there are people who use it in Henry’s life, how does he feel about it?  And that’s something that gets explored fairly quickly in this season.

So while Archie was spared, there is certainly more death and darkness looming on the horizon for Storybrooke.  Cora and Hook are no where done yet and pity the poor souls who get in their way.  To see what’s next, be sure to tune in next Sunday, January 13th for the episode entitled “The Outsider.”  Just who could that be and what part shall they play?  Aren’t we just dying to know!