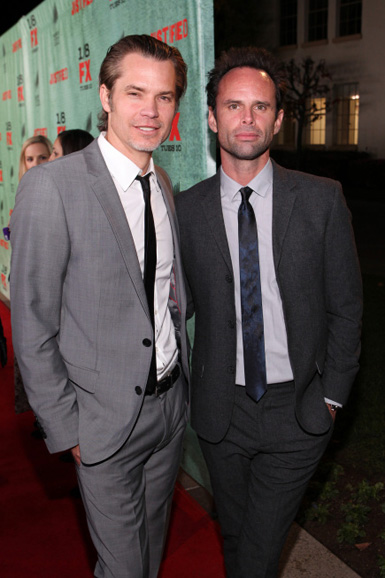 The past three seasons of JUSTIFIED have taught us that Raylan Givens (Timothy Olyphant) is not a man to be trifled with. He does not seek trouble, but if trouble comes looking for him, he will greet it head on, shooting first, and asking questions later.  But as can be expected for a man who chose to be a U.S. Marshal and who found himself thrust back into the serpent’s nest of a community rife with lawlessness and criminal enterprises, trouble lurks around every corner.

So when season one reunited Raylan with an old childhood friend who chose a different path, their fates drew them together again on opposite sides of the law.  Yet the lives of Raylan and Boyd Crowder (Walton Goggins) were not so simply defined.  They started that season with guns drawn upon each other, and ended the season fighting together to save each other’s lives.  For a common enemy can unite even men who view each other from opposite sides.

Then the second season introduced the magnificent Mags Bennett (Margo Martindale) and her ruthless clan whose influence was suffocating the life out of the entire Harlan community.  So while Raylan and Boyd eyed each other warily that season, their mutual interests won out and they helped each other so achieve a peaceful resolution for a second time.  And then again, in the third season, an interloper came to Harlan and twisted everyone’s lives into knots and created an uproar over the drug enterprise left untended since Mags’ death.  Raylan and Boyd’s interests did not necessarily completely align, but they independently sought to rid Harlan Country of the unseemly carpet-bagger who wrought havoc in all their lives.

So this year, without the controlling and domineering influence of Bo Crowder (M.C. Gainey), Mags Bennett, or Quarles (Neal McDonough), a power vacuum has left things tenuously in the hands of Boyd, who is anxious to establish himself as king of Harlan’s criminal underworld.  It has also left Raylan hoping to distance himself as far as possible from his ties to the community that has only brought him death and despair.  However, Harlan continues to taunt Raylan — he can never quite escape as his own father remains immersed in its underbelly.

Accordingly, this season, we discover the world according to Arlo (Raymond Barry).  Every day Raylan must curse every breath Arlo takes, for his father surely does the same for him.  Shockingly, as seen at the end of last season, Arlo even tried to assassinate his own son.  But when Arlo discovered his failure to kill Raylan, Arlo did the next best thing: he confessed to a crime he did not commit to take the fall for Boyd; thus establishing that Arlo viewed Boyd more of a son than Raylan.

Viewers must watch carefully as this season revisits the intertwined lives of Raylan, Boyd and Arlo and the simmering hot-bed of crime in Harlan as JUSTIFIED guarantees to spring a few more surprises upon us.   In fact, in the first returning episode “Hole in the Wall,” Raylan finds that Arlo is still hiding a secret or two that will consume them all.

However, Raylan has just found out that he is to be a father and now that Winona (Natalie Zea) has fled Raylan’s dangerous life, he is a bit distracted.  Raylan wants to be a better father than Arlo was and he wants to be a better man; yet, Raylan did not exactly have a good father-figure in his own life and is unsure how to make the right choices.  Raylan is a good man.  He wants to do the right thing.  He also wants to be a law-abiding man who upholds the law.  That is just not the path set before him.  In a hilarious tale of how a Panamanian diplomatic courier bag and a bail-jumper enter Raylan’s life in “Hole in the Wall,” this season’s adventure begins off with a rip-roaring start.

With Raylan distracted with his own problems, Boyd is similarly ensnared by a surprising new development — a religious revival is bleeding his criminal businesses dry.  Familiar with the intoxication of absolution and faith in something greater than oneself, Boyd eyes the encroaching religious fervor warily and enlists the aid of an old friend in solidifying his power-base.

In claiming and building the lives they want, Raylan and Boyd have a tumultuous path ahead.  Hear what stars Timothy Olyphant and Walton Goggins had to say about Season 4 and its surprises:

Then be sure to check back next week to see what their co-stars had to say about their character’s parts to play as the season’s new mystery unfolds.  Arlo’s secret creates ripple-effects and will lead everyone on a merry chase.  Join the fun and see where it leads.

JUSTIFIED returns for its fourth season on Tuesday, January 8th at 10PM on FX.