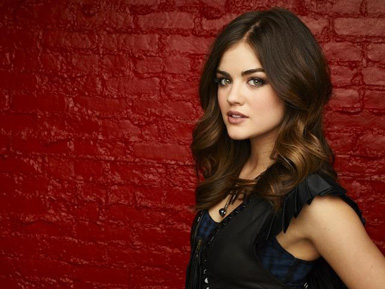 As PRETTY LITTLE LIARS continues to race through its adrenaline-pumping third season, the stakes have been raised, the body count continues to rise, and there is no end in sight as to who the final “A” will be behind those mysterious, deadly texts stalking the quartet of Rosewood. In a recent press interview at the WB Mondo International Press Tour, co-star Lucy Hale candidly shared her thoughts on PRETTY LITTLE LIARS and some of her own favorite TV shows.

How do you identify most with ARIA, and what were the biggest differences?
LUCY HALE: She’s really sensitive and she’s really about the relationships with people.  She’s close with her family.  She’s close with her boyfriend and her friends.  And, you know, that’s where the heart of Aria really comes from, because I’m the same way.  But she’s more of a ?? I feel I’m a little bit ?? I’m older in real life than Aria, so I guess the struggle with the character was just trying to keep her young and a little naive to life.  Because I feel like Lucy is 23.  I started the show when I was 20.  I was just sort of keeping that bright?eyed, excited?about?the?world kind of thing.  And obviously, I couldn’t relate to the situations that they’re going through.  I’ve never had a friend pass away and I’ve never had someone try to ruin my life and reveal all my secrets.  So, yeah, I guess that’s how I struggled.

What were you like at Aria’s age?
LUCY HALE:  Oh, man, 16 and 17?  I just moved out to California, and so I guess, in that sense, I was very naive about L.A. and about Hollywood and about auditions.  And I think it’s a good thing.  Because if I were to have moved out now, I would have been like, this will never happen; I’m just going to go back home and go to school.  But I was just very excited about trying new things.  And coming from a smaller town and to one of the craziest cities in the world, I was just very excited about new experiences, I guess.

Who’s changed the most during the course of those three years?  Do you think it’s you or Aria?
LUCY HALE: That’s one I’ve never gotten.  I think for me personally, I’ve just gotten busier.  It’s just been like scheduling kind of.  I’ve gotten to meet a lot of great people, do a lot of interesting things.  But I think internally, Aria has had to grow up so fast, you know.  They’ve gone through so many things, and I think she’s gotten really tough and she’s gotten really strong.  So I’d have to say for me I still feel like the same person.  I think Aria’s just changed as a person in general, if that answers your question, yeah.

What you think of the way people watch TV when it comes to home video and if you do that with shows as well?
LUCY HALE:  Absolutely.  You know, for me I’ve caught on to shows that, you know, are done we’re done a few years ago, but it was something I wanted to watch.  And I think that, you know, with DVDs and even with watching online, I feel like a lot of people watch our show on Hulu and on YouTube, and a lot of people internationally.  It’s incredible.  It’s just I want our show to live forever, whether we’re shooting for a long time or whether it’s through media.

Do you get watch the special features or any of that stuff?
LUCY HALE:  Oh, I love a good blooper reel, because I love to see ?? because our show is so intense all the time.  And it’s really not when we’re shooting, because we’re goofing off and we’ll have to do something over and over again because we’re cracking up about something that happened before we started shooting.  And so I love that kind stuff, because at the end of the day, you realize it’s real people and this is their job.  So I guess that’s why I like it.

Are there shows you’ve discovered watching them that way?
LUCY HALE:  Well, I started watching BREAKING BAD late into the game.  So I still have a little bit to catch up on.  But the other day I started watching SAVED BY THE BELL again, because I used to watch it growing up.  I don’t know.  I guess it was a comforting thing.  So I went through Netflix and I got a box set.

On a show like yours, it could have been a nightmare if you guys hadn’t got along.
LUCY HALE:  I’m telling you, when I read the script, and I was like “This is going to be great.”  I was like, “But four girls?  This is going to be a nightmare.”  But I’m telling you, it is the perfect experience.  We’re not all necessarily best friends off set, but we all respect each other.  We all get along.  And it’s sort of we go there, everyone’s professional, everyone’s ready to work and excited about it.   But, yeah, we did.  We spent our first Thanksgiving together.  So it’s been three years this past Thanksgiving that we’ve done the show.  And it’s just great, you know.  I love the people I work with, and I couldn’t ?? we’re very, very lucky. I think that the reason we all get along is because we all look very different.  I think we’re all going to have very different careers.  And I think we’ve realized what we have to offer.  But Ashley is definitely the girl that I’ll talk about clothes with or about guys or something, so she’s like my little gossip friend. Shay is into philanthropy work.  She’s really big into charity.  But she’s also good at home decor, so she’s always on Pinterest, and so we’ll talk about that.  And then Troian is just brilliant.  She’s very intelligent.  She’s the friend that I’ll go to, to talk to about deeper stuff, I guess.  So it’s fun to have a lot of different types of friends.  It’s a good group of people.

Do you test your music out on all of them?
LUCY HALE:  Not yet, because we start recording next week.  But I’ll get little texts, and they’re all very excited about it.  So it’s nice to have their support.

How did that come about for you, and what are you hoping to achieve?
LUCY HALE:  The music?  Well, I actually started out in music.  I grew up performing and singing.  And acting, the idea of it just sort of fell into my lap.  And I was a little hesitant at first, but I was like, okay, I’ll try it.  And so I did and I got some luck in it, which is cool.  That’s why I’m here.  But I’m going back to why I got into it in the first place.  And I think that, you know, just me talking about it that’s my passion.  That’s what I want to do.  I know I have a lot to prove just because it’s like here’s an actress who’s making an album.  We’ve heard that story a million times before.  But I think that once you hear the music, you hear how genuine it is, because I am writing it.  And it’s been a fun experience.  It’s been a year, and I’m just so excited. I’m doing country. I think people that know me and knew me before the show knew that I started in music.  And being from Tennessee definitely helps.  But it’s been great.  I’m really excited for people to hear it.

To see more of the heart-racing third season of PRETTY LITTLE LIARS, be sure to tune in for all new episodes starting Tuesday, January 8th at 8:00 p.m. on ABC Family (Much Music in Canada).  A has just a few more surprises in store! Catch up with past episodes you may have missed for free online at clicktowatch.tv