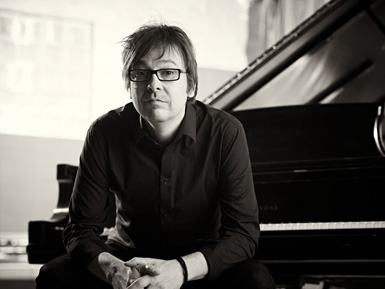 For every great death scene or spooky, supernatural moment, there is a composer who has created the the sounds which catch our attention and set the mood perfectly so that the emotion of what we see feels real.  For Syfy’s supernatural series BEING HUMAN, the man behind the sorrowful and searching sounds of Aidan, Sally and Josh’s journey is composer FM Le Sieur.  In an exclusive interview, FM Le Sieur shared insights about how he came to work on the show and his approach to bringing the BEING HUMAN lyrical sounds to life.

How did you first initially get approached to score the music for Syfy’s BEING HUMAN?
FM Le Sieur: Many composers were asked to submit sketches for this BEING HUMAN. We all received four scenes and I had to imagine what kind of music I would create for those scenes. I immediately connected with the character of Aidan (Sam Witwer), the vampire, and the music for his scene was the first thing I wrote. When I got the job, Jeremy Carver & Anna Fricke [the showrunners] later told me that it was that song that made them stop the search. It was called “Basses & Werewolves”, and is on the upcoming BEING HUMAN album under the name “Aidan.”

Did you have any initial thoughts on the kind of music you wanted to highlight in the show?
FM Le Sieur: With others shows of vampires around; the show, and me as well, really wanted to find our own personality. I tried to avoid anything cliché. Right at the beginning I wanted an urban sound, young and something to illustrate the bonding between the roommates. The friendship was important to communicate. I wanted also to have style that was a blend of song and score elements, so the music of the show is half song driven/half pure score. A contemporary sound with an edge.

Has that sense of music for the show changed or evolved while working on the show?
FM Le Sieur: When I saw the first episode I realized how much the show was also funny and quirky. So that push me to create others mood of music to illustrate it. As new characters are introduced, I get to write new music for them. And similar to the storylines of the main characters, so in that way the music is always evolving with the journey of the characters.

Do you have specific sounds that you choose as kind of a theme for each character?
FM Le Sieur: I really started with Aidan. I had this idea of writing for 2 electric basses so that sound was initially for Aidan. Then I tried to give Josh (Sam Huntington), the werewolf, his own personality: more acoustic and slide guitar. Sally (Meaghan Rath), the ghost, uses piano more than the other two. Then all those sounds and textures became part of a BEING HUMAN sound, overall. Each of the characters is trying to be part of a normal world even though they are anything but normal. I tried to reflect this in the music by choosing some sounds that the audience would recognize, and some that have them saying, “What was that?!”

What has been your go-to sound/type of music for the show that you think exemplifies what it should sound like to the audience?
FM Le Sieur: The sound of BEING HUMAN is an urban sound with my unique mix of two electric basses.

Do you have any favorite kinds of scenes on BEING HUMAN that you enjoy composing for?
FM Le Sieur: I love the turning scenes when Josh is turning into a werewolf. Also when Aidan is not sure if you he wants to bite a girl or not. Sally also is character who is evolving a lot; a lot of fun there too. I also like composing the scenes when they are all together. We saw a lot of that in the first season, and I get to do more of it in the third season, which I’m currently working on.

And are there any types of scenes that you find challenging to compose for?
FM Le Sieur: The challenge in a supernatural show comes when you have to write music for a special effects scene that actually doesn’t exist yet! Many times when I get the footage to write music to, you see what we call a green screen with the description of the scene. Like, “Ghost evaporates” or “Two wolves are fighting”, so you have to imagine that there will be wolf there…. Who actually is not there yet. When I get those, sometimes I call the production team and ask them to describe the action to me so I can get a better sense of what the audience will see on their television screen.

Just generally, how has been the experience of working on BEING HUMAN as a composer?
FM Le Sieur: Very good. The show is good, a lot things are happening, you never know what’s going to happen next in every episode. Great characters and  great the cast it’s a delight!

Then looking back at where it all began, maybe you can describe how did you initially got involved with composing music?
FM Le Sieur: I took piano lesson as a kid, and very early on I noticed that my fingers moved faster on the keyboard than my eyes on the sheet music, and I was playing faster than I was sightreading. I thought it was easier and more fun to create my own songs then spending the time learning other people’s music. As a result as a child I improvised a lot, especially watching TV. And now it’s my job!  It’s a second nature. I always have new idea for a new music piece.

Then how did you make the transition into composing for television? What’s that story?
FM Le Sieur: There was a Ridley and Tony Scott production in Montreal at the end of the nineties and I was asked to send a demo. I got the job and since then, I never stopped. I write for TV Shows and movies as well for both American and Canadian audiences and in France.

Looking back over the years, who have been some of your biggest inspirations in music — both to listen to and who influenced you?
FM Le Sieur: My major influences are different as a guitar player and composer. As a guitar player; the British pop and rock scene really influenced me as a kid. But soon my ears were also grabbed by composers like Stravinsky and Shostakovich, and of course film music of Ennio Morricone, John Williams, Maurice Jarre. Then at university I had a master class with Philip Glass and that’s really changed my whole view on film music and music composition in general.

Outside of music, are there sounds that you gravitate towards or are particularly drawn to?
FM Le Sieur: I enjoy manipulated sounds…. Strings who doesn’t sound like strings anymore, or guitar that sounds like anything but guitar.

Do you prefer to compose alone, or do you enjoy composing and scoring with others when working on a project?
FM Le Sieur: I write and arrange everything myself, and I also play all the instruments in the studio. I have a sound mixer I work with, but when it comes to creating the music, that is something I have done solo, thus far.

Outside of BEING HUMAN do you have any upcoming projects that you will be working on that we should keep an eye out for?
FM Le Sieur: The Original Soundtrack of BEING HUMAN will be released on January 8th on iTunes. After I finish composing the third Season of BEING HUMAN, I will write the music for a TV show set in Paris France. It’s a French Cop Show. Then I will do the score for a new Canadian movie… and than another TV Series for CBC. And then I hope a fourth seasons of BEING HUMAN.

Have you found that scoring and composing is the dream job you always wished for?
FM Le Sieur: Originally I wanted to be Jimi Hendrix or Keith Richards (laughs !). Seriously, when I was very young I wished to make my life in music. I loved music and loved musical themes in TV shows and movies. As a kid I used to mimic and sing along morning shows TV themes all the time. Composing came very naturally and I couldn’t dream of something better to do.

And, finally, what recommendations can you give to aspiring film and television composers?
FM Le Sieur: To be a successful composer, you must to love music passionately, as much as you like movies and TV shows. I strongly feel that the best thing for a aspiring composer is hanging out with cinema people. Find a friend, like a young director in University. When they make their first shorts; those people need you and you need them.

To hear more of FM Le Sieur’s piercing and haunting compositions for BEING HUMAN, tune in for the 3rd season premiere on Monday, January 14th at 9PM on Syfy.  (Also the digital soundtrack for BEING HUMAN was released January 8th and is currently available on iTunes)