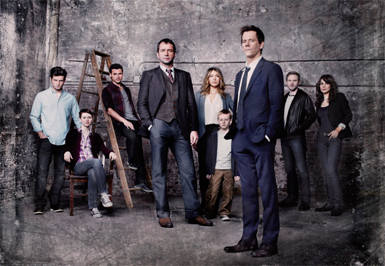 Let me just say this:  I loved THE FOLLOWING.  It offers some of the best which television has to offer in casting, storylines, suspense, drama, and complicated heroes and villains.  But, that being said, it is not an easy show to watch. It is, after all, a show about serial killers.  And we’re not talking about the warm and fuzzy kind from another well-known Showtime series.  In THE FOLLOWING, these killers are the kind that will give you nightmares.

THE FOLLOWING is about a cult of believers who worship at the alter of Joe Carroll (James Purefoy), a renown serial killer.  Carroll may be incarcerated and awaiting execution, but he is looking to make his mark on the world outside by encouraging his “followers” in their evil deeds.  Carroll has become the poster-boy for those of similar inclination and with his encouragement and approval, a terrible plan is set in motion.

Playing the hero in this dark drama is star Kevin Bacon, portraying FBI Special Agent Ryan Hardy.  He tracked down Carroll years before and is the man wholly responsible for Carroll’s incarceration.  To say that there is no love lost between them is an understatement.  Yet, oddly enough, there is a symbiotic relationship between these two men.  Every hero needs a villain to complete him; as does every villain needed a nemesis seeking to bring him down.  One cannot exist without the other.  For Hardy and Carroll, there lives are irrevocably entangled.  Hardy caught Carroll, but at a terrible price.

In the decade that has passed, Hardy has done everything he can to forget Carroll ever existed, while Carroll plotted ways to destroy Hardy pieced-by-piece.  THE FOLLOWING takes us back into their deadly game of cat-and-mouse, and viewers will never be exactly sure who is the hunter and who is the prey.  The stakes are high and the risk is real.  Death comes easily at the hands of a serial killer and his minions.  So do not get attached to anyone who may pop up on the television screen — death awaits each of them and you will not know when.

As dark and dire as it sounds, one may wonder:  Why is this show worth watching?  In one word, because it is “addictive.”  For better or worse, THE FOLLOWING has offered characters that are so compelling to watch that you will not be able to look away, and you won’t want to.  Kevin Bacon and James Purefoy as the lead hero and villain are riveting to watch.  Perhaps imbued by their natural chemistry together, it is fascinating watching them on screen.  Then fleshing out their worlds are equally riveting characters lead by a strong ensemble of Natalie Zea, Shawn Ashmore, Annie Parisse and Maggie Grace.   Natalie Zea portrays Claire Matthews, the ex-wife of Joe Carroll; Shawn Ashmore and Annie Parisse portray FBI agents Mike Weston and Debra Parker; and Maggie Grace portrays Dr. Sarah Fuller (the only victim of Carroll to ever get away).

To hear more about what to expect from THE FOLLOWING, be sure to check out these video interviews with executive producer Kevin Williamson, and stars Kevin Bacon, James Purefoy and Shawn Ashmore:

Give THE FOLLOWING one episode and you will see exactly what I mean.  You will be addicted too.  But don’t blame me for the nightmares, that blame rests squarely on the show.  Don’t say you weren’t warned! THE FOLLOWING premieres Monday, January 21st at 9PM on Fox (CTV in Canada).