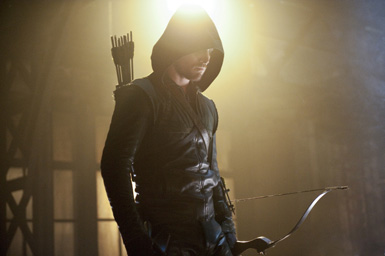 Heroes are carefully crafted from the brutal sands of time, and in the CW series ARROW, Oliver Queen was forged by five harsh years trying to survive on an island hunted and tormented by oppressors at every turn.  It steeled his resolve to return home and eradicate the evil festering in his home city so that those he loved would be free of such fear and domination. Fortunately for Oliver, he has a few key friends and family watching his back along the way. At last month’s WB Mondo International Press Tour, star Stephen Amell shared insights into his heroic characters, a few teasers about what’s upcoming on ARROW, and what TV Shows he’s addicted to on DVD.

Now that we’ve kind of seen some development as the relationships, the one that’s kind of taken the most fire is the Laurel and Tommy one.  How exactly is Oliver going to feel about them really pursuing this relationship?
STEPHEN:  In an ideal world, Oliver wants Laurel to be happy and wants Tommy to be happy.  I don’t think he holds grudges against either of them.  Specifically Laurel, though, he wants her to be happy.  Does he want it to be with Tommy?  Probably not.  But it’s not up to him to choose, to decide, to say you can be with this person but not this person.  He wants her to be happy and I don’t think he would ever stand in the way of that.  Unless, of course, Tommy messed up, in which case Oliver would probably take Laurel’s side.

What do you identify most about your character and what’s biggest challenge for you about your character?
STEPHEN:  The thing that I identified most with, actually, is Oliver is trying to please everybody while being very, very busy.  I’m shooting the show every single day, and I’m trying to please a lot of people, while also being very, very busy.  And I’m having the time of my life and this is a dream come true and these aren’t real problems that I have, but they are real scheduling issues.  So identify that. The way I differ most is the island version.  One of my favorite movies is “Children of Men,” and I thought Clive Owen and, to a lesser extent, although not to diminish the role, Jamie Foxx in “Collateral.”  I liked roles that are played without ego, so that’s ?? I really try to strip that away and that really takes me to different spots.

How long are you going to keep the secret about what happened really on the island, the writers?
STEPHEN:  We are really moving fast on the island right now.  A lot of stuff is happening on the island.  And I think one of the ?? small spoiler or tease, as the case may be ?? arguably, the biggest reveal in the entire series so far happens in episode 11.  It’s about the island.  And it’s not the end of the episode, the beginning of the episode.  It’s just a point in the middle of a conversation.  You have to pay attention. But if you pay attention and you hear it, you go oh, and it adds intrigue to the island’s story.

What made you commit to acting?
STEPHEN:  There was just a personal upheaval in my life where, in December of 2009, I was just ?? basically, I had been in long?term relationship.  I was no longer in it.  And I took a look around and I said what in my life makes me happy, and it was family be and friends and acting.  I think that some careers you can have where you can take your personal life and you can take your career and you can separate them.  I don’t think, for me personally, that a career in the arts ?? I think that it has to sort of meld together.  So it was family, friends.  And then acting really, really makes me happy.  So I decided to take an honest run in it, and it’s been going great since then.

A lot of people discover shows watching them on DVD as the new technology’s generated.  Have you been a fan of watching shows that way?  Do you like watching the extra features and stuff?  And what do you think about people who will later discover this show on DVD?
STEPHEN:  Well, I don’t actually own a DVD player, but I watch all my favorite shows on Apple TV now.  I love Apple TV.  I think it’s the best quality in terms of the picture resolution.  You get to watch it without commercials, which I don’t know if I should say too loud, which is really nice.  I do think that we are not better or worse but different than any other CW show, just in terms of our tone and in terms of maybe who we’re targeting as a demographic.  So I think that there’s a long tail for our show in terms of there are people right now who are not watching our show because they just haven’t considered watching a show on this particular network.  So the word of mouth has been really good.  Once we have a season in the can, as they say, I think a lot of people will discover the show on DVD.  I hope.

What shows have you caught up on DVD?
STEPHEN:  “24,” which is the single greatest show to watch all at one time in the history of television. It’s just fantastic.  I’m on hour eighteen and  I’ve got to keep going.  But a ton of shows.  So I watched THE WIRE that way.  I watched SOPRANOS that way.  And now I’m so busy ?? I have my shows.  I haven’t seen a single episode of DEXTER, of BOARDWALK EMPIRE, of HOMELAND, of SURVIVOR which is a television show that I have seen every season of, at least this season.  I have them.  They are waiting for me.  I have a wine cellar of television shows right now.  So yeah.

Is there any difficult part that you can’t handle yet about being famous, most of all because of the success of the show?
STEPHEN:  No.  It’s so far so good.  John Barrowman who’s on the show, he is sort of acting like a little bit of a mentor to me in terms of he’s been in this genre for a while.  He has a rabid fan base.  And he’s had some really good pointers how to deal with them.  Namely that if you are constantly trying to push people away, then all they’re going to want to do is clamor in and get close to you.  Whereas if you’re a little bit more inclusive, if you treat them more like human beings a little bit more, then when you ask for space, they tend to give it to you.  And I think that that’s kind of my modus operandi a little bit.  Its try to remain normal, try to be inclusionary.  And then, if and when I need my space, I’ll feel comfortable asking for it.

Is it kind of thrilling to be part of one of the DC universes of all the those things?
STEPHEN:  Yes.  Yes.

Do you ever read “Green Arrow”?
STEPHEN:  No.  I never read “Green Arrow” growing up, but I’ve read it now.  I don’t have a huge opportunity to think on the macro side of things.  Because I wrapped at 5 o’clock in the morning today and flew to Los Angeles, and it’s ?? it’s a full day of stuff and then it’s going to be dinner with friends, back to work.  We’re out in the jungle this week and then I’m on Christmas break.  I need some space and some separation from it to really think about it.  But really, it’s a thrilling experience.

With those teasers in mind, and with the promise of more high-stakes, more high-octane adventures and more villains to fight, ARROW returns with all new episodes on Wednesday, January 16th at 8PM on the CW (7PM on CTV in Canada)