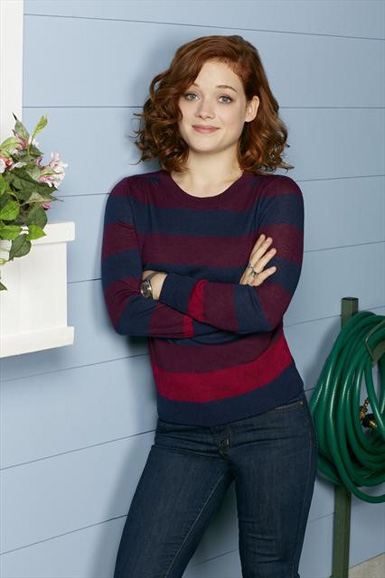 Rolling right through its rocking second season, SUBURGATORY is deftly and comedically handling the issues of birth parents, adoptive parents and the confusion teenagers feel in the midst of such big life issues.  When Tessa Altman moved to the suburbs with her dad George, little did they suspect that life would be so colorful, rich and heartily adventuresome as it is in SUBURGATORY.  In a recent press interview, star Jane Levy candidly talked about her role and her secret celebrity crushes that she would love to have on the show.

So what traits that are most like you that you share with Tessa?
JANE:  Most like me, my character and I, I guess I don’t know.  It’s a hard question.  It’s like they become ?? you know, especially for TV — you play this character for so long that things just start to bleed and you don’t know anymore.

Can you talk a bit about your character?  What’s going on with Tessa in this new season?
JANE:  Sure.  Yeah, Tessa is a Chatswinian now.  She’s no longer trying to get out.  She has embraced this as her new home.  And I think the biggest thing that goes with Tessa, especially at the beginning of season two, is she has this new interest in her mother in a way that she never did before.  She spent the summer in New York City, and she found some of her things and she’s just starting to wonder who is this person.  It was just huge.  And she meets her mom this season, and that was really a pleasure to discover, that relationship with Malin Akerman, who’s a really great actress.

What’s Tessa’s relationship like with her mom?
JANE:  Well, I think the story is still sort of open in a way that we haven’t finished shooting the season.  I don’t even know what’s coming up next.  But there’s been two main episodes where Tessa reunites with her mother.  And it’s sort of heartbreaking in a way.  It’s hard to explain.  It’s like a huge moment, meeting a parent that you never met before, and it doesn’t mean that everything’s falling apart or everything’s coming together.  It’s almost so big that Tessa doesn’t even know how to comprehend it yet.  But what’s interesting about the way that it’s written is her mom turns out to be this person, from the audience perspective, that you like, but you understand that she’s not necessarily the best person.  You like her, but you want to hate her.  And there’s something tragic in the way where she seems like a really cool older sister but someone who had a kid and just decided to leave it but now wants to be like a groovy mom in a way.  And what’s great about it is Tessa is so mature that she’s able to see that and it hurts a little bit, but she realizes that this isn’t like her dad who’s been with her whole life; this is somebody who left her, but she doesn’t resent her. I guess it brings her and George closer together.  But I don’t really know where it’s going to go from here.  We’ve left off Christmas episode that aired last week where Tessa says, “Thanks for having me, but I’m going to go back to my dad.”

What about fashion trends?  Is there like a particular look that maybe your character has that you also have adopted?
JANE:  Not so much.  Tessa kind of dresses like a weirdo.  I mean, that’s what’s great about her.  She’s her own person and she has her own style and she doesn’t feel the need to dress like anyone else. But I’m so much more comfortable in mine than Dalia who has to wear crazy 6?inch heels.  Is there such a thing as 6?inch heels?

If you could pick a love interest for Tessa, who would you choose?
JANE:  Well, because they have to be young, obviously.  But if you ask me, my celebrity crushes, it’s like, grossly, older men. I guess that would be fun. They’re so weird. I’m, like, embarrassed to admit them.  Okay.  So one of the only TV shows that I really love is TWIN PEAKS. Kyle McLachlan plays Agent Dale Cooper, and I love Dale Cooper, so I’m in love with Kyle McLachlan.  He could be my dad, so it’s really weird.  But I don’t know. My other celebrity crushes are just ?? they’re just bizarre.  And one, Michael Shannon, because he’s just, like, so tall and powerful.  Who else?  Viggo Mortensen.  I mean, they’re old enough to be my dad.  It’s weird.

Have you met any of them?
JANE:  Yeah, I met Kyle McLachlan.  And I couldn’t put words together.

Can you just talk about that you made a horror film, “Evil Dead”?  Can you talk a little about your experience?  Are you a horror fan?  Did you watch the first movies?
JANE:  I’m not necessarily a horror fan.  I just never really watched them that much.  I thought the script was really well written, and it was so different than what I’ve been doing on SUBURGATORY for six months that I thought it would be an awesome learning experience and a stretch for me as an actor.  And it was a really tough shoot.  My character gets tortured a whole bunch, so that’s how I was feeling.  But I’m going to see it next week, and I hope it’s good. It was filmed in New Zealand and it’s a very violent film.

More and more people are watching seasons of TV one home video/DVD.  Have you ever done that with a show and do you understand that appeal?
JANE:  Yeah, I love it.  I know plenty people and I’ve done it myself where you lock yourself inside for four days and you a watch a whole series.  It’s like watching a never?ending movie.  It’s great not to have to wait for the next season or the next week. I just love SEX AND THE CITY so I can watch SEX AND THE CITY until the cows come home.

What can you share about SUBURGATORY’s homage to HOMELAND?
JANE: Emily, our creator, is pretty in love with it.  So she’s not making fun of it. I don’t know if you saw an episode this season early on where at the end of the episode, Dalia goes to the garage and opens the Torah praying. I don’t know what that has to do with HOMELAND, but there’s going to be a couple of those things this season, if you’re a fan of both.

To see what more wacky adventures lie ahead for Tessa Altman in SUBURGATORY, be sure to tune in for all new episodes starting Wednesday, January 9th at 9:30PM (CityTV in Canada)