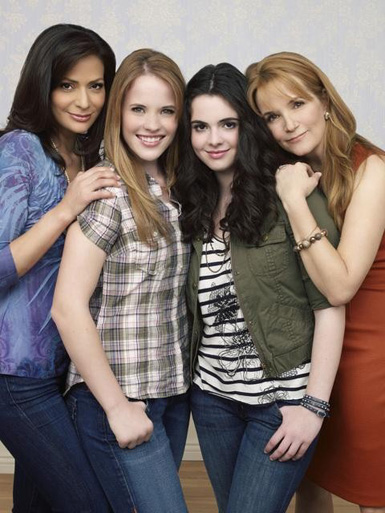 Continuing its inspiring portrayal of deaf life for a special co-mingled family who found out their teenage daughters had been switched at birth, the ABC Family series SWITCHED AT BIRTH will next be tackling an entirely ASL-based episode on March 4th. During a recent set visit, executive producer Lizzy Weiss and co-stars Constance Marie and Gilles Marini talked a bit about the upcoming episode and what lies ahead for Regina and Angelo. 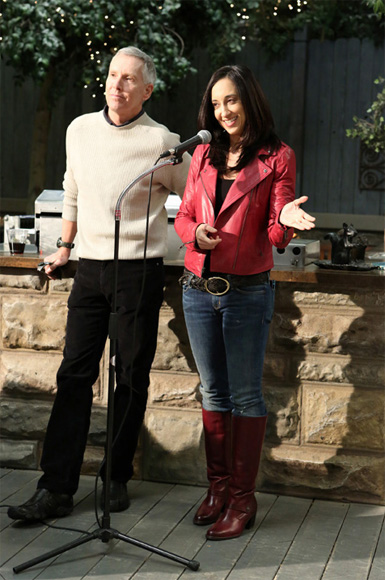 Creator/Executive Producer LIZZY WEISS
Will the upcoming March 4th episode be without any sound whatsoever?
LIZZY: No. Though I suspect a lot of it will be discovered in post where we’ll sit there in editing and say, “How about we play with the sound here? How much do we want it to poke through?” Katie’s character — we call her deaf, but the way she speaks, she is more hard of hearing — so we’re going to have some sounds that would peek through in that episode. A lot of deaf people have a spectrum, either high or low, and we’ll play with music and stuff. . It’s all kind of exciting. We grew up thinking that one is either deaf or not, but that’s not true. There’s a spectrum and that’s why when casting Daphne, we were comfortable casting Katie [Leclerc], even though she wasn’t the exact level of deafness we wanted Daphne to be. But you can’t exactly match that. She was fluent in ASL, she knew about deaf culture from her sister, so we felt that was within the spectrum for the character

What will be the focus of the entirely ASL episode?
LIZZY: We’re so excited about it. It features, of course, Marlee Matlin as the strong adult figure for these kids and we’ll have the parents and everyone will be signing the whole time, and Travis is a big part of it too. 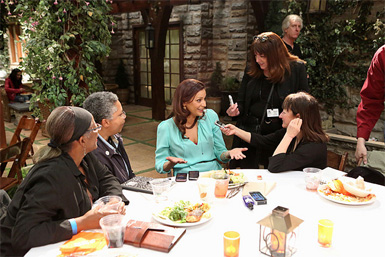 CONSTANCE MARIE
So what’s next for Regina as a career now that she cannot work as a hair stylist anymore?
CONSTANCE: The good thing about Regina is that she is constantly evolving. Because of her injury, and not being able to work, or to use ASL to talk to her daughter, and because of the baby situation with Angelo, she’s been pushed to the brink right now. Though I can say that I’m wearing jewelry from one of Regina’s new jobs — though I can’t say what it is. But Regina does evolve. I can say it will be in art realm. 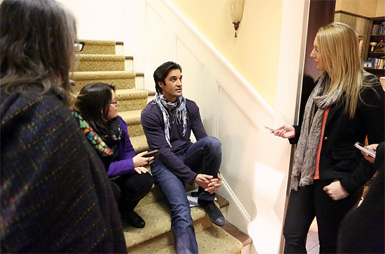 GILLES MARINI
How does Angelo fit into the rest of the season?
GILLES: It’s a much bigger role, with much more storyline, and a much more clever storyline. So I’m very excited. As you know, Angelo is trying really hard to get into Daphne’s life again, so he’s going to work towards learning more sign language, and I just got news that I’m not even allowed to share with my co-stars about what’s going on next. I told the writers, “Just keep surprising me like you’ve been doing.” ‘Cause there are like 16 writers sitting around a desk and they are doing an amazing job.

Have you been teaching your own kids sign language?
GILLES: I am, and I see them trying to learn from the TV screen from the show.

How is your own signing coming along?
GILLES: I’m very bad — and I’m a very bad liar, so I’m going to tell you the truth. (Laughs) No, it’s not that I’m bad, it’s just that my character has never had a chance to speak with it. But I can’t wait. For now, it’s just baby steps.

Do you see Angelo as a good guy or a bad guy? It’s hard for viewers to tell.
GILLES: I love that. I play this very over the edge, you never know if he’s going to one day turn into this pure bad guy or is he really trying to get together with his family. Though I kind of know where he is going or the character would be very hard to play.

Is there still a possibility of things working out with Regina and Angelo?
GILLES: That’s not going to happen now. There’s a baby on the way and everyone’s not thrilled about that.

So see more about what is going to happen with the increasingly complicated lives of Angelo and Regina, and their daughters Bay and Daphne, be sure to tune in for an all new episode of SWITCHED AT BIRTH on Monday, January 28th at 8PM on ABC Family (ABC Spark in Canada). Then mark your calendars for the special ASL-episode scheduled to air on Monday, March 4th. It will be a joyous treat, not to be missed!