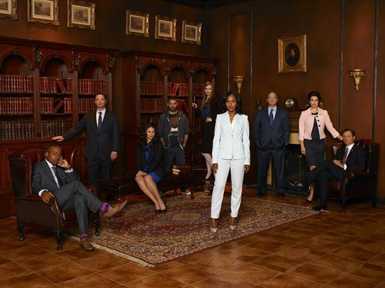 A conspiracy, a presidential shooting, an election-rigging, and illicit affairs – you name it and SCANDAL’s got it.  SCANDAL has become the “water cooler” show of the season and nobody can predict what crazy thing is going to happen next.  Fortunately, during the recent TCA set visit, cast of SCANDAL took a few minutes to share a few teasers about what Fitz, Mellie, Cyrus and David and what may lie ahead in their collective futures. 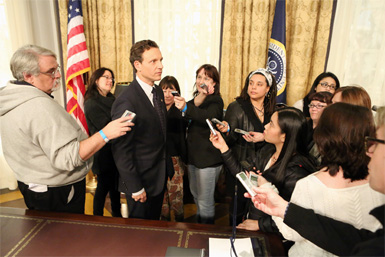 Tony Goldwyn
In this last episode, we saw Fitz trying to prove that his mental faculties were intact, and then when asked by Millie about the one thing he wants, he asked for a divorce.  He’s probably not going to get that, but what else would he really want at this point?  Now that he’s had this “wake-up call” in his life.
TONY:  Olivia Pope, obviously.  He’s kind of achieved a kind of clarity with almost losing his life and he’s done playing games.  He sees there’s like an opening and he uses it to just speak the truth. I think Fitz is going to become very insistent on that in every department.  He’ll approach work in the same way, leadership, everything.  It just going to be very straight-lines and not accepting all the political compromises, machinations, and all that.

So he will be still pursuing his one true love.  But will he ever be able to forgive Olivia if he ever finds out how she got him in office?
TONY:  I don’t know that answer to that.

You’re probably terrified to find that out.
TONY:  Yeah, but that’s an important question.

Because everyone around him has kind of conspired to put him into office, when he though he had earned it.
TONY:  It’s like Cyrus says, as a human being, no one is perfect and least of all Fitz. But his moral compass is really important to him and particularly in this office.  And Olivia, he puts her on a real pedestal in that regard.

So he’s hoping he never finds out then.
TONY:  I’m hoping! (Laughs) 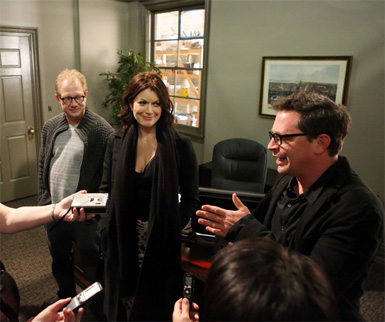 Josh Malina, Jeff Perry, Bellamy Young
Did you have an inkling when you first accepted your roles that you would become the ambiguous bad guys in the show?
JEFF:  No, no.  I thought for about two episodes, “I think I’m the moral center.”  Then with great rapidity, it was like, “Nope, you might be a Iago or Richard the Third, but moral center has gone by the wayside.”
JOSH:  I would argue that I’m the only true hero, both as a person and as a character.  There’s a lot of talk about the “white hat” early on in the first season and I think now I’m the only “white hat.”  Everything else is fifth-shades-of-grey.  But my hat remains white.  I believe.
BELLAMY:  (Laughs)  Hey, I only had two lines in the pilot so I’m just happy to still be standing.  I was recurring last year and started very small.  I thought it may be a three-episode arc, but they just kept writing me more complicated stuff.  Nobody gets off easy.  Everyone is so nuanced and so difficult. It is just so thrilling to play. My part has escalated and escalated, and I’m happy I get to be a part of it. 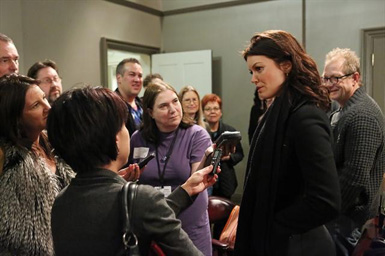 Bellamy Young
How do you feel about Mellie?  And are we supposed to feel sorry for her?
BELLAMY:  Mellie is very devoted, both to her man and to her life.  I think for her identity, the two things are very intertwined.  So she has a very specific idea of how things should be run and how things should be done, and she’s coming from a very honest place about it. She’s never comported herself to be anything else.  She’s been very clear with Fitz and she’s been very clear with everyone.  Everyone’s aware of Mellie’s agenda.  So I think she’s told herself that she’s doing the best she can.

There has been some debate whether Mellie is actually in love with her husband at this point in her life.  Is she really in love with Fitz?
BELLAMY:  I don’t have any doubt.  Shonda could tell you something different, but I’d say to any depths she’d take a bullet — but she didn’t, did she? (Laughs)  It’s just hard to see the person you truly love find his true love with a different person, years into your marriage.  We’re meeting them at such a sad, difficult moment, but there’s years and decades of marriage where they worked so well as partners before he discovered it wasn’t love.  I think for her it really, really is.

How do you think Mellie will react to Fitz’s suggestion of divorce?
BELLAMY:  Mellie is not going to go down without a fight.  He can think he want a divorce, but she will fight tooth and nail to pull that idea out of his head.

Does Mellie see either Cyrus or David Rosen as a natural ally at this point?
BELLAMY:  Between Mellie and Cyrus, there is a long history of fraught allegiance and betrayals, but certainly we know that we can work well together and that when the steamroller has to move, we can really lay some pavement over bodies, over issues, or whatever.  But, as to David, who knows.

With those teasers in mind, and with everything rising to another boiling point in the Olivia-Fitz-Mellie love triangle, be sure to tune in for an all new episode of SCANDAL entitled “Truth or Consequences” on Thursday, January 31st at 10PM on ABC (CityTV in Canada).