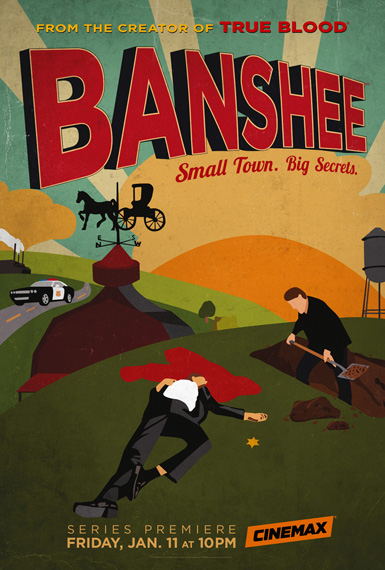 In this week’s episode of the Cinemax series BANSHEE entitled “Half Dead Is Better Than All Dead,” Sheriff Lucas Hood (Antony Starr) finds himself caught in the cross-hairs of fate.  As if being caught red-handed with a priceless painting is not enough to land him back inside a penitentiary, imagine how thorny things get when Cole Moody’s (J.D. Evermore) hoodlum brothers come looking for some painful payback.

The name Lucas Hood may be merely a convenient moniker for the opportunist thief, but as he soon learns, there is real power behind the badge.  It gives Lucas the freedom to pursue justice as he sees fit and virtually no one challenges him.  In the pilot, Lucas shot and killed Cole Moody just as Moody was about to kill the local crime boss, Proctor (Ulrich Thomsen).   Then in the subsequent episodes we saw Lucas take on the illegal drug trade preying on teens at raves, which tragically left the state senator’s son dead; and then in last week’s episode Lucas delivered spectacular beat-down of a pro-fighter who had brutalized a local girl.

But Lucas’ unorthodox methods for tackling crime and thwarting evil-doers has put him on the power radar in Banshee.  Proctor is anxious to have the indomitable sheriff on his payroll and the town mayor and district attorney are determined to use Lucas as the weapon to finally take Proctor down.  Thus, when hard evidence falls in Lucas’ lap to put Proctor away, it becomes a showdown of wills between Lucas and Proctor – with an unexpected twist when fate comes a calling.

As Lucas is about to learn, it pays to have friends watching his back in all his endeavors, both his criminal side-jobs and his efforts to cleanup Banshee.  For a hero is only as strong as his allies.  Being new to town, friends are in short-supply, but Lucas is quick to align with those he senses he can trust – but should he?  Just who will be there when he finds himself boxed in, on the run, and caught in a trap?

With his ex-partner in crime, Carrie (Ivana Milicevic) toying with the idea of turning Lucas over to her father to buy back her own freedom; and his partner-of-convenience Job (Hoon Lee) similarly on the run from Carrie’s father, Rabbit (Ben Cross), allies are in short supply.  In addition, is Sugar (Frankie Faison), the ex-prize fighter turned bar owner, truly one that he can turn to when things heat up?

Yet Lucas’ instincts have kept him alive this long.  He has evaded Rabbit, survived 15 years in prison and found a way to hide-in-plain sight in a town riddled with crime problems.  Banshee is the perfect hiding place and a perfect fit for someone of Lucas’ particular skill set.  But just how long can this masterful con game continue before someone figures out that Lucas is not a real cop?  That clock is ticking as loud as a timebomb.

To see what new tricky situation Lucas finds himself thrust amongst this week, be sure to tune in for an all new episode of BANSHEE on Friday, February 1st at 10PM on Cinemax (11PM on TMN in Canada) — and for those who have not heard the good news, BANSHEE was just renewed for a second season by Cinemax.  So be on the lookout for even more adventures of Lucas Hood in BANSHEE  in 2014 after this season concludes on March 15th.