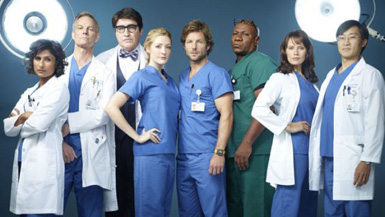 The new medical drama from David E. Kelly may be innocuously titled MONDAY MORNINGS, but it is anything but benign.   In fact, it aims right for the jugular with storylines intent on piercing even the most hardened of hearts.  MONDAY MORNINGS seeks to tell the internal trials which doctors face from their peers after a medical misstep,  while providing a human face to back-dropped the problem from which it stemmed.

Co-created and executive produced by world-renown neurosurgeon Sanjay Gupta, the stories of MONDAY MORNINGS resonate with authenticity and humanity.  The medical world may appear cold and clinical from the outside, but inside the operating rooms, in the waiting rooms, and in the doctor’s offices, life and death decisions are made each day.  Many result in a favorable and happy ending.  But then there are those decisions that make every doctor and surgeon question whether something more could have been done.  That is also where the Monday morning Morbidity & Morality (M&M) sessions come into play.  Those meetings ensure doctors hold each other accountable for risky decisions that resulted in adverse consequences.

With an all-star cast of Jamie Bamber, Jennifer Finnigan, Alfred Molina, Ving Rhames, Keong Sim, Sarayu Rao, Bill Irwin and Emily Swallow, MEDICAL MORNINGS shall tug on the heart strings and yet be heart-crushing, simultaneously.  But for those who make the life-and-death decisions, making hard decisions is their job.  They were trained to make the hard calls; yet living with those decisions can be painful, and accountability can both haunt and destroy.  However, for every bad call, there are thousands of decisions that result in a happy-ending and those are to be celebrated as well.

The thing to remember watching MONDAY MORNINGS is that while there will be episodes with sad outcomes, there are also episodes with joyous outcomes.  And, by far, the best part of the show will be getting to know the characters populating the world of Chelsea General Hospital; for each offers a unique way of looking at medicine, ranging from outrageous confidence to preposterous hilarity.  Just like patients come in all shapes and sizes, so do doctors.  Each has a temperament or personality that shines differently depending on the prism from which the light of medicine shines.

As long-time fans of Alfred Molina and Ving Rhames shall recognize, their characters cannot be categorized into a box description.  They shall be imposing, determined, inspiring, and yet somehow offering their own quirky take on what it means to be a doctor.  Lending their unique presence, they set the standard to which the other characters shall aspire to emulate.  Yet even with such strong presences in their midst, Jamie Bamber, Jennifer Finnigan and the rest of the cast find a way to shine on their own.  Discovering each of their quirks and the reasons we shall fall in love with each of them shall be a fun journey.

To start that journey, be tune in for the premiere of MONDAY MORNINGS on Monday, February 4th at 10PM on TNT.