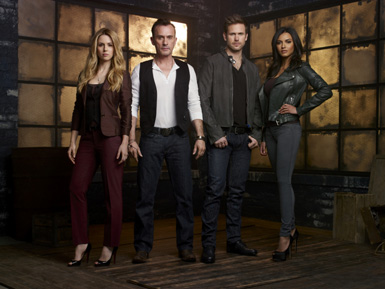 It’s February and the month of love, yet there is an interesting trend of spine-chilling thrillers filling-up the TV landscape these days.  One of the funnest thrillers of the season is the CW’s new series CULT.  While promising that there is nothing supernatural about it, the show offers a refreshing look at how every day things can be scary and terrifying all on their own.  Trust me on this: you’ll never look at buttons the same way again.

So here are five reasons why we think CULT will become one of you new favorite TV addictions:

Cool Cast
Helming the quartet of stars featured on the show, Matt Davis (formerly, Alaric on THE VAMPIRE DIARIES fans) portrays Jeff Sefton, an investigative reporter in search of his missing brother.  Matt describes Jeff as, “Somewhat cynical in the beginning and the more his mind relaxes around the possibility that there is a conspiracy of some sort being played out through the television show, he begins to accept it.  And the more he accepts, the deeper he gets into it.  It does change him.  It hardens him a little bit.  It also focuses his determination to get his brother back.”

Joining Jeff’s quest to unearth what is really going on in the allegedly fictional “Cult”-world is Jessica Lucas, portraying Skye Yarrow, who is investigating the show for her own reasons.  Jessica says that Skye is “tenacious” and “she’s just very determined and who has a very specific goal in mind. Once she’s set her mind on it, she’ll stop at nothing to get answers.”  Jessica also explained, “I think in the pilot episode you’re not sure what [Skye’s] intentions are.  She latches onto Jeff so easily. But there is a reason that will be revealed in the next episode.  She’s actually been looking into ‘Cult’ for a while and you find out why.  I think once you know her true motivations, it makes sense.”

Then on the flipside are Alona Tal and Robert Knepper (infamously remembered as T-Bag from PRISON Break), portraying the actors, Marti and Roger, who also portray the fictional “Cult” TV characters of Kelly Collins and Billy Grimm.  In Robert’s own words, the key to  Billy Grimm’s cult-addictiveness is, “his eyes and his voice.  I remember reading years ago that when John Kennedy walked into a room, everyone turned to watch. And that’s what I tried to tap into with Billy.” Robert also feels that Billy Grimm commands attention “effortlessly.”  He described it as, “It felt like I was channeling Robert Mitchum for awhile.  There is something really strong about him without forcing it too much.”

As for the mystery of CULT, Robert described it as, “The simple answer is that there are so many different layers of the show.  There’s the simple story of the brother trying to find his younger brother.  There’s the idea of:  Who is the real cult?  There’s cult on the inside-show, where Billy Grimm lives; and then there’s the outside-show where if anyone gets close to finding out the truth, people start disappearing.  But by whom?  Someone who is in a cult-like organization?”

That’s right folks, CULT offers a look at a show-within-a-show — and Jeff and Skye think that the actors of this fan-obsessive “Cult” TV show may or may not be involved in an actual fan-based cult that may be responsible for Jeff’s brother’s disappearance.

Spooky Story
CULT is not your average missing person show.  It explores the rabid fandom that arises when a popular TV show grows outside of the confines of a television box.  When fans are that obsessed, they seek to make a show real in their world and suddenly the lines between fiction and reality become blurred.

The spookiness comes from wondering who may be acting out the “Cult” world unbeknownst to everyone else.  So guessing who is playing the game and who is an innocent bystander is half the fun.  Plus, if Marti and Roger are not in on the fan cult, who is pulling all the strings behind the scenes? And who is the real enemy luring Jeff and Skye into a deadly web of deceit and illusion?

Robert Knepper explained it as, “The first season is to establish the inside-show and follow Jeff’s story in going after his brother.  You have to remember, it’s all pretty much a secret.  They don’t want the network to know or anyone to know, as the network may be culpable with, ‘Are we promoting a show that is promoting violence?’  But that is all going to come to a head and explode.”

Catchy Clues
One of the catch-phrases used right off is:  “Well, hey, these things just snap right off.”  You’ll be as creeped out and perhaps more than a little intrigued the first time you see how this particular phrase is used in relation to some of those who have disappeared.  CULT knows its audience well and uses lots of key words and visual aids to keep viewers guessing about what is real and what may be clues to what is really going on.  It invites the clever and observant fans to play along with them.  In the era of Easter-eggs, it helps to give viewers a little more if they pay attention to the clues.

Double the Fun
A show-within-a-show is a hard story to tell because it asks viewers to believe in two different worlds, the world where the core characters live and the world where they pretend to be other characters in a TV show.  But with the characters of Jeff and Skye being our heroes in the real world following the clues both from within the show and outside of it, it makes it easy to follow and a lot of fun.  It’s the ultimate mystery story to unravel and solve.

Plus, for Alona and Robert, it is an amazing gift to be able to portray two divergently different characters within one show.  It also keeps the story fresh and provides for an abundance of new characters to get to know each week.

Highly Entertaining
In short, CULT is just fun.  It is a show that allows the viewers to play the “Cult” game with them as they unearth clues and try to solve their mysteries, but with real stakes.  The “Cult” fans are true believers and they will do anything to protect the world they have created.

Matt Davis summed it up perfectly when he said, “It really kind of explores the power of television — it’s ability to control people.  The rabbit hole that this show takes the audience down is a deep and twisted labyrinth of strange unfolding mysteries that all revolve around the cult of television.  How that plays out specifically? You’ll have to watch.”

To see the premiere of CULT and all its spooky mysteries, be sure to tune in on Tuesday, February 19th at 9PM on The CW (CTV Two in Canada). Find out who is pulling all the strings and making all the bodies disappear.