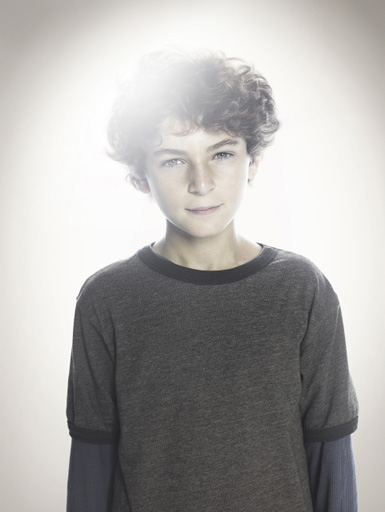 Perhaps one of the toughest jobs in Hollywood is one where the actor doesn’t get to say a word.  Yet extraordinarily, the young actor David Mazouz manages to convey so much through facial expressions and body language in his scenes that one never doubts what he is thinking or feeling.  In the series TOUCH, David has the auspicious role of co-starring with Kiefer Sutherland in scenes where David’s character Jake Bohm does not say a single word.

But in TOUCH, the story of Martin and Jake Bohm has captivated viewers who are intrigued with the journey of the father and son as they play pawns in a master game of destiny – or perhaps as David suggests, Jake is more like the puppet-master directing their lives for a grander purpose.  For the theme of TOUCH is recognizing that through mathematics and numbers how each and every person on the planet are interconnection.  It’s like seeing “the Butterfly Effect” each week as small movements set off a chain of events affecting so many lives – and usually for the better.

In a recent exclusive interview, David Mazouz candidly shared what it is like playing the omniscient Jake and where Jake’s journey will lead him this season in TOUCH.

What has impressed you the most about the second season so far?
DAVID: It’s about the relationship between Martin and Jake, and that it is getting stronger, which is really cool.

This season has gotten more action-packed, how has that been for you as a young actor?  Has it been exciting?
DAVID:  Yeah, definitely. Like when I’m reading the scripts, I’m on the edge of my seat the whole time and I think that the audience that is watching this season will be too.  It’s just really fun.  It’s so action-packed that the audience will just be wanting to see more.  I was asking the AD’s for the scripts in advance because I wanted to read them so badly because it’s so good.  I really like that, all the action-packed stuff and where everything is going.

Are you being allowed to participate more in the action, opposed to just being in the scene?  Are you allowed to do stunts of your own yet?
DAVID:  (Laughs)  No, not really.  I want them too, but they’re not letting me.

Last season, the questions were about “who is Jake and how is he involved in the mystery?” This season has made Jake more of a target and he’s in danger.  What does that feel like for you?
DAVID:  It’s cool. I just love the scripts and where they are going.  I think that all the action-packed stuff is really coming from all that danger that’s happening.  It’s exciting ’cause there’s this evil power that wasn’t there before in the story, ’cause in the first season it was really about Jake and Martin connecting with people and making people’s lives better.  But now it’s about protecting themselves while making people’s lives better — and that’s really cool.

Have you insisted on having a bullet-proof vest if the show is going to keep making Jake the target?
DAVID:  (Laughs) No, but I think he deserves one.

Is there going to be a point where we see Jake and Amelia work together a little bit?
DAVID:  Definitely.  Jake and Amelia are actually connecting through this inside-the-head type of thing a lot this season.  They try to find each other in the beginning of the season, and they try to work together to make a lot of the things happen.  Even though they are not with each other physically, they have the inner-communication (kind of like telepathy) and they kind of speak to each other like that.  A lot of the things that happen are because of them working together.

There’s been a rumor that the producers put out there that Jake may actually speak this season, can you talk a little bit about that?
DAVID:  I don’t want to give too much away.  But I will say that Jake does evolve a lot in the second season.

Is that exciting for you as an actor, seeing that kind of growth for your character?
DAVID:  Yeah, ’cause Jake in the first season, he would once in awhile smile, but really for the most part he was blank-faced without having any emotion and just kind of there, writing things down and rocking back and forth.  But this season, you’ll be seeing him doing things that he would have never done in the first season.  So that is really cool as an actor.

It was surprising to see how open Jake was to meeting new people, like befriending the girl at the pier and going on rides. He just seemed to be willing to experience more and be more involved in life.
DAVID:  I think the whole moving to L.A. kind of changed who he was a lot.  ‘Cause if you think about it, the time period between the first and second season is immediate.  But I think that car drive from New York to L.A. was really something that bonded Martin and Jake, and Jake evolved a lot during that car ride.

What do you think was the emotion Jake experienced when he reached out to touch his dad’s hand like that at the end of the first season?
DAVID:  It’s the love and trust between them.  Because Martin loves Jake and Jake loves Martin, and maybe he can’t show it like a regular kid would show to his parents of how he or she loves them.  But Jake definitely loves Martin, and Martin loves Jake — or he wouldn’t be such a great dad, doing all this stuff, following all these numbers, which is just a one out of a million chance of actually being something true.  For Jake to write down a number and it happens to be the same.  So it’s obvious that Martin loves Jake.  But I think their relationship goes to more trust and love.  They are trusting each other more.  Like in the first season, Jake wasn’t sure if his dad would keep him when a lot of people were telling him not to.  But now Jake knows that he can count on his dad.  So I think he trusts him more.  So I think those two elements are really what’s going on.

For you, what do you enjoy most working on TOUCH?
DAVID:  That’s a hard one ’cause everything is so awesome. But I think the people would have to be  the best because the cast and crew, everybody is just fantastic. Like Kiefer [Sutherland] bought me a guitar for my 11th birthday last year, and he’s a pretty good guitar player.  He taught me how to play a little bit.  He also taught me chess and a little bit of boxing. Then my wardrobe person on set is kind of like my life-coach, basketball coach and friend.  He’s taught me a lot of pointers.  Then the make-up person on set, we have a secret handshake together and every episode we add another step.  In fact, we took a video of it and it’s now almost two minutes long.  And the props guy, he is awesome.  Since we’re on location a bunch in our scenes, he goofs off with me and shows me all these things, like we made paper airplanes and we went to the top of the stage where they hang everything and we threw them down, and we had a contest about whose when the farthest.  Then we had dodgeball fights.  Also my studio teacher is amazing.  She’s so awesome. She communicates so much and teaches me so many things that I’m not even learning in school, and I always get ahead.  And we always ride around with our bikes around the stage at Fox.  It’s all just fun.  I think it’s just awesome.

Then if you wanted to tease a little bit of what’s upcoming for the fans, what can you share?
DAVID:  Just that there’s a lot more suspense, a lot more action-packed, with a lot more characters.  Everything gets a lot more complicated, a lot more serialized, and that’s really cool.  So I think the audience can look forward to being on the edge of their seats this season — and that’s fun.  So just keep on watching!

To see exactly what David and Amelia are cooking up for everyone and if they can out maneuver the AsterCorp villains, be sure to tune in for all new episodes of TOUCH as they airs Friday nights at 9PM on Fox (Global in Canada).