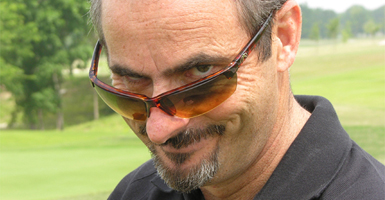 Recently discovered at this year’s Television Critic’s Association and immediately charmed by the comedic finesse with which David Feherty commanded even the most jaded of journalists, it impressed upon us at TheTVaddict.com that comedy is reaching across television boundaries and taking foothold on networks such as the Golf Channel.   The FEHERTY show is a hilarious look at famous personalities, some in the golf-world and many from the broader entertainment world at large.  The clips of David Feherty’s interviews with Samuel L. Jackson and former President Bill Clinton were glorious enticement enough to give this unexpected show a second look.

As any comedian can tell you, performing comedy is hard.  Thus, it is an elusive quest to find just the right comedic voice and material to work with that will strike people’s funny-bones.  Yet cleverly enough, David Feherty seems to have been born with the gift of comedy in his bones.  More clever still was the Golf Channel snatching him up and showcasing his Scottish humor to everyone’s delight.

In a recent press call, David Feherty talked about his luck falling into his career and what other big name celebrities he will be chatting with in this next season of his show FEHERTY.

What do you have say for the success of your series in that it reaches an audience beyond the boarders of golf and sports?
DAVID FEHERTY:  I’m pretty dumbfounded to be honest with you.  I didn’t really didn’t think it would go two seasons, never-mind three.  I’ve been very pleasantly surprised by the reaction to it and the fact that I still have a job.

How about season three?  What are you looking forward to in season three?
DAVID FEHERTY:  Well, season three, I’ve got Jack Nicklaus as an opener, and that’s a challenging interview.  People might ask:  Why did you wait until the third season before interviewing the greatest golfer of all time?  Well, I think I wanted to climb a few smaller hills before I tackled Everest.  Because what do you ask Jack Nicklaus that he has not been asked a thousand times before. The first interview that I ever did was Lee Trevino, and I really, really wanted to have Lee first because he does so few interviews and I thought it would be something special.  But to get Jack and to get him in the kind of mood that I got him in, I think people will see a different side to him and I’m really looking forward to seeing that one.

We’re curious to hear about your experience with Bobby Knight and what that was like. How found him as an interview subject.  He had some kind words about you, so you must have done a good job on him.
DAVID FEHERTY:  Well, I’m not sure that I knew what to expect with Coach Knight.  There’s so much been written about him, and you always have a perception of how someone is going to be.  I really try not to form hard perceptions like that.  He came off as one of the all?time great teachers I think I’ve ever been involved with or ever had the pleasure to meet.  The fact that he went 29 years at Indiana and only had four seniors I think that didn’t graduate is an astonishing achievement beyond anything in sports.  His kids got an education.  Just interviewing the man, it was easy to see why.   He has a tremendous presence and an aura about him that you’re in the presence of somebody special.  It’s that sort of intangible kind of a feeling that you get whether it’s Jack Nicklaus’s hand that you’re shaking or a Bill Clinton or Nelson Mandela.  They are special people that have sort of a gift with communication and those are the great teachers, and of course, Bobby communicated in a very direct way for the most part.  I kind of like that.

You talked about with Nicklaus and how you now see a different side of him.  How do you go about disarming somebody in an interview when some of these people are not the easiest people to open up?  Aside from being you, what’s kind of your strategy as far as going into an interview and maybe trying to get something a little different that people have not seen before from an individual?
DAVID FEHERTY:  Well, I think you hit it on the head there.  My strategy is that I actually have absolutely no strategy.  I’ll forget what the question was halfway through it and my subject has to help me out.  I think it’s kind of equal parts that they feel sorry for me. I need help in what I’m doing.  I’m honestly not very good at this.  I think in a strange way that that’s one of my strengths; that it doesn’t bother me that I’m not, and people can identify with that; that they might not be very good at it either or if they have thought about it. It’s odd. I think they feel comfortable when they are with me and they know that I am not going to burn them or ask them any questions that haven’t been asked a thousand times or have been asked a thousand times before.  I’m not interested in that.  I’m more interested in the person.   And Jack’s funny.  People don’t think of Jack Nicklaus as being funny, and he’s a grumpy old man in a lot of ways.  But he has a wealth of knowledge ?? between him and Barbara, their sense of family and the grandchildren and everything that sort of comes with the Nicklaus name has a really high quality, how you would like your own to be.  And it’s the humor, behind the scenes at the Memorial or in the commercial for CBS ?? wearing my CBS hat; he loves it.  He loves giving people a hard time, and refusing to play with record or taking the piss out of people, that kind of thing.

Did you think when you started this process with your show that it would be as big a success, and you would have so much fun doing it?
DAVID FEHERTY:  I thought I would be doing ten or 12 episodes a year and that would be it, and I wasn’t sure really how it would take off.  The show is sort of evolving along the way.  I may get some personal elements into the show, as well instead of just purely an interview show.  I don’t really know what direction it’s going.  I have also sort of followed the path of least resistance ?? not always, but since I’ve sort of got better.  I’m happy to go wherever it takes me, and it’s taken me to Spain.  I was almost going to China a week ago but thankfully I got rid of that one; this time of the year, I’m doing enough traveling.  But I really didn’t think as many people would like it.  People seem to genuinely like the fact that they see it than maybe a different side of the people or they might have had a different opinion.  That’s what gives me a kick.  To show someone the Sergio Garcia I’ve known for ten or 12 years, or longer than that, actually, since I had to help him with his math homework, and it’s nice to be able to do that.

It’s funny, from your past interviews, the Sergio show and the Bill Clinton show stuck out to me as two of my favorites.  Do you have any favorites?
DAVID FEHERTY:  Those two would be among them, but Greg Norman has been a friend of mine for 30?something years.  And just meeting Bill Russell was one of the great moments of my life, to have a couple of days with him and keeping in touch with him.  And what an extraordinary human being, what he went through and just the enormousness of his kindness ?? the aura that he has, you’re with greatness when you’re with Bill Russell.  I think that’s my favorite.

FEHERTY debuted in June 2011 and became the most watched premiere of any Golf Channel series in the 17?year history of the network. David Feherty interviews people from all walks of life, including personalities from Hollywood to politics to sports.  But the one thing they all have in common is that they share a passion for golf.  Some of his past interviews have included: former President Bill Clinton, Donald Trump; as well as actors Samuel L. Jackson and Don Cheadle; Hall of Fame athletes Bill Russell and Charles Barkley; and golfers, Tom Watson Greg Norman, Rory McIlroy.