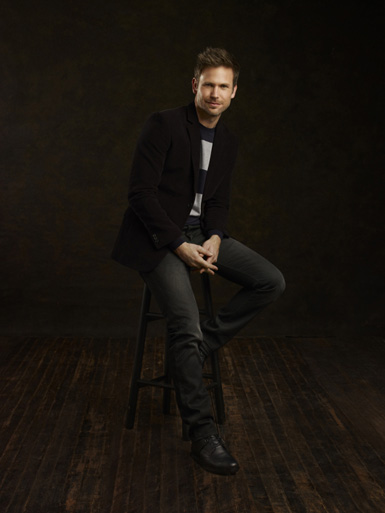 Now that viewers have had a chance to get to know Jeff Sefton and the mysterious world he has stumbled across in the new CW series CULT, this is the perfect time to hear from star Matt Davis about his speculations and teasers of what lies ahead.

So where is the world of CULT taking us? We know your character goes off in search of his missing brother and that takes him to some weird places.
MATT: It does. It really kind of explores the power of television — it’s ability to control people.  The rabbit hole that this show takes the audience down is a deep and twisted labyrinth of strange unfolding mysteries that all revolve around the cult of television.  How that plays out specifically, you’ll have to watch.

Will Jeff have a chance to find his brother this season?
MATT: You have to watch. That is the driving motivator for the majority of the show, for sure.  Whether he finds him or not, remains to be seen.  I know that the show poses a number of questions in the first couple of episodes and it leads the characters through this sort of carnival ride of craziness to its conclusion, which then answers the question but then raises bigger ones for the next season.

Does Jeff have difficulty distinguishing between realities and what’s fiction and what’s not fiction?
MATT:  I think so.  Jeff is somewhat cynical in the beginning and the more his mind relaxes around the possibility that there is a conspiracy of some sort being played out through the television show, he begins to accept it.  And the more he accepts, the deeper he gets into it.  It does change him.  It hardens him a little bit.  It also focuses his determination to get his brother back.

So he drinks a little bit of the Kool-Aid?
MATT:  A little bit.

How does that feel for you as an actor to portray someone who is driven by his desire to rescue someone, and yet gets caught up in this massive conspiracy?
MATT:  It feels very familiar.  It was cool.  That’s what I really liked about this show. It was really the first thing to come along that fit my sensibilities, my taste and it was still part of the CW family, which has been so good to me and so gracious and kind.  So it was great to work with the same people on a new model of show.  So for me the whole experience was really fantastic on all dimensions, as an actor and as being someone who is a lead on a show. The whole experience was great.

‘Cause CULT does cross the lines of reality and fiction, did you ever feel that happening for you?
MATT:  It does.  It is a very “meta” show and at the end of it I did become slightly paranoid ’cause I thought to myself, if I was producing this show, I would put cameras and microphones in the actors’ trailers and in hair-and-makeup.  Like I would walk my dog sometimes and I would see people who were inadvertently dressed like Billy Grimm with a white shirt and a leather vest on and I would just do double-takes.  It did begin to distort your sense of reality.

Did you ever run into Robert Knepper and go, “Oh wait! Who are you now?”
MATT:  (Laughs) No.

He’s such a friendly guy.
MATT:  That’s the thing.  He’s not like his character at all.

He plays such great duality within the two characters he plays.
MATT:  He really does.  He had a lot of fun things to work with on the show.

What do you admire the most or appreciate the most about your character Jeff so far?
MATT:  I appreciate his determination to get his brother back in spite of the cost, in spite of what he loses, and in spite of his sanity.  I think his character is such that his family matters, that’s all he has left.  And in the process he meets Jessica’s character Skye and it forces him to look at things that he may be did not want to look at, and in the process — I can’t talk about the journey without giving certain things away, but I appreciate his determination and his focus.

For you, what are the funnest kinds of scenes that you get to do on the show?
MATT:  The great thing about the show is Jessica Lucas and I had most of our scenes together and I absolutely love Jessica and that was always a pleasure.  The other thing that I really noticed about the show was that all the guest-stars were really, really good.  There was a strong talent pool up in Vancouver and everyone just showed up really prepared and just did great work.  So I always looked forward to what the guest-stars we had and doing scenes with them as well to keep it fresh and change it up.  All in all the whole creative experience and the whole dynamic of it was really interesting.  No matter what happens with the show, it’s been a success for me.

Like your former show THE VAMPIRE DIARIES, there seems like there could be the possibility of big stunts.  Has CULT asked you to do a lot of physical work yet?
MATT:  Yeah, we a couple stunts here and there and had some fun with that.  There was some stunt driving, some explosions, guns being shot, and all kinds of mayhem running around.  So that physical element was always fun.  Then I loved the suspenseful elements of it too.  That’s another thing I like about the show and that’s different about than say VAMPIRE DIARIES, it not being supernatural makes it psychological.  That psychological element to me is always much more scary and fun to play because it could be real.  It’s more tangible.

Can you turn that psychological-element or paranoia off when you go home?
MATT:  (Laughs) No.  It follows me everywhere.

Do you find yourself looking at cameras really suspiciously?
MATT: I do.  That’s what’s so funny about the show for me, like I am inherently a conspiracy-theorist.  I believe in the unseen forces of the occult, so to be on this show dealing with these kinds issues for me is delicious in its synchronicity and certainly parallels my own personal perspectives.

CULT currently airs Friday nights starting March 8th at 9PM on the CW. Join in the fun as it asks:  are you a believer?