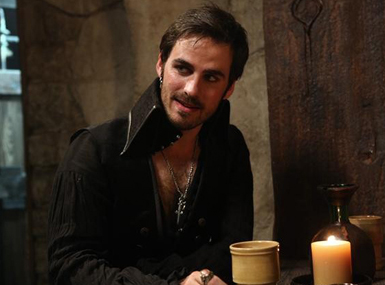 The long-standing feud of Rumplestiltskin (Robert Carlyle) and Captain Hook (Colin O’Donoghue) has lasted centuries.  After Hook had the audacity to woo Rumplestiltskin’s wife away from him, in a fit of jealous rage, Rumplestiltskin ripped out his wife’s heart and sliced off Hook’s hand; thereby creating the infamous moniker for the pirate formerly known as Killian Jones — Hook.  It was a long time coming, but after patiently waiting out the 28 years trapped by the curse in the fairytale land, Hook along with his cohort Cora (Barbara Hershey), finally found a way, using the giant’s magic bean to open a portal to Storybrooke – allowing Cora to reunited with daughter Regina (Lana Parrilla) and to unleash their terrible vengeance on the unsuspecting citizens of Storybrooke.

Aligned out of their mutual desires to slay the “crocodile,” Cora and Hook each had diabolical plans for their nemesis, Rumplestiltskin, who was now known as Mr. Gold (Robert Carlyle).  Cora wanted Gold’s dagger so that she could either control the Dark One so that he would do her bidding, or even worse yet, to become the Dark One herself after killing Gold.  But Hook had a different approach, he first tried to destroy that which Gold held most dear to him – Belle’s (Emilie de Ravin) memory of Gold.

On that fateful day as Gold prepared to cross the Storybrooke line to go in search of his son, Belle stood nearby offering her moral support – which, alas, put her right in harm’s way as Hook suddenly appeared, shooting Belle, which sent her over the curse line into the human world – promptly wiping all memory of her former life and her love for Gold/Rumplestiltskin.

But that was not enough for Hook.  He had stolen Belle’s love from Gold for only just a moment.  He knew that Gold would find a way to cure Belle’s memory-loss eventually.  Thus, he must find another way to wreak his revenge.  And as every pirate knows that if you first don’t succeed, try, try again.  So Hook took the opportunity to attack Gold when he was at his most vulnerable in the human world, leaving Gold grievously injured and dying from one swipe of his poisoned hook.

But that was only the first back-up plan. Hook had another diabolical plan in place if Gold did not die from the poison.  In fact, Gold may ultimately wish he had succumbed to the easier death, by poison, than to have his heart ripped out.  No, Hook will not be so crass as to literally rip out Gold’s heart, he will employ a more delicate and devastating method – Hook will simply break Gold’s heart (again) by stealing Belle’s love.  Since Belle cannot remember her former life due to the effects of Regina’s curse still lingering in Storybrooke, Belle will be someone else entirely as her curse-persona takes over.  And Hook is only too good at wooing woman who are looking for a life of adventure.

That will be his ultimate revenge.  Death is too easy.  If Hook had to live centuries with his pain and loss, then Gold must do the same.  It will break Gold’s heart to see Belle/Lacey falling under Hook’s spell – just like Rumplestiltskin’s wife had done all those years before.  Making Hook’s revenge a perfect 3-prong strategy: steal Belle’s memories, fatally wound Gold so that Cora may strip him of his powers, and then to make Gold suffer as the love of his life is stolen from him.

At the recent PaleyFest event in celebration of ONCE UPON A TIME, there was an interesting curiosity noted, which you can see for yourself in these photos.  Emilie de Ravin and Colin O’Donoghue did their best to keep this upcoming plot twist a secret, even trying to sit as far apart as possible in order to not give away clues to the upcoming story of Lacey and Hook.

Then if you listen carefully to the following interview with Emilie de Ravin, she also does her best to dance around the question of whether Gold will win back Belle’s love.

There is nothing more heart-breaking and cruel than love lost.  Songs, poems, and stories have been written for centuries about the power and pain of lost love.  And that will be Hook’s ultimate revenge. By stealing Belle’s love, and being an instrument in stripping Gold of his powers, Hook will finally have his revenge.  Only then.

But for fans of the show, it will break our hearts too.  The love story of Belle and Rumplestiltskin (the beauty and the beast) has charmed us all and we fell in love with them. We shall be heartbroken.  How dare that scoundrel Hook be so vengeful?  Or perhaps there will be a silver-lining in this diabolical plot – perhaps Hook will find he can love again and that his grieving heart will finally be at rest.  Would it be wrong to deny him true love if he should find it in the most unexpected of places?

This is all wild speculation, but it fits the ONCE UPON A TIME story, as we know it.  So hold onto your hearts, and be on the look out for the clues, which shall reveal whether Hook does indeed pursue his ultimate revenge.