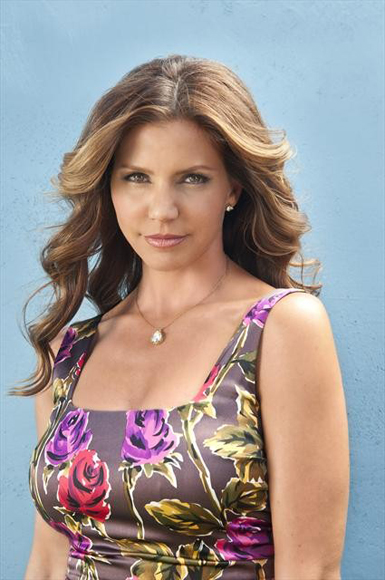 In the ABC Family series THE LYING GAME, the adults seem to be harboring deep, dark secrets and operating with suspicious motives.  Queen of them all is Rebecca Sewell, deliciously portrayed by Charisma Carpenter.  In an exclusive interview, Charisma shared what she loves about playing such a duplicitous and scheming character and weighs in on the shifting love-triangle involving Rebecca, her current husband Alec (Adrian Pasdar) and her lost love Ted (Andy Buckley).

On THE LYING GAME, you got the plum role of Rebecca. How much fun is that to play?
CHARISMA:  It’s crazy fun.  No complaints.

She comes across so diabolical in controlling everything, but somehow that feels like another red-herring.
CHARISMA:  I know! I sometimes wish I could get in the writers’ heads and see where they are taking her and what’s really going on. I think that’s kind of the tricky part of playing her — that hopefully she is not one-note.  Hopefully, you have glimpses of humanity mixed in with her diabolical tendencies.

Do you feel that her motives are more pure and more out of love to reunite her family, or do you feel like her motives are along the revenge side of things?
CHARISMA:  It’s kind of odd. It seems as more things are revealed and what that indicates to me is that it’s less and less about being with her family and more about revenge.  But I don’t think it was always being portrayed that way — that the writers intended to portray her initially with the intention to reunite her family.  But now as time goes on and we’re deeper and deeper into Season 2A, it feels like she’s just more and more confused as to her intentions.  She wants Ted back, she wants Kristin (Helen Slatter) to suffer, she wants to control everybody and remind them that she’s in control or else.  It’s starting to feel like there’s some tension between her and her daughter Sutton.  So as the season unfolds, I find that her initial excuse for her behavior to reunite her family is weaker and weaker.

Do you miss that? Do you miss Rebecca’s warm mothering instinct to reunite her family?
CHARISMA:  Do I miss it as far as portraying that? I think it’s important to have the character portray both.  You need to keep her vulnerable and grounded in a sense because that’s what a well-fleshed out character is like. People are complicated. They are layered and we’re not all one thing.  So if we start to get heavy on side, then it is important to get back to her humanity and the groundedness of her relationships and the genesis of it all, which was supposed to be with her daughters and to reunite her family as it once was.  So that’s important for me as the person owning the character.

Do you find it ever tricky telling the Sutton and Emma characters apart ’cause Alexandra Chando seems to be able to seamless go between the two characters?
CHARISMA:  Actually, I haven’t worked with her as Emma before. It’s always been Sutton.  But I’d be very interested to see how that works out when I do — especially how that relationship affects the future of my character.

One of the things that we have enjoyed with Rebecca is, of course, the sparring with Alec.  How much fun is it for you and Adrian to do those kinds of cat-and-mouse scenes?
CHARISMA:  This season we didn’t work together very much beyond the first couple of episodes. So it’s really just been Rebecca and Sutton, and Rebecca and Ryan’s [Rottman] character Jordan.  So it’s been Rebecca with the kids a lot.  I really have fun working with Adrian. I think Adrian is one of those actors that raises the bar for everyone. In fact, in one of the last episodes when Alec and Kristin had their scene in the hotel and they were going to be together, but it was after Ted had this big scene at the house and she’s a basket-case and she goes anyway. Yet then she tells Alec that she can’t go through with it — that was absolutely heart-breaking. I think that when we get the opportunity to work Adrian, I feel like he’s so present and in the moment, and he is not regimented or confined by the words so much. Just so long as the message of the scene gets across.  I think that kind of liberty can be frustrating for other actors or the writers, but I enjoy it very much.

Speaking of Rebecca and the many men of her life, do you think Ted or Alec is better suited for her?
CHARISMA:  I really don’t get the Rebecca/Ted relationship. I don’t know what it was, but a lot of times people are together and you think, “Well, that’s an odd coupling.”  But you don’t know what that person feels for the other person emotionally.  So I don’t know what Ted has to offer Rebecca and I look forward to exploring that. But I think in terms of being a good match in every way, I just know that Rebecca are just meant for each other.  They stimulate each other in terms of the mind-games.  You know that they are probably very — I don’t how to put this appropriately — they are like bobcats between the sheets. (Laughs) They are very passionate and they are challenging for each other.  Like, “Is he mine or is he not mine? Is he with her?” I feel like you can’t trust Alec and you can’t trust Rebecca, therefore they should be together.

Then as a mom, how would you advise Emma on the men of her life? She’s kind of torn between Ethan (Blair Redford) and Thayer (Christian Alexander).
CHARISMA:  I though the scene — again Helen knocked it out of the ballpark — when Kristen sits down with Emma and she was basically telling her daughter,  “When I was younger, I had this preconceived idea of how my future was supposed to look, and I made this choice based on safety and all these things that I thought were good for me. But I never go to have fun. I never got to live. I never lived in the moment.” And all of these thrilling things that Alec offered her, she denied herself for safety and then it all blew up in her face.  Like, “I made the safe-choice and look how the safe-choice turned out.  He is a suspect in a murder investigation.  He’s got anger issues.  He cheated on me. He lied to me for 17 years. He’s stealing money from me. You cannot go through life denying yourself what feels organic and what’s true and right.”  I thought that was a beautiful scene between them.  It was really well-written. I think as the season goes on, it just gets better and better.  Those conversations that need to be had and when they are, and when they air, it’s so fulfilling for the fans and for me because I’m invested too. I watch every episode thinking, “Wow, that was great!” Like when you see it all put together, you’re like, “That was amazing.”

What would you say is one quality about Rebecca that you really like?
CHARISMA:  One of the things I really admire about her is her commitment. Now matter how misguided her commitment may be, she’s 110%.  I really admire that sort of tenacity. That sort of laser focus.  Like on just sheer will alone, things will happen.  I think that’s a beautiful thing.  Hopefully you don’t hurt people in real-life as you go about doing it, but the passion was there and I loved that.

It feels like the big finale coming up will showcase some big exposure, whether it is about the twins or it’s about Rebecca. Something big is definitely brewing.  Maybe you could tease a little about that?
CHARISMA:  There’s definitely a couple humdingers coming.  Obviously, Dan’s bride Teresa (Yara Martinez) is missing and presumably found dead. But the fact that we’re still talking about Derek’s murder which is unsolved, I’m looking forward to that wrapping up and learning who is the actual killer. Then what is going on between Thayer and Alec?  All of that anger and hostility between him and his dad. Will there be a confrontation and what will it look like when Rebecca and Emma ever do come together now that Emma knows she is her mom?  Especially now that she knows Sutton and Rebecca have been lying about it.  So when is Emma going to confront her about that? Like, “Wait a minute, you’re my mom and you knew you’re my mom all this time and you never told me? But then why didn’t you seek me out?”  I really look forward to all of this coming out.  But obviously it has to be piecemealed and lord knows when it’s all going to take place.  But I look forward to it and I look forward to the fans’ response, for sure.

To see what big reveals are exposed and who Derek’s murdered is, be sure to tune in for the epic mid-season finale of THE LYING GAME on Tuesday, March 12th at 9PM on ABC Family Channel.