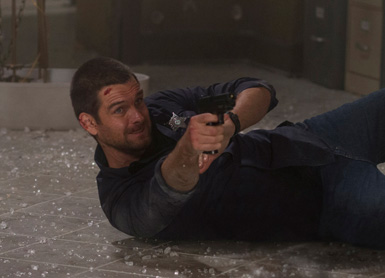 Very few television shows can actually lay claim to the charmingly descriptive use of Lewis Carroll’s phraseology, but Cinemax’s BANSHEE was smart enough to actually name their villain “Mr. Rabbit.”  With the octane-fuelled and intense season one finale knocking at the door, fans that have embraced the series are finally going to be rewarded with a final confrontation with uber-villain Rabbit (Ben Cross) versus reluctant-hero Lucas Hood (Antony Starr).

As faithful viewers already know, neither Rabbit or Hood bears their true name and hides behind a moniker befitting their illusory masks in order to instill fear or trust in those around them.  Rabbit seeks to terrorize all those around him in order to keep control of his criminal organization; and Lucas seeks everyone’s trust so that they will not suspect his true identity and dark past.  So names, like Lewis Carroll was infinitely aware, are powerful.  Just why a criminal would choose the name “Rabbit” still confounds us.  But perhaps it is meant to be an Americanization of something as simple as Rabinowitz; and surely, the name Rabbit sounds a bit more terrifying.  Or perhaps it was meant to be more reassuring and less threatening for a man who has no heart.

Then there is the possibility that in BANSHEE the name “Rabbit” refers to the parable of the rabbit and the tortoise, an Aesop’s fable, in which the tortoise overcomes a stronger opponent through ingenuity and trickery.  It is also thought that the tortoise succeed through his steadfastness and willingness to bide his time.  The parable fits the tale of Rabbit versus Hood perfectly.  For Lucas bided his time patiently waiting his release from prison before seeking out his lost love. He also employed a clever scheme in assuming the local sheriff’s identity so that he could hide in plain sight and his propensity for violent resolution would be welcomed rather than reviled.  It also gave him a position of power from which to navigate in setting a trap for Rabbit.

BANSHEE has never been one to shy away from raw violence and if last week’s final scene is any indication, viewers can expect one hell of a gunfight to be unleashed within the bowels of the local sheriff’s office.  Fortunately, Lucas has used his time wisely since his release from prison and he has sought out alliances that could benefit him. He reconnected with his former lover Carrie (Ivana Milicevic) and former friend and computer-hacker extraordinaire Job (Hoon Lee), both who would help him without question or hesitation; he befriended a local ex-prize fighter Sugar (Frankie Faison) who was just itching for something more out of life; and he reached out to the local crime boss Kai Proctor (Ulrich Thomsen), who knew the value of having an inside-man in law enforcement.  Alliances are key.  It also helps provide the element of surprise when confronting a superior enemy that has one out-manned and out-gunned.

With the promise of explosive action, bullets flying, bones breaking, and perhaps an ending that no one saw coming, BANSHEE invites fans and viewers to tune in for its epic first season finale on Friday, March 15th at 10PM on Cinemax. (11PM on TMN in Canada)